A. Raja Had Actual Dominion Over 2G Policy Matters: CBI to Court 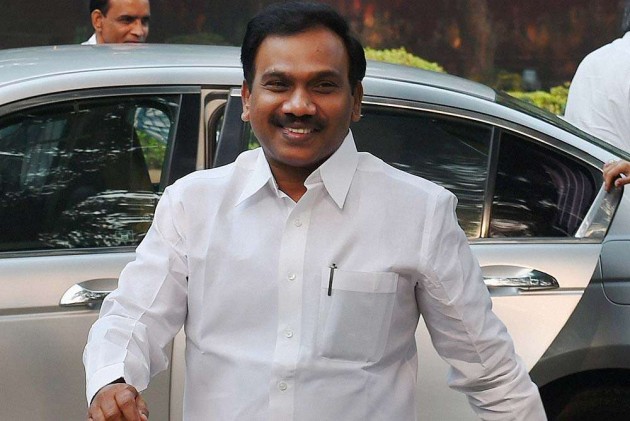 CBI today told a special court that being the then Telecom minister, A Raja had "actual dominion" over policy matters pertaining to allocation of 2G spectrum and he had accepted it during his defence in the case.

Continuing the ongoing final arguments in the 2G spectrum allocation case in which Raja and 16 others are facing trial, special public prosecutor Anand Grover said "actual dominion on policy matters vests with the cabinet minister."

"Minister was given the full dominion on deciding policy issues and it was said that Department of Telecommunications (DoT) should act on any policy matter with prior approval of the minister," Grover told Special CBI Judge O P Saini while referring to a letter written by cabinet secretariat to DoT.

He also cited the statement given by Raja in court saying even he had "accepted" that the cabinet minister was the final authority on any policy matter.

Grover highlighted the objective of the New Telecom Policy (NTP) of 1999 and said it was envisaged by the Centre for the interest of the public at large and the interest of consumers in particular.

NTP 1999 was envisaged for enhanced competition in the sector which would have brought down services at affordable price, he said.

"Level-playing field and competition were the most important and crucial factor in NTP 1999," he said.

The arguments remained inconclusive and would continue on September 1.

Earlier, CBI had told the court that NTP 1999 sought to increase competitiveness and transparency in the sector.

It had said that NTP 1999 was brought in place of the telecom policy of 1994 to faciliate more competition and participation of private sector.

CBI had earlier alleged that Raja had "misled" the then Prime Minister Manmohan Singh on policy matters pertaining to 2G spectrum allocation in conspiracy with others to favour certain firms.

CBI had alleged that favour was done to "ineligible" firms Unitech Wireless (Tamil Nadu) Ltd and Swan Telecom Pvt Ltd at the behest of Raja who had changed the first-come-first-served policy to suit them.

Besides Raja, DMK MP Kanimozhi and 15 others are facing trial in the case.

In its charge sheet, CBI had said that there was a loss of Rs 30,984 crore to the exchequer in allocation of 122 licences for 2G spectrum which was scrapped by the Supreme Court on February 2, 2012.

The court had on October 22, 2011, framed charges against them under IPC and Prevention of Corruption Act dealing with offences of criminal conspiracy, cheating, forgery, faking documents, abusing official position, criminal misconduct by public servant and taking bribe.

The offences entail punishment ranging from six months in jail to life imprisonment.