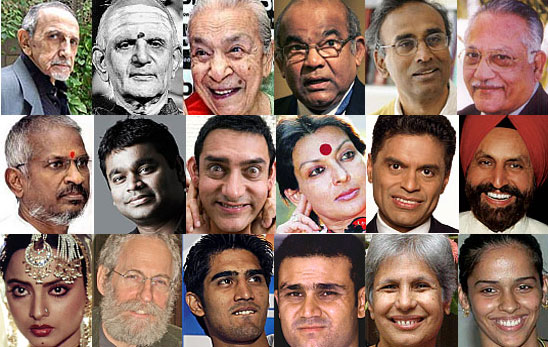 NRI hotelier Sant Singh Chatwal, who until recently was facing trial for alleged bank fraud, and had also been arrested briefly.  made it to the list of Padma awardees -- and that too a Padma Bhushan, the country's third highest civilian award-- announced on the eve of Republic Day.

Another award that raised some eye-brow was yet another Padma Bhushan, this time for "social work" to Sri Balagangadharanath Swamiji of the Adichunchunagiri Mutt in Karnataka.

There were a total of130 awards including 13 in the category of Foreigners/ NRIs/ PIOs. These comprise 6 Padma Vibhushan, 43 Padma Bhushan and 81 Padma Shri awards. There are 17 ladies among the awardees.

Noted US-based journalist Farid Zakaria gets Padma Bhushan in joyrnalism category while Prof Tan Chung and Prof A J Paulraj get the award in literature and education and science and engineering respectively. Both are also from the US.

Another Planning Commission member Abhijit Sen and S K Bandyopadhyay have been named in the public affairs category of Padma Bhushan.

In the trade and industry category Venu Srinivasan of the TVS Group, Alluri Venkata Satyanarayana Raju, B Raveendran Pillai, Deepak Puri, Irshad Mirza and Kapil Mohan have been selected for Padma Shri awards.