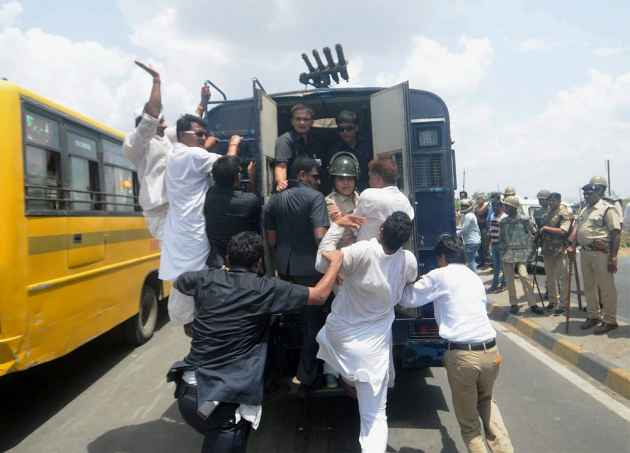 A delegation of the Aam Aadmi Party was on Friday stopped here by the police from entering Mandsaur, hit by violent farmers' agitation, a day after Rahul Gandhi and other Congress leaders were turned back by authorities.

The delegation consisting of Sanjay Singh, Bhagwant Mann, Somnath Bharti, Ashutosh and the party's Madhya Pradesh unit convener Alok Aggarwal sat on a dharna in Dhodhar area of Ratlam district after officials denied them entry into Mandsaur as curfew had been imposed there and told them it would not be safe.

Jaora city SP Deepak Kumar Shukla said the AAP leaders were not allowed to enter Mandsaur and sent back from Ratlam.

The AAP leaders also spoke to some of the farmers who have been protesting since June 1, seeking loan waiver and higher prices for the farm produce among other things.

Mandsaur has been kept out of bounds for political leaders by the state administration in the wake of wide spread violence following the death of five farmers in police firing during the agitation.

"We were going to meet the families of the deceased farmers and did not have any intention to disrupt the law and order in Mandsaur but even then we were stopped," Sanjay Singh said.

He demanded chief minister Shivraj Singh Chouhan's resignation and also hit out at Prime Minister Narendra Modi for "keeping mum" on the issue.

"He (Modi) tweets immediately on issues from all over the world but has not uttered a single word in solidarity with the farmers in Mandsaur," Singh said.

"The farmers in the country are facing tough times. Those from Tamil Nadu had to protest in Delhi while the ones in Mandsaur had to face the bullets. It's high time that the Centre waives loans of farmers across the country," he added.

Congress vice president Rahul Gandhi was on Thursday arrested as he tried to enter Mandsaur from Neemuch district, about 400 km from the state capital Bhopal. He was later released along with his 250 supporters on the border with Rajasthan.

Earlier in the day, Mandsaur SP Manoj Kumar Singh had said prohibitory orders are in place in the entire district and entry of outsiders will be restricted.

The SP had said the AAP leaders will be arrested if they try to enter the district.

He said anti-social elements were involved in the breach of peace in the district and 156 persons have been arrested so far in connection with cases of arson and vandalism.

"We are with the farmers but will take action against those who resort to violence. Anti-social elements were involved in violence," he said.