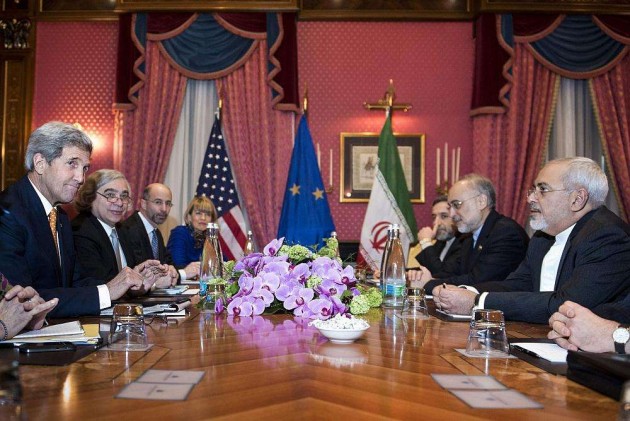 outlookindia.com
-0001-11-30T00:00:00+0553
After marathon talks, the world powers and Iran today agreed on the framework of a potentially historic deal aimed at scaling back Tehran's nuclear programme and relieving the Islamic Republic from the sanctions.
"We have taken a decisive step. We have reached solutions on key parameters on a Joint Comprehensive Plan of Action (JCPOA)," High Representative of the European Union for Foreign Affairs Frederica Mogherini said at a joint press conference with Iranian Foreign Minister Javad Zarif in Swiss city of Lausanne.
"This is a crucial decision laying the agreed basis for the final text of the JCPOA. We can now restart drafting the text and annexes of the JCPOA guided by the solutions developed during these days," she said.
The framework will limit Iran's enrichment capacity, enrichment level and stockpile will be restricted for "specific durations" and "there will be no other enrichment facility than Natanz", Mogherini said.
"Iran's research and development on centrifuges will be carried out on a scope and schedule that has been mutually agreed," she added.
The nuclear facility at Fordow will be converted from an enrichment site to a nuclear physics and technology centre and there will not be any fissile material at Fordow.
The weapons grade plutonium facility will be dismantled.
The robust inspections of Iran's uranium supply chain will last for 25 years.
Iran has agreed to reduce its current stockpile of about 10,000 kg of low-enriched uranium (LEU) to 300 kg of 3.67 per cent LEU for 15 years.
"An international joint venture will assist Iran in redesigning and rebuilding a modernized heavy water research reactor that will not produce weapons grade plutonium. The spent fuel will be exported," said Mogherini.
The International Atomic Energy Agency (IAEA) "will be permitted the use of modern technologies and will have enhanced access through agreed procedures including to clarify past and present issues," the EU foreign policy chief said.
The Iranians who have been particularly concerned about the lifting of the sanctions — particularly the financial sector sanctions and the trade sanctions — some of the most draconian sanctions of the UNSC which has crippled their economy, had a major diplomatic success. MORE
Mogherini said, "The EU will terminate the implementation
of all nuclear-related economic and financial sanctions and the US will cease the application of all nuclear-related secondary economic and financial sanctions simultaneously with the IAEA-verified implementation by Iran of its key nuclear commitments.
"A new UNSC resolution will endorse the JCPOA terminate  all previous nuclear-related resolutions and incorporate certain restrictive measures for a mutually agreed period of time."
Obama called the framework for an agreement "historic" and said this will cut off every pathway to a nuclear bomb.
The statement has brought to an end a nerve-wracking round of talks at the historic Beau-Rivage hotel which has been ongoing for the last week carrying on late into the night and yesterday ending early morning.
The talks were attended by all the P5+1 foreign ministers and negotiators from the US Energy Secretary Ernest Moniz, Under Secretary of State for Political Affairs Wendy Sherman and from the Iranian side including head of Atomic Energy Organization of Iran Ali Akbar Salehi, deputy Foreign Minister Abbas Araghchi, the President Hassan Rouhani's brother Hossein Fereydoun and Majid Takht Ravanchi.
The week-long round of talks saw all the powerful foreign chiefs of the P5+1 fly in and out of Lausanne, but for US Secretary of State John Kerry and Foreign Minister of Iran Zarif who have been in Swiss lake city for the whole week.
UK Secretary of State for Foreign and Commonwealth Affairs Philip Hammond looked exhausted towards the end, while Foreign Minister of China Wang Yi was seen out on a jog.
Russian Foreign Minister Sergey Lavrov visited Lausanne twice during the week. Both Kerry and Zarif were seen going out for long walks separately over the course of the week.
Moniz and Salehi both of whom were once in MIT at the same time — Moniz as a professor and Salehi as student — saw themselves at the opposite ends of the negotiating table since their last meeting a decade back and are said to have spent at least 30 hours along hammering out the technical details of a possible nuclear agreement.
The self-imposed March 31 deadline has been postponed three times before since November 2013.
The nuclear talks which has seen much drama among Saudi Arabia, the US and Israel, now has a deadline of the end of June to whip up an agreement with all the technical annexes.
In his press conference, Kerry said Iran will reduce number of centrifuges by 2/3 and no new enrichment facilities will be build for the next 15 years.
He said Iran can only enrich uranium by 3.67 per cent for the next 15 years. He also said that the sanctions will "snap back" in case Iran breaches the agreement.
Continue FREE with Ads Pay Rs. 1 to Read Without Ads
READ MORE IN:
International
Next Story : BJP Requests Puducherry Planning Authority to Inspect All High-Rise Buildings
Download the Outlook ​Magazines App. Six magazines, wherever you go! Play Store and App Store