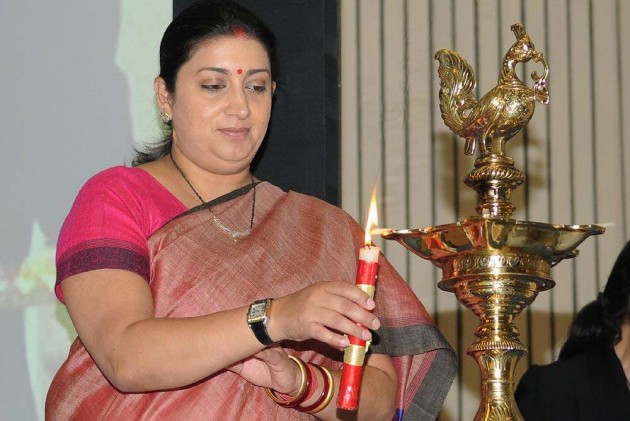 Print
A
A
A
increase text size
Outlook December 15, 2014 13:12 IST Uproar in Parliamanet Over 'Order' to Keep Schools Open on X'Mas Day

The Union HRD Ministry was today at the centre of a controversy over a circular by Navodya Vidyalaya Samiti(NVS) asking all its schools to observe December 25-- X'mas day--as 'Good Governance Day' that led to an uproar in Parliament.

As the issue generated heat both inside and outside Parliament, Government moved on multiple fronts to defuse the row, clarifying that all schools including Jawahar Navodaya Vidyalas (JNV) will remain closed on December 25. It also denied a media report suggesting the schools would remain open on Christmas Day to observe 'Good Governance Day'.

"This is to clarify that CBSE has not directed any schools to remain open on December 25. All schools will follow their vacation schedule including holiday on December 25 as specifically clarified by CBSE," a press statement issued by the Human Resources Development(HRD) Ministry said.

It said CBSE has neither issued any circular on its website nor issued any instructions to any schools for remaining open on December 25.

"In view of this, no child or student will be deprived of celebrating the holidays or vacations or participating in their own festivals and religious festivals wholeheartedly".

The Rajya Sabha was adjourned thrice during the pre-lunch session following pandemonium over the circular while the Lok Sabha witnessed an uproar.

In a circular dated December 10, the NVS--which falls under the HRD ministry--has asked its schools to celebrate the birthday of former Prime Minister Atal Bihari Vajpayee as well as Madan Mohan Malaviya on December 25 "in its true spirit" by holding activities like declamation contests, quiz competitions and screening of documentaries related to good governance.

"You are requested to ensure that Good Governance Day is celebrated in all JNVs under your region," the circular issued by NVS Commissioner G S Bothyal to the Principals of all JNVs said.

"It is unfortunate that misreporting has been deliberately done...Controversy has been created to grab headlines.

"December 25 is Christmas and will be celebrated like that and schools will be shut," she told reporters.

The intention is to make me keep on giving explanations on this, she said.

Irani said the essay competition that the schools JNVs would be organising would be "voluntary" in nature and conducted online.

"All schools closed for X'Mas, essay competition only online," she tweeted separately.

The CPI-M termed as "offensive and unjustifiable" the move to keep schools open on Christmas and demanded its withdrawal saying it was an "assault" on the religious right of Christians.

The NVS circular had said CBSE would also be organising competitions under its expression series on good governance on December 24 and 25 and it was open to all schools under the Board.

The circular said screening of documentaries and films on best practices in good governance and organisation of various activities through child cabinets in schools would be organised.

The circular issue triggered an uproar in Parliament with members from Congress, AIADMK and Left Members demanding an explanation from the Government.

Parliamentary Affairs Minister Venkaiah Naidu clarified in Lok Sabha that no circular has been issued in this regard while Finance Minister Arun Jaitley asserted in Rajya Sabha that the report is factually false.

The CPI-M in a statement said the HRD Ministry has taken "yet other offensive and unjustifiable decision".

"Already the Navodaya schools' management have decided that the schools will remain open on December 24 and 25.

"This is a crude interference in the schedule of schools which go on Christmas vacation from December 24 and is an assault on the religious right of the Christian community," the CPI-M Politburo said.

It demanded "withdrawal of this communally motivated instruction" and said if the government wants to observe 'good governance day' on December 25, it should do so without involving the schools.

Stating that the media report gives a "distorted impression" that schools have been asked to remain open, the HRD ministry statement said the essay competition as part of the good governance day is "completely voluntary" and students if they so desire can participate from their homes and any other places which provides online access.

"There is no requirement for any school to remain open on that day (Christmas Day) and the school vacations will be adhered to," the statement said.

Talking about the JNVs, the statement said "in such schools, since it is a public holiday on December 25, the schools will also remain closed that day as no classes will be held".

As a residential school, however, the school functions because children continue to remain there and those children will have the opportunity to participate if they so wish in the essay competition.

Navodaya Vidyalaya Samiti has clarified that no other activities for this competition is being held except the opportunity to submit their essay online voluntarily, the statement said.

It also clarified that that since the vacation pattern of JNVs depend on climatic conditions, December 25 will be celebrated in those schools which do not have any winter break.

No CBSE official is required to come to office for specifically conducting essay competition as the essays will be received online through the specified time schedule.