US: Indian Sentenced to Death for Killing Baby and Her Grandmother 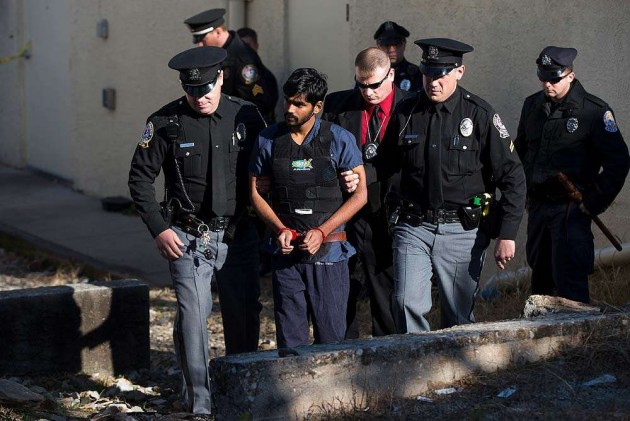 Print
A
A
A
increase text size
Outlook October 15, 2014 14:20 IST US: Indian Sentenced to Death for Killing Baby and Her Grandmother

A 28-year-old Indian IT professional-turned frequent gambler has been sentenced to death in the US for the gruesome killing an Indian baby and her grandmother in a 2012 kidnapping plot that went horribly wrong.

Raghunandan Yandamuri was convicted by a Montgomery County Court jury of first-degree murder in the stabbing death of Satyavathi Venna, 61, and the suffocation death of her 10-month-old granddaughter, Saanvi Venna, in King of Prussia, Pennsylvania.

During the trial, Yandamuri showed no remorse and said he would rather accept the death penalty than sit through arguments.

The jury, which deliberated for about three and a half hours yesterday, could have chosen to sentence Yandamuri to life in prison without the possibility of parole but in making their decision, the five women and seven men considered aggravating factors such as the elements of Yandamuri's crimes and mitigating factors such as testimony regarding his gambling addiction and mental state.

Formal sentencing will be scheduled within 45 days.

Philly.com reported that Yandamuri had no visible reaction to the announcement as he looked down and continued scribbling notes, as he had for much of the month-long trial in Norristown, when the verdict was read.

Last week, Yandamuri told Montgomery County Court Judge Steven O'Neill that he would rather take the death penalty than sit through the sentencing hearing.

Yandamuri had maintained his innocence throughout, showing no emotion during the trial even during times the jurors were moved to tears as evidence of his gruesome crime was presented in court.

"It's not going to give them back what they lost, but it is a sense of closure for them," Cauffman said.

Yandamuri had decided to represent himself for the first phase of the trial and Henry Hilles his attorney for the trial's sentencing phase said he was disappointed but that he had prepared Yandamuri for the possibility of the death penalty.

"I felt that if he had expressed remorse, he would have had a better chance at saving his life," Hilles said, adding that it was unclear whether Yandamuri would represent himself when he appeals the verdict.

Prosecutors said Yandamuri, a former IT professional who emigrated from India on a work visa, plotted to kidnap the child for ransom to feed his gambling habit and killed the grandmother when she got in his way.