Afghan Civilian Casualties Up By 24% This Year So Far: UN 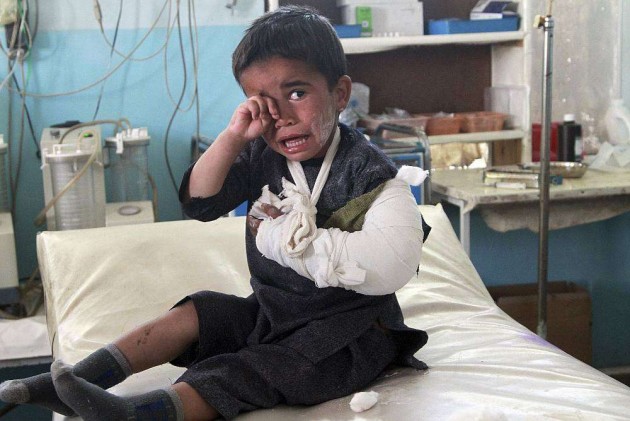 Civilian casualties in Afghanistan soared by 24 per cent in the first half of 2014, according to UN figures released today, revealing worsening nationwide violence as US-led troops leave after more than a decade fighting the Taliban.

Ground combat is now causing more deaths and injuries than improvised explosive devices (IEDs) in a worrying sign of spreading conflict, the UN report said, with women and children increasingly caught in the crossfire.

"The nature of the conflict in Afghanistan is changing in 2014 with an escalation of ground engagements in civilian-populated areas," warned Jan Kubis, the United Nations mission chief in Afghanistan.

"The impact on civilians, including the most vulnerable Afghans, is proving to be devastating."

In the first six months of this year, UNAMA documented 4,853 civilian casualties -- up 24 per cent over the same period in 2013. The toll included 1,564 deaths and 3,289 injuries, with ground engagements causing two out of every five civilian casualties in 2014.

The grim figures underline the fragile security situation Afghanistan faces as it wrestles with political turmoil over its disputed presidential election. One candidate, Abdullah Abdullah, has refused to accept the result and fears are growing of ethnic tension and clashes between rival supporters.

Recent weeks have seen fierce fighting in the southern province of Helmand, with the Afghan army and police counter-attacking after an offensive by 800 Taliban fighters in an area from which US troops withdrew only in May.

With NATO troops pulling out, the coming months are expected to be a test of the fledgling Afghan government forces, trained by the US-led military coalition since the Taliban were ousted in 2001.

"The fight is increasingly taking place in communities, public places and near the homes of ordinary Afghans, with death and injury to women and children in a continued disturbing upward spiral," said Georgette Gagnon, director of human rights for UNAMA.

In May, the International Crisis Group (ICG) said that the troop withdrawal had coincided with renewed tribal feuds, government forces fighting each other and mistreatment of locals by Afghan soldiers and police.

The ICG concluded that "the overall trend is one of escalating violence and insurgent attacks" in Afghanistan, with insurgents now able to mass in larger numbers and trying to capture rural territory and district administration centres.