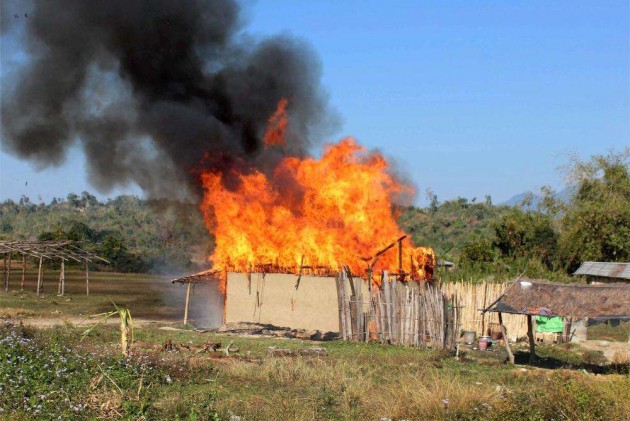 Violence spread in Assam today as the toll in the massacre of tribals by Bodo militants rose to 65 including 21 women and 18 children, sparking a retaliation in which Bodo homes were torched and a police station attacked leaving three more tribals dead allegedly in police firing.

According to reports, two Bodos people were killed when the Adivasi people burnt a number of houses belonging to the community in Kokrajhar district. There was no official confirmation of the deaths.

Violence spread to a fourth district--Udalguri--when the militants of the anti-talks NDFB(S) who were behind the ethnic violence in three districts yesterday fired at villagers and burnt houses injuring one person. The attack triggered another round of retaliation in which the Adivasis set ablaze over 60 huts of Bodo people at Lamabari and Udalguri weekly market.

As authorities mulled an offensive against Songbijit faction of National Democratic Front of Bodoland (NDFB), Union Home Minister Rajnath Singh called the carnage as a "terror" act and that it will be dealt with accordingly.

Army has been deployed in all the violence-hit areas and is 'actively' involved in maintaining law and order situation since last night, a defence spokesperson said.

Curfew has been clamped in all the disturbed areas under Sonitpur, Chirang and Kokrajhar districts, police said.

Singh rushed to Guwahati to review the situation at a meeting with Chief Minister Tarun Gogoi and top security officials.

37 people were killed in Sonitpur district, 25 in Kokrajhar and three in Chirang district after heavily armed militants belonging to NDFB swooped down on remote Adivasi villages of the three districts last evening, Police said. Among the dead, 21 were women and 18 children, it said, adding 15 people were also injured.

The Centre said it was rushing about 5,000 paramilitary personnel at the request of Assam Government even as the Chief Minister asked for more security personnel.

Around 2,500 people have fled their homes and are staying in relief camps after the attack, an official said.

An all-out offensive will be launched against NDFB militants jointly by police, paramilitary forces and army in the wake of the violence, sources said in Delhi.

The decision was taken at a high-level meeting chaired by Rajnath Singh in Delhi and attended by top officials of Home and Defence ministries and paramilitary forces, they said.

Even as Gogoi said firm steps were being taken to prevent the situation from escalating, violent protests by Adivasis erupted against the killings.

The protestors, armed with bow and arrows, were marching towards the police station in Dhekajuli town and despite repeated appeal by police to stop, they marched on and attempted to storm the police station, he said.

Police initially attempted to disperse the protestors by resorting to lathicharge, but opened fire when the situation worsened, the official said.

Three persons were killed and several others injured in police action, he said.