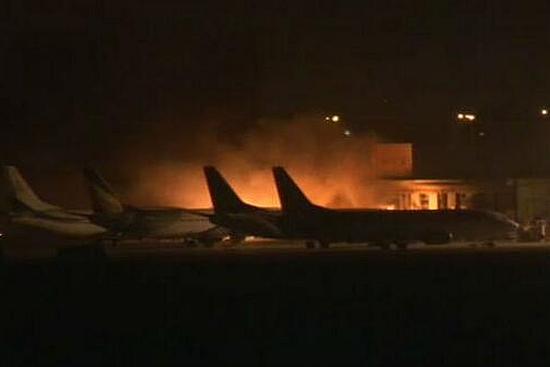 After a 13-hour intense gun battle, the brazen attack on Karachi international airport by Taliban militants disguised as security forces ended today, leaving 29 people dead, including all the 10 terrorists who were planning for a lengthy siege of the key facility.

Explosions and gunfire rang out as the attackers wearing military uniforms and suicide vests, and armed with grenades and rocket launchers attacked the airport in Karachi, Pakistan's biggest city and financial hub.

During the gunfire exchange, the airport terminal was shut down and all flights were diverted. Heavy plumes of smoke and fire could be seen rising from inside the runaway area where the terrorists took cover in the hanger and engineering workshops.

Several loud explosions were also heard but the spokesman confirmed that no aircraft was damaged nor any important assets or installations damaged during the operation.

According to reports, 11 ASF personnel, two Rangers officials, one police officer and four Pakistan International Airlines (PIA) officials are among the dead.

Twenty-four people have also been injured. However, no passengers were injured in the attack on the terminal used for VIP flights and cargo.

After regaining control of the sprawling airport, spokesman for the paramilitary Rangers Sibtain Rizvi, told reporters, "The attack is over and we have cleared the area of all militants."

"Karachi airport has been cleared and handed over to Civil Aviation Authority and the Airport Security Force," Major Bajwa said.

Earlier, the military had declared an end to its operation to secure the airport but were forced to relaunch an assault after fresh firing erupted.

A spokesman of the military's Inter Services Pubic Relations (ISPR) has reaffirmed that, "all 10 terrorists have been killed, the airport secured and they were unable to damage any aircraft or installations".

The ISPR spokesman said that army units from the nearby Malir cantonment base, ASF commandos, paramilitary rangers and police had carried out the joint operation to clear the area.

Sophisticated machine guns and rocket launchers were recovered from the terrorists who were being identified, the spokesman said.

Their backpacks were filled with food and ammunition. They were also carrying XStat devices which can heal gunshot wounds within seconds.

"Clearly they came with a long siege of the airport in mind," a source in the paramilitary Rangers told PTI.

He said they looked like Afghan, Uzbeks and Chechens but the actual identifications will be determined after DNA tests.

The outlawed Tehreek-e-Taliban Pakistan (TTP) has claimed responsibility for the attack.

"We carried out this attack on the Karachi airport and it is a message to the Pakistani government that we are still alive to react over the killings of innocent people in bomb attacks on their villages," TTP spokesman Shahidullah Shahid said in a statement to the media.

He said that the attack was also carried out to avenge the killing of former TTP chief Hakimullah Mehsud in a US drone strike.

He dismissed the Pakistani government's peace plan as a "tool of war".

Authorities later displayed for media the mangled bodies of the attackers and the weapons used by them.

Chief of Army Staff General Raheel Sharif lauded those who laid down their lives fighting terrorists.

"Those martyred include the ASF personnel, civilian engineers and personnel of CAA and PIA and a police officer while a dozen have also been injured and are admitted to hospital," said Sagheer Ahmed, the Sindh minister for health.

Defence Minister Khawaja Asif described the attack as cowardly and said it was another example of how terrorists were trying to destroy important installations and locations of the government.

"But I can tell you these terrorists will not succeed in their aims and will be defeated," Asif said.

The attack was reminiscent of the deadly attack carried out by some 15 militants of the Tehreek-e-Taliban in May 2011 on the Mehran Naval Airbase here in which the attackers killed some 18 personnel and damaged aircraft before being killed in a counter attack.

The attack came days after the peace process between the Tehreek-e-Taliban and the government broke down and a ceasefire announced by the TTP was called off.

Since then there has also been a major break in the TTP with the powerful Mehsud group announcing their separation from the militant outfit led by Maulana Fazlullah.

The Mehsud group commanders had warned of resuming attacks against the government and security personnel and installations.

The attack means that peace talks between the government and the Taliban are effectively dead and authorities would have to find a way to control the militants who have killed more than 40,000 people since 2004.

Immediately after the daring attack all flight operations were suspended from the airport with flights not taking off and those scheduled to land in Karachi were diverted to Nawabshah and Quetta or turned back to their original destinations.

Continue FREE with Ads Pay Rs. 1 to Read Without Ads
READ MORE IN:
International
Next Story : No Mass Support for Vidarbha: Sena on Gadkari's Comment
Download the Outlook ​Magazines App. Six magazines, wherever you go! Play Store and App Store