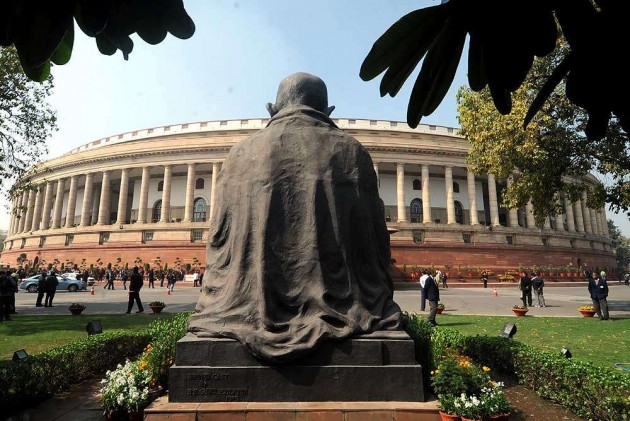 The appearance of a "strange- looking" visitor from the animal world inside the Parliament complex sparked panic within the heavily-fortified compound and threw the security staff there into a tizzy.

The palm civet, an endangered mammal which looks like a cross between a mongoose and a wild cat, was spotted in the Parliament library building, claimed Delhi-based NGO Wildlife SOS, whose staffers were summoned to safely remove the animal.

"Wildlife SOS received a call on their Delhi helpline from the Parliament House about a strange-looking animal that was inside the premises," a press statement said here, adding that the endangered arboreal mammal had strayed into the complex looking for shelter from the rain.

A rescue team from Wildlife SOS rushed to Parliament and confirmed that the animal, which was found hiding behind a TV set, was a Common Palm Civet (Paradoxurus Hermaphrodites).

Parliament sources said that the incident took place a few days back.

The palm civet is locally referred to as the "kabr bicchu" and is considered to have mythical aspects. The animal is itself completely harmless and largely nocturnal with an omnivorous diet, feeding on fruits and sometimes scavenging, said Wildlife SOS officials.

"Delhi is very fortunate to be home to such unique and endangered wildlife and we should all be working harder to ensure that green areas remain to provide these animals with cover and food," said Geeta Seshamani, the co-founder of Wildlife SOS.

The civet, which was found in a severely dehydrated condition, is currently under medical care and will be released back into its natural habitat after necessary observation procedures, the NGO said.

Kartick Satyanarayan, co-founder, Wildlife SOS, said, "It is the need of the hour to educate more people about wildlife conservation and habitat protection."