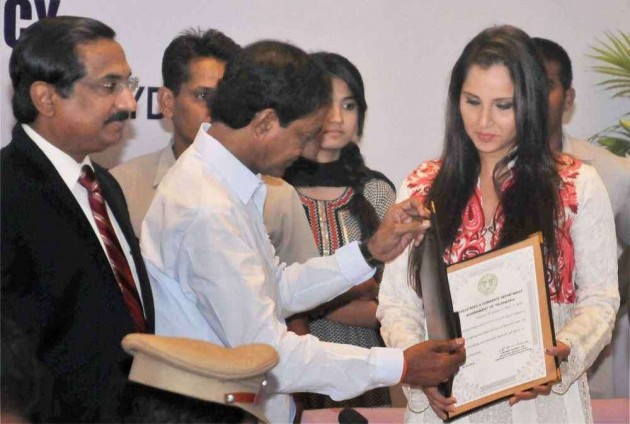 A Telangana BJP leader today stoked a controversy over Sania Mirza being made the new state's brand ambassador, calling her Pakistan's "daughter-in- law", sparking outrage and drawing a fierce response from the tennis ace who said she will remain an Indian until the "end of her life".

The comments by K Laxman, who also branded the 27-year- old tennis star as a "non-local" while questioning her appointment by the Telangana government, were roundly condemned by political parties who stressed that she is "our lady who belongs to Hyderabad".

Describing Sania as the "daughter of Hyderabad", Telangana Chief Minister K Chandrasekhar Rao had on Tuesday appointed her as the state's brand ambassador and handed over a cheque of Rs one crore.

"Sania was born in Maharashtra and settled in Hyderabad only later and, hence, is a non-local," Laxman, leader of BJP in the Telangana assembly, said in Hyderabad.

He also dubbed her as "daughter-in-law" of Pakistan, as she is married to Pakistani cricketer Shoaib Malik.

Sania, on her part, slammed attempts to tag her as an outsider and said her family had its roots in Hyderabad.

"My family belongs to Hyderabad for more than a century and I strongly condemn any attempts by any person, whosoever, to brand me an outsider," she said in a statement.

"It hurts me that so much precious time of prominent politicians and the media is being wasted on a petty issue of my being appointed the Brand Ambassador of my State of Telangana," Sania said.

"I am married to Mr. Shoaib Malik, who is from Pakistan. I am an Indian, who will remain an Indian until the end of my life," she said.

Condemning Laxman's remark, TRS leader in Lok Sabha Jitender Reddy said, "She is our lady. She belongs to Hyderabad...(If) she has married a Pakistani or an American...That doesn't (matter)...We can't say that she has gone out of her place. She is definitely our Hyderabadi."

Congress leader Manish Tewari regretted that a sportsperson of international repute like Sania is being subjected to this "ignominy".

In an apparent damage control, BJP quickly distanced itself from Laxman's statement, saying it was not the party position.

"This is not BJP's position," senior BJP leader and Union Minister of State for Information and Broadcasting Prakash Javadekar said.

The Telangana unit of the Congress too described Sania as unfit for the honour.

"Sania does not fit into the brand image of Telangana and Hyderabad," state Congress chief Ponnala Lakshmaiah said.