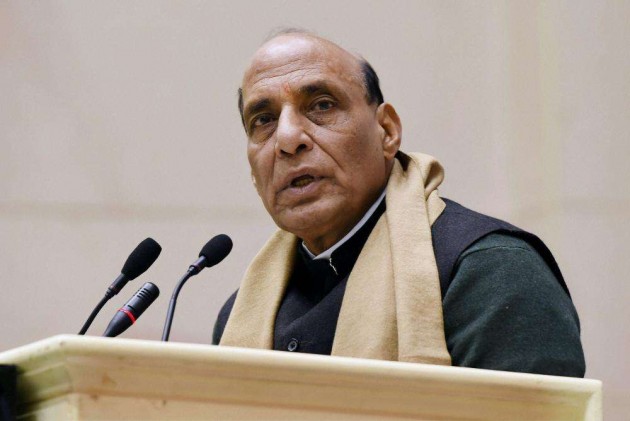 With questions over Coast Guard's 'boat' operation persisting, Home Minister Rajnath Singh today said those travelling in the Pakistani vessel were suspected terrorists as per the "given circumstances".

"With given circumstances in the Pakistani boat, it is clear that they were suspected terrorists," he told reporters here.

Singh was replying to questions about the four people on board a boat, which "exploded" and sank in the Arabian Sea in the intervening night of December 31 and January one during an Indian Coast Guard operation.

He, however, did not elaborate on the "circumstances which he was referring to.

The Home Minister's remarks came as questions were being raised on the veracity of claims that a 2008 Mumbai attack-style operation had been foiled. There are also reports claiming that the boat was involved in smuggling.

Defence Minister Manohar Parrikar had earlier said that "circumstantial evidence" indicated that the occupants of the vessel were "suspected or possible terrorists" and that they were in touch with Pakistani maritime officials and army.

Asked about a letter written by Punjab Chief Minister Parkash Singh Badal to his five counterparts seeking premature release of 13 convicted terrorists, the Home Minister said he would discuss the issue with Badal.

In his letter to Chief Ministers of Uttar Pradesh, West Bengal, Karnataka, Rajasthan and Gujarat, Badal sought premature release of the terrorists, including those who were convicted for assassination of former Punjab Chief Minister Beant Singh.

Similar letters were also sent to the Lieutenant Governor of Delhi and Administrator of Chandigarh.