No Wrong in Maoists Extorting Levy From Contractors: Manjhi 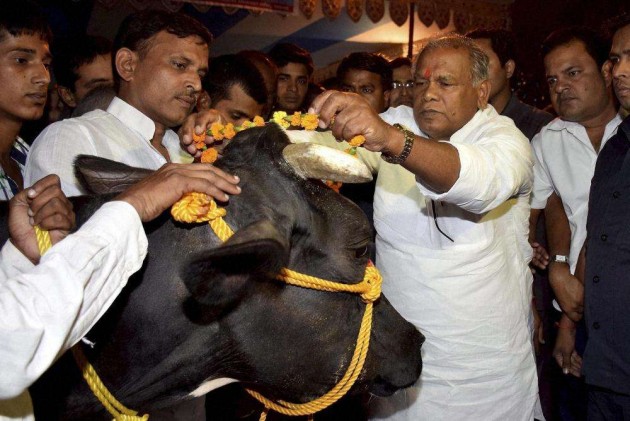 Print
A
A
A
increase text size
Outlook January 05, 2015 17:20 IST No Wrong in Maoists Extorting Levy From Contractors: Manjhi

In yet another controversial remark, Bihar Chief Minister Jitan Ram Manjhi today sought to justify Maoists extorting levy from contractors who, he suggested, were indulging in corruption and looting the state.

"I do not see any wrong in what they (Maoists) are doing by collecting levy from contractors engaged in building roads, community buildings and other government works," Manjhi told reporters after "Janata ke Darbar me Mukhya Mantri" weekly programme at his residence.

Manjhi was speaking to the media after his public interaction programme during which a shoe was flung at him today by a youth but missed its mark and fell at his side.

"Are Maoists foreigners?... People who have turned Maoists also belong to our society and they could be won back to mainstream not by brandishing guns but by development," Manjhi, who was flanked by several ministers, told reporters.

Asked if he would invite Maoists for talks, he said, "Why not? Many CMs and even leaders like Loknayak Jayprakash Narayan met them and exhorted them to shun guns and return to the mainstream of society."

He answered in the negative when asked if his assertions would demoralise security forces fighting the rebels.

Manjhi said about three years ago when he was a minister in the erstwhile Nitish Kumar Cabinet, some people claiming to be Maoists had met him to justify their demanding 'levy' from contractors.

"They (Maoists) told me that contractors, in nexus with engineers, deliberately give a higher cost of a project besides doing a low quality job.

"They said if a work is actually worth Rs 3-4 lakh an estimate of around Rs 11 lakh is given so that a profit of almost Rs 7-8 lakh is made out of the low quality work," Manjhi said.

"I did not see anything wrong in Maoists taking Rs 1 lakh from the contractors which still left them with a profit of about Rs 6 lakh," he said.

Asked about his comment yesterday at Munger that ministers do not listen to him, the chief minister blamed the media for twisting facts.

"I had said differences crop up on issues during Cabinet meetings but my decision prevails at the end," he added.