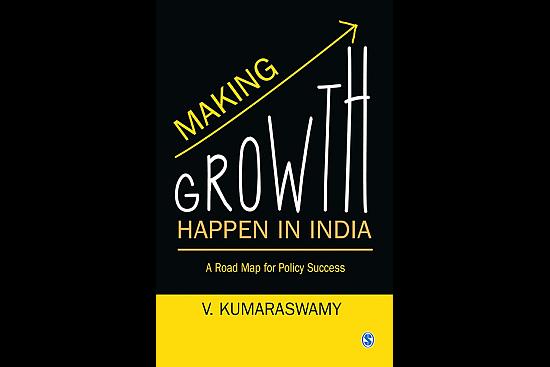 Has MNREGA been able to achieve the desired results? Why do we still see dropouts at various stages of education? Are out tax rates too high?

A new book Making Growth Happen in India: A Road Map for Policy Success by V Kumaraswamy seeks to answers these questions and several others while suggesting that for a successful economic reforms policy, the government's programmes should be firmly anchored in the reality of the social and micro-institutional context.

The book, brought out by Sage Publications, is more about design of programmes and delivery thereof and less about the macroeconomic policies and strategies. It has two parts – the first looks at the current reform programmes and their effectiveness while the second is about an alternative growth plan.

Kumaraswamy, CFO and Head of Strategy in JK Paper, suggests that if corruption has to disappear, it is essential for the government to adopt a pricing based on the value created for the consumers.

On monetary policies, he says that these can have effect in well-functioning markets where the investment decisions by businesses and personal financial decisions are impacted by the cost and availability of credit from banks.

The book starts with re-examining some of the more crucial mistaken assumptions that our reforms seem to be based on. Besides operation of MNREGA and RTE, topics like misdirected attempts at inflation control for the last three years, flaws in land acquisition laws, false logic behind many subsidies, disinvestment, Competition Commission, and minimum support prices are also analysed.

According to the author, MNREGA is like giving excessive grace marks to a student who keeps failing his examinations repeatedly.

"It might provide short-term succour, but in the long term, they tend to damage the system as well as stymie individual growth and eagerness to work," he says.

"By making MNREGA a quid pro quo for specific targets in its social interventions at individual levels, the government can reach better implementation efficiencies," he suggests.

On education, Kumaraswamy says that the government's "keenness in imparting education far exceeds the enthusiasm of the beneficiaries – a situation very closely resembling population control measures".

He also feels that India should aim at 'governance optimality' instead of seeking 'tax optimality'.

"Steep cuts in taxes along with higher tax collection targets to officials only result in needless aggression by tax officials in pursuit of honest tax payers more vigorously. The end result is indulging in frivolous cases, needless witch hunts, and unjustified demands from time to time for making payments to meet targets," he says.

"Making Growth Happen in India" is a bottom-up programme based approach (instead of top-down policy based approach) to making 12 per cent growth rates potentially possible.

To break out of 8 or 9 per cent growth rates, the author says we need more appropriate skill sets, development of proper attitudinal infrastructure, increased capital productivity, a more optimal savings rate and deliberate creation of socially productive market structures in several areas such as healthcare, public distribution and higher education.

The book suggests several unconventional growth engines which can potentially deliver both and make 12 per cent growth rates realistically possible.

"Employment is the best way to deliver growth to the vast multitude and reconcile the growth fixation of reformists and socialistic obsession with distribution," it says.