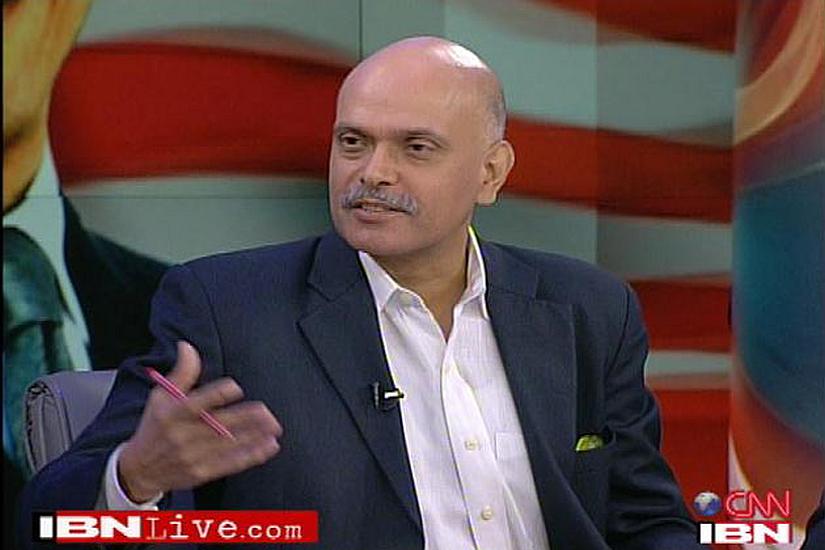 TV18 founder Raghav Bahl has announced that he, along with his wife and director Ritu Kapur has "effectively ended" his "entrepreneurial leadership of N18 by agreeing to exit" their shareholding in the company.

He added that he would be around to ensure a smooth transition from the Network18 group.

In the biggest ever deal in the Indian media sector announced yesterday, Reliance Industries Ltd (RIL) has acquired control in Network18 Media & Investments Ltd, including its subsidiary TV18 Broadcast Ltd, for Rs 4,000 crore.

The Board of RIL had yesterday approved funding of up to Rs 4,000 crore to Independent Media Trust (IMT), of which RIL is the sole beneficiary, for acquisition of control in Network18 Media & Investments Ltd (NW18), including its subsidiary TV18 Broadcast Ltd (TV18).

The funding includes open offers to be made consequent to the acquisition.

The deal goes back to 2011 when Network18 had a consolidated debt of almost Rs.1,400 crore on its books and had turned to Reliance for help.

In a very opaque deal, RIL had invested in the form of zero coupon optionally convertible debentures in Network18’s promoter group companies.

Competition Commission of India ordered that these debentures could be converted into shares at any time within a 10-year period, which would result in ownership of over 99.9% by RIL in these entities.

The move had then resulted in the then group CEO Haresh Chawla quitting as he had instead suggested divesting of stake in the entertainment business to Viacom.

In January 2012, Network18 Group and Reliance Industries joined hands for a multi-layered deal, under which the Mukesh Ambani-led corporate giant would sell part of its interest in ETV channels and would get access to content and distribution assets of the electronic media group.

"IMT would use the funds to acquire control over NW18 and TV18 resulting in ownership of about 78 per cent in NW18 and 9 per cent in TV18 and to acquire shares tendered in the open offers," yesterday's  RIL statement added.

Network18 Group CEO B Sai Kumar, COO Ajay Chacko and R.D.S Bawa, the CFO have moved on from the company in quick succession in the last few days preceding the announcement.

There have been persistent rumours that the top editors of CNN-IBN, Rajdeep Sardesai and Sagarika Ghose, who hold minority shares in the company, are likely to resign by the end of next month.

Following is the full text of Mr Bahl's letter formally announcing the decision to his colleagues:

Yesterday, Ritu [his wife and director Ritu Kapur] and I effectively ended our entrepreneurial leadership of N18 by agreeing to exit our shareholding (although I would be around to ensure a smooth transition).

We are also delighted to welcome Mr Mukesh Ambani and RIL as the potential owners of Network18. Believe us, the Group is in terrific hands. Mr Ambani is a visionary and truly good human being. And we have no doubt that Network18 would soar into the "cloud" under this dispensation. All of you have very good cause to be excited and optimistic about the future.

There are thousands of team-mates, both past and present, whose collective tejasvi karma has buoyed N18 to where it is today. Our heartfelt gratitude towards all of them! (We would like to make a special mention of our very own Vandana, who was the first manager-cum-driver-cum-lights"man" of TV18 in the early 90s).

Wish us well as we embark on our next quest - we are, as usual, utterly positive about the future. God bless you, and God bless Network18.

But there is no denying that the future of media freedom in India looks even bleaker than ever after Ambani’s Silvio Berlusconi-style domination of both news and entertainment content and delivery mechanisms. At the very least, such violation of the rules of the free market should be exposed to intense public scrutiny, even criticism, of the kind the deal between Comcast and Time Warner has provoked in the U.S.

But a near-total silence from politicians and the mainstream media greeted, as I've noted above, the extraordinary doubling of gas prices in India. When Reliance attempted to throttle the book about it, those columnists who had denounced Penguin for agreeing to withdraw Wendy Doniger’s "The Hindus: An Alternative History" went oddly quiet. And given the "toadification" of large parts of the Indian media, to paraphrase Salman Rushdie, it may even croak out some malicious joy as more independent-minded journalists depart what does look increasingly like a toad-breeding swamp.

I was not surprised when television channels did not cover the taking over of a large television news network by Mukesh Ambani’s Reliance Industries Limited.

Most channels -- roughly around 300 -- are owned by property dealers who can afford to spend Rs 1 crore, an average monthly expenditure, through money laundering. Every one of them wants to be the Reliance one day.

What has taken me aback is that the press has reported the deal but has preferred to keep quiet. Even though journalism has ceased to be a profession and has become an industry, I was expecting some reactions, at least from the Editors’ Guild of India. But then it is understandable when it has rejected my proposal that editors should also declare their assets public, the demand which they voice for politicians. Double standards make a mockery of the high pedestal on which the media sit.

Arunabh Saikia in the Newslaundry:

According to a highly placed source (no report is complete without journalistic jargon), Mukesh Ambani made it clear that he wanted Bahl out. According to a separate source, an extensive internal performance review of the group was carried out in March this year. The review, we are told, threw up numbers (of CNN-IBN’s market share and TAM ratings) which didn’t please Mukesh Ambani one bit. It was then that it was decided that RIL would play a more hands-on role in the day-to-day functioning of the company...

...There is conjecture that the other person Ambani wanted out initially was Rajdeep Sardesai. Another version from sources, states that Rajdeep’s head was never supposed to roll and it still will not. He will be back to take over the role and responsibility of Editor-in-Chief of CNN-IBN. This is reportedly because, Ambani believes, the credibility of the group would dip if Rajdeep left too.

While Scroll carried a story on the takeover, headlined “Rajdeep and Sagarika to resign as Reliance takes over Network 18”, it is unlikely that things would be as simple as that. According to a source working in a senior managerial position in the group, Rajdeep is not too keen on leaving.

Vivian Fernandes in the Hoot: Raghav Bahl: felled by his own philosophy?

Manoj Modi, a confidante of Mukesh Ambani, has apparently assured Rajdeep Sardesai, CNN-IBN’s editor-in-chief, that he will have a free hand. Sceptics will say these are feel-good platitudes that are uttered in the afterglow of a successful hunt. There is the danger of editorial freedom being whittled down in homeopathic doses. If Rajdeep stays on he will also have to fight the perception that independent journalism and the Ambanis do not go together.

(The author has subsequently sent the following: " While the conversation did happen, I would like to clarify that Modi urging Rajdeep to carry on does not suggest a guarantee of editorial freedom.”)

About the experiences of the very same Vivian Fernandes, it should be recalled, Rahul Bhatia had reported in the Caravan had reported thus:

Over the years, as the balance Bahl was required to maintain between his twin roles as businessman and journalist shifted, the chances that his reporters would face the “occupational hazard” of outside influence began to increase. As a result, journalists found themselves in uncomfortable situations. Last year, Vivian Fernandes, who co-wrote Bahl’s book, was dispatched to Gujarat to interview the chief minister, Narendra Modi. A person involved with the production of the interview recalled that Fernandes asked Modi a difficult question about water conservation in Gujarat. Modi’s organisers had asked to see the questions before the interview, and demanded the water conservation question’s removal. When Fernandes sprung it on him anyway, Modi broke away from the camera and glared at a public relations executive in the room. “Why is he talking like this?” the person recalled Modi saying. “Are we not paying for this interview?” The production crew realised that the interview was part of a promotion for Modi. When Bahl heard about the curtailed interview, he reportedly told Fernandes, “We should have a clear line between marketing and editorial.”

The line, I discovered, was crossed cavalierly some weeks ago. In late October, a finished story on Micromax scheduled for a Forbes India issue was suddenly held back for the future—a decision that threw the editorial department.

While speculation rages on about the happenings at CNN-IBN, trust Vinod Mehta to ask the unaskable on live television and even manage to elicit a response. In the middle of a programme on black money, he asked Rajdeep:

VM: Rajdeep, can I raise a point which is as important as black money, if you don't mind?

VM: I believe you are going for a holiday for two weeks, two months. Don't stay away too long. CNN-IBN needs you.

VM: Don't stay away too long

Mr Soz: A good man can't be kept down for too long, eh?

RS: We don't know what the future holds. At the moment I am going on a holiday, please allow me to go on a holiday after a long election season.  Surely I am entitled to that...

Prashant Jha reports in the HT: Rajdeep, Sagarika to go on leave from Tue, question mark hangs over their return

Less than a week after Reliance Industries Limited took over Network 18 group, IBN News Network editor-in-chief and one of Indian television's most prominent faces, Rajdeep Sardesai, will go on long leave from Tuesday.

His wife and deputy editor at CNN- IBN Sagarika Ghose too will go on leave. There is a question mark over whether they will return.

...It is learnt that news operations will be led by managing editor Vinay Tewari and news director Radhakrishnan Nair

Sunday round-up: From our Dec '13 media issue, @rahulabhatia on how Reliance began its takeover of Network18 http://t.co/RxGvwExzNw

@Raghav_Bahl a visionary leader who built a great network. And gave the freedom to journalists to stay true to the profession.

For all those asking, the show goes on at CNNIBN. We humble hacks continue to bring out the daily news, without fear or favour!

The HT too added some grist to the already-hyper rumour mill: RIL to acquire control of Network 18, Rajdeep may go

CNN-IBN editor-in-chief Rajdeep Sardesai will proceed on long leave shortly. The buzz in the Network 18 group is that he may not return.  A high-profile TV anchor with a prominent media house is believed to be in discussions with Network 18 to join but the negotiations are stuck over the anchor’s demand for a stake in Network 18, sources in knowledge of the developments said.

This same high profile anchor is also holding parallel talks with a leading Hindi channel to head its proposed English news channel. He has reportedly been offered a sizeable stake in the proposed venture.

Earlier, in a detailed story for the Mint, Ashish K. Mishra, Vidhi Choudhary and Mobis Philipose provided some details: Exits galore as RIL takes over Network18:

Alok Agrawal, the former CEO at Zee News, is likely to head the new team at Network18, according to this person. Agarwal, who joined RIL earlier this month, could not be reached for a comment. Meanwhile, Avinash Kaul, former CEO at Times Television Network, has been appointed as the new head for IBN Network and will manage three news channels—CNN-IBN, IBN7 and IBN Lokmat.