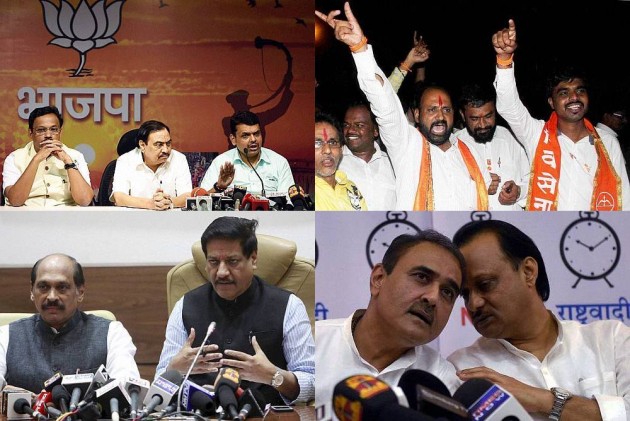 Long-standing political formations in Maharashtra crumbled today with BJP snapping its 25-year-old alliance with the Shiv Sena and NCP parting ways with the Congress and pulling out of the government, making it a minority administration.

BJP announced the break-up with Sena as seat-sharing talks collapsed over the latter's refusal to sacrifice seats for smaller allies and reported insistence of party president Uddhav Thackeray on chief ministership.

First came the split in the saffron alliance, forged by Sena founder Bal Thackeray and BJP leaders Pramod Mahajan and Gopinath Munde, which had stood the test of time, as seat-sharing talks broke down after seemingly endless rounds of parleys.

Then it was the turn for NCP, Congress' oldest ally in UPA, to break their 15-year association, citing neglect by Chief Minister Prithviraj Chavan, and deciding to withdraw from the government.

The messy break up between ideologically compatible pro-Hindutva allies came after days of hectic parleys on seat-sharing between the leaders of the two parties and their smaller allies, often marked by tough posturing, while the separation between Congress and NCP followed protracted frosty vibes from the two sides.

The developments have dramatically altered the political landscape in Maharashtra, which had become used to two blocs - Sena-BJP and Congress-NCP - dominating the scene.

"The Shiv Sena-BJP alliance, which lasted over 25 years, has ended," senior state BJP leader and Leader of Opposition in the Assembly Eknath Khadse said announcing the decision.

State BJP President Devendra Fadnavis said the decision to part ways with the Sena was "unfortunate" and "taken with a heavy heart."

The Sena is the second constituent (after Haryana Janhit Congress) to be out of the BJP-led NDA after Narendra Modi became Prime Minister and his close aide Amit Shah BJP president.

"There was so litle time to file papers and our talks with Sena weren't progressing. All proposals which came from Sena during the last 20-22 days of talks centred only on a specific number of seats and the issue of Chief Ministership," said Khadse.

Fadnavis accused the Sena of not being "flexible" on the issue of seat-sharing. "Today, they came with another proposal but said the discussion cannot progress beyond a certain number," he said without giving details.

It was learnt that Sena was not prepared to whittle down its share of 151 seats Uddhav had declared for the party as part of his "final" offer made a few days ago.

Fadnavis and Khadse said BJP will contest the elections with smaller allies like Swabhimani Shetkari Sanghatana and Rashtriya Samaj Paksh.

"We have finalised seat-sharing with RSP and SSS. We have almost done the same with Shiv Sangram," Fadnavis said.

Rashtriya Samaj Party (RSP), Swabhimani Shetkari Sanghatana (SSS) and Shiv Sangram, led by Maratha leader Vinayak Mete, are all part of the alliance and have pockets of influence in certain parts of Maharashtra.

Keeping a window open for Shiv Sena in the post-poll scenario, the BJP leaders said they would not criticise it during the campaign and remain "friends".

However, soon after the split, Sena launched a fierce attack on its former ally, saying "the development is result of a tacit understanding between BJP and Sharad Pawar's NCP." "There is a secret pact between BJP and NCP. BJP's decision to end the alliance is a result of that," Sena MP Anand Adsul said.

"Very sad that state BJP chose to part ways with 25- year-old ally Shiv Sena when we sided with them even in their bure din (bad days), unconditionally," Aaditya, son of Uddhav, said reacting to the split.

As was the buzz in political and media circles, minutes after BJP split with Sena, Sharad Pawar went into a huddle with senior leaders of his party and shortly afterwards the decision to snap ties with Congress was announced.

NCP leaders, who had not had any meeting with Congress after their only round of talks on Tuesday, were apparently peeved at the senior partner going ahead and releasing their first list of candidates yesterday.

"We have decided to end the alliance," state NCP president Sunil Tatkare told reporters as he blamed Chief Minister Prithviraj Chavan for not carrying forward the talks for seat sharing.

"We always behaved like a responsible ally of Congress and even took the initiative to expedite seat sharing talks. We had demanded half of the state's 288 seats and Chief Minister's post for 2.5 years.

"However, the Congress did not respond to our proposal by either rejecting it or forwarding a counter proposal," Praful Patel, senior party leader and a confidante of NCP chief Sharad Pawar, said.

Patel said the two sides met officially for the first time for seat sharing talks on Tuesday but Chavan left for his hometown Karad yesterday without authorising anybody for negotiations. "Since yesterday, there has been no communication," he said.

Deputy Chief Minister Ajit Pawar, a bitter critic of Chavan, said NCP would pull out from the government and hand over a letter to the state Governor in this regard tomorrow.

"For the last 15 years, Congress has had the Chief Minister's post irrespective of whether they were the single largest party or not. In the recent Lok Sabha polls, we got double the seats than Congress and even in assembly constituency-wise analysis, NCP was ahead of Congress," Patel said defending the party's twin demands.

NCP had given up its claim to the Chief Minister's post after 2004 assembly polls when it had won 71 seats and Congress 69, in return for an additional cabinet berth and three positions of Ministers of State.

Reacting strongly to NCP snapping ties over its "unreasonable" demands, Chief Minister Chavan said it was for the first time that the issue of rotational chief ministership had come up during seat-sharing talks.

"This shows that more than the larger interest of the people, personal ambitions were given priority," Chavan told reporters, in a veiled reference to Deputy Chief Minister Ajit Pawar's chief ministerial ambition.

Chavan described NCP's demand for 144 seats as unreasonable and said talks cannot he held with preconditions.

"In 2009, since Congress got double the seats than NCP in the Lok Sabha polls, we got 10 additional seats for Assembly elections. Now in 2014, NCP got double seats than Congress, so we decided to give ten seats to NCP. Shouldn't the same formula be adopted in 2014 which NCP had agreed to in 2009," he asked.

He also obliquely hinted at the possibility of NCP getting close to BJP after the split.

"It is a remarkable coincidence that NCP decided to call off the alliance after BJP decided to split with Sena. Today's chain of events was swift and dramatic. All of us will have to keep a close watch on the new political combinations emerging from tomorrow," he said.