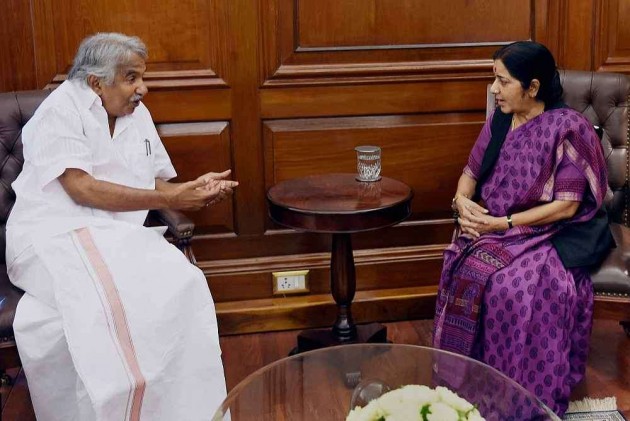 On a day of "dramatic developments", all 46 Indian women nurses were suddenly set free by Sunni militants ISIS in strife-torn Iraq and were being brought back home in a special Air India plane which left this evening for Erbil, a non-conflict zone.

"The Indian nurses who moved out against their will yesterday are free. They are in touch with the Indian Embassy officials at Erbil," the Spokesperson of the External Affairs Ministry told reporters in New Delhi. Erbil in north Iraq is the capital of Kurdistan region of the Arab Gulf country.

The nurses are expected to reach Kochi tomorrow.

The ordeal of the nurses, who were working at a hospital in Saddam Hussein's hometown of Tikrit, began when a swift ISIS (Islamic State for Iraq and Syria) offensive was launched on June 9.

The nurses were moved out yesterday against their will and were held in the militant-held city of Mosul, 250 km from Tikrit. The Erbil International airport is about 80 km from Mosul.

"The nurses are safe, unharmed," the spokesperson said, adding the special Air India flight has taken off from Delhi.

Asked if National Security Advisor Ajit Doval played any role in the negotiations to get the nurses released, he said at the diplomatic level, negotiations involved External Affairs Minister Sushma Swaraj herself but, at the ground level, the details cannot be shared.

"Diplomacy works through the front doors. We are using other doors and how those doors were used and knocked on and how they were opened up is a story for another day. The story for today is that one of those doors opened and we were able to extricate our nationals," the Spokesperson said.

He further noted that the Indian officials were "always in touch" with what was going on with the nurses and said "Things don't happen just like that. There is a lot of effort, patience and a lot of quiet work that has gone into this."

A joint-secretary level IFS officer and an IAS woman officer from Kerala are among the Indian officials travelling on the chartered flight.

At a separate press conference in Delhi, Kerala Chief Minister Oommen Chandy said the nurses have reached the border near the international airport at Erbil for their evacuation to India.

"The government of India, the embassy in Baghdad and the state government, all have worked together and finally we are achieving the objective to bring back the nurses to India," he said.

In Kochi, airport sources said Air India's special flight Boeing 777 carrying the nurses and other passengers from Erbil is expected to reach the city around 6.40 am tomorrow.

The nurses were moved in a vehicle by rebel from their hospital in Tikrit yesterday and were lodged in an old building near a hospital in Mosul, according to family members of a nurse from Kottayam.

India used all "national assets" to secure the release of the nurses from ISIS, who had forced them to move out of their hospital in Tikrit yesterday against their "free will", the MEA Spokesperson said.

However, he did not divulge the details of how India managed to secure the release and only said that there were other captives in the conflict zone and process of freeing them was "underway" and any comments at this stage may be counterproductive.

He said he will not get into the "how, when, where, what" on the release of the nurses at this stage.

He said after securing the release of the nurses, the government will "redouble" efforts to evacuate other captives in the conflict zone, which includes a batch of 39 Indian construction workers in Mosul, but did not elaborate.

"We are engaged at the ground and at diplomatic levels... At this stage, our primary goal is to ensure that they are brought back from captivity. This is a war situation.

"We do not have the capabilities that ordinarily you would have in a situation where there is no conflict. These are extremely tenuous links that we are building and anything we do to undermine them is not going to help us in the long run," he said.

The Spokesperson said, "Resources used to free these nurses will be diverted to free other Indians... We will leave no stone unturned to bring back Indians from Iraq."

He added, "We will not be satisfied until the culmination of this effort."

With 46 nurses out of the conflict zone, nearly 50 Indians are still expected to be in these zones, which include the 39 captives.

Meanwhile, nearly 1,500 Indian have registered to leave Iraq from the no-conflict zone. Already, about 1,000 Indian nationals have been given tickets to travel out of Iraq by the ministry.

There were about 10,000 Indians before the start of the serious strife between government troops and Sunni militants backed by al Qaeda.