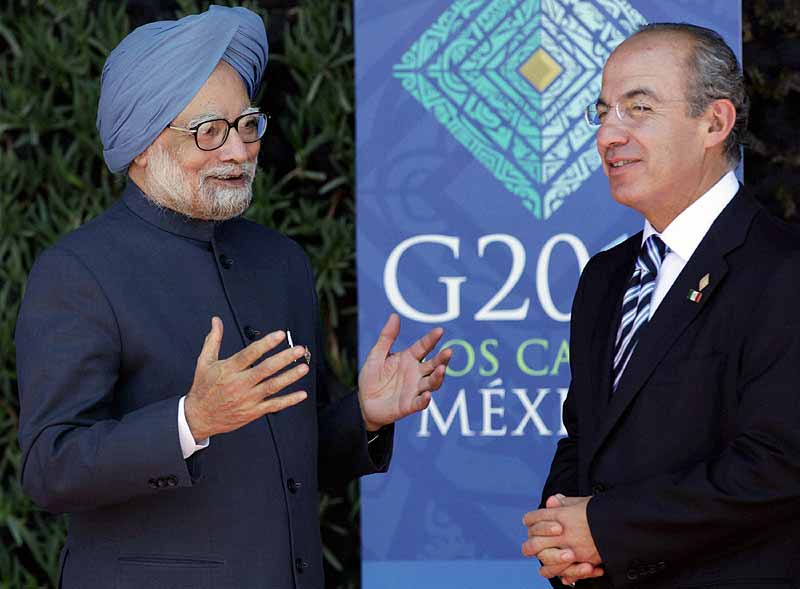 India today announced a 10 billion USD contribution to the IMF's additional 430 billion USD financial firewall to help the debt-wracked 17-nation eurozone so that the faltering world economy is protected against the spread of any financial contagion.

The announcement of the contribution was made by Prime Minister Manmohan Singh in his address at the Plenary Session of the seventh summit of the Group of developed and developing countries(G-20) in this Mexican resort town against the backdrop of growing calls to nations to increase contributions to the International Monetary Fund(IMF) for the bailout fund.

India's contribution along with pledges by other member countries of the five-nation BRICS bloc has helped increase IMF's resources and give a boost to the 430 billion USD fund being used as a firewall to support struggling eurozone economies.

"The International Monetary Fund has a critical supportive role to play in stabilising the Eurozone. All members must help the Fund to play this role, I am happy to announce that India has decided to contribute 10 billion USD to the IMF's additional firewall of 430 billion USD," he told the world leaders at the seventh summit of the grouping which accounts for 80 per cent the world's GDP.

India has previously pledged to make contributions to the bailout fund but did not disclose the exact amount of its contribution to the fund.

According to Chinese Vice Finance Minister Zhu Guangyo, the BRICS is committed to pledge 60 billion USD to boost the firewall. Besides India and China, the other countries in the bloc are Brazil, Russia and South Africa.

The IMF fund will serve to help governments that are struggling to cope with debt repayments but eurozone leaders still faced pressure from their G-20 peers to make reforms to head off future financial crisis.

Noting that developed countries have expanded the resources of the IMF enormously, largely to support programmes in rich countries, Singh said that steps are now needed to be taken to substantially expand the resource base of Multilateral Development banks so that they have the firepower to help developing countries pursue their development goals.

About countries pledging more resources to IMF, Singh said there is concern that the firewall available may not be adequate to deal with the financial contagion.

"The resources currently expected to be mobilised by Europe and the IMF are less than was estimated a year ago, and the crisis is actually more serious," he said.

The prime minister said that part of the solution lies in providing liquidity to cope with loss of market confidence. But, liquidity does not help when solvency is in question, he said.

"To address this problem, liquidity must be provided in parallel with effective adjustment programmes that ensure an early return to debt sustainability," he said.

Singh said that the adjustment programme adopted should lead to an acceleration of growth so that countries can grow out of the debt trap.

Stating that the global economic situation is deeply worrying, Singh said the economic recovery is faltering and even the fast growing emerging markets are slowing down.

Calling for policy action on several fronts, Singh said that the issue of greatest concern at present is the uncertainty affecting the Eurozone.

"The sovereign debt crisis and the banking crisis now on the horizon have grave implications for the health of the entire global economy," he said.

Singh also made a reference to a new government in Greece about to take office. "We wish them well and are encouraged by the early statements of intent, he added. Greece's far right party, which will be forming the government, has spoken about its intentions to remain in the Eurozone. (More)

However, the prime minister said the risks of contagion in Europe remained because they reflected weaknesses in the banking sector arising from excessive sovereign debt and low growth prospects.

"A crisis in the European banking system can choke trade finance quite quickly, and end up choking economic growth not just in the Eurozone but in the world in general," he said.

Singh said that the Las Cobas Summit needed to send a strong signal to the markets that the Eurozone countries will make every effort to protect the banking systems and the global community will back a credible Eurozone effort and response.

He also spoke about the contentious issue of the relationship between austerity and growth.

"It can be argued that austerity now will lay the basis for sustained growth later. But there is also an alternative view that with growth impulses as seriously weakened as they are today, synchronised austerity across many countries may not be the right medicine," he said.

Financial markets normally favour austerity, but even they are beginning to recognise that austerity with no growth will not produce a return to a sustainable debt position, the prime minister added.

Stating he is not suggesting that fiscal prudence is not important, Singh said that he is only saying that given the large adjustment needs, not all of it can be front-loaded everywhere.

"This is especially relevant within a currency area. Austerity in the debt-ridden members of the Eurozone can work only if surplus members are willing to expand to offset contraction elsewhere in the currency area," he said.