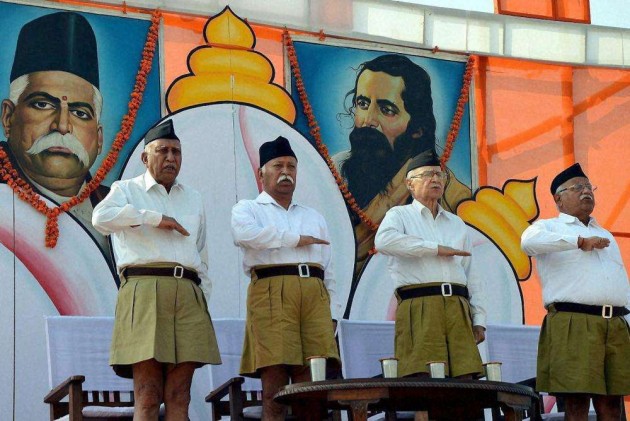 The BJP government has come under attack from an RSS affiliated workers' body which charged it with being on the "wrong track" on the economic and labour front by "unduly favouring corporate sector and indulging in criminal neglect of social sector".

In a letter to Prime Minister Narendra Modi, the Bharatiya Mazdoor Sangh (BMS) said that in a few months itself his government has "disappointed" the social sector including workers, common man, lower middle class, peasants, villagers and tribals.

It also termed the labour and economic reforms as being against the nation's interests, alleging they are all meant to "hand over national wealth to private corporate sectors".

"The Government is unduly favouring corporate sector and indulging in criminal neglect of social sector. The corridors of power are filled with American based NRI advisors and Ministers who are loyal to corporate sector. The Vice Chairman of NITI Ayog, economic advisor, RBI Governor etc are examples.

"It is to be remembered that many of them were advisors of those financial institutions in the US which collapsed during the global financial crisis. Hence, BMS is of the opinion that in the labour and economic front the government is totally on the wrong track," the BMS said quoting a resolution passed at its national executive meeting earlier this month.

Opposing economic and labour reforms initiated by the Modi regime, the BMS is all set to corner the government by participating in the country-wide Satyagraha programmes on February 26 to force it to change its stand.

The outfit also attacked the new land acquisition law, saying it takes away right of consent of owners and necessity of getting Social Impact Assessment report which are guaranteed in the 2013 Act brought by UPA.

It also attacked the 'Make in India' initiative and said its "intention is only to popularise FDI as the only panacea for all the economic ills".

The BMS also accused the government of initiating labour reforms without consulting trade unions and for keeping them away from the 'Shrameva Jayate' programme of Labour Ministry.

"The present central government came to power upon high expectations of the common man. People wanted a nationalist government and gave their votes for total change. But the present government also has within a few months disappointed the social sector including workers, common man, lower middle class, BPL people, peasants, villagers, tribals etc," it said.

The BMS alleged that handing over nation's natural resources to the hands of private exploiters is writ large in the coal law as well as land acquisition law.

"Government employees are under a threat of their retirement age being reduced to 58. Government is pushing backdoor privatisation through various terms like disinvestment, denationalisation, PPP," its resolution said.

The BMS' resolution passed at the national executive meeting, which took place in Bhopal from February 6 to 8, says it is for the "first time in the labour history of independent India that a chain of important and basic changes were being brought in labour laws without consulting the trade unions".

It said the Centre took the arbitrary Rajasthan amendments as a model and circulated it among all state governments, which are "anti-worker" and are followed by Madhya Pradesh government.

Other governments of Maharashtra, Haryana, Bihar, UP, Gujrat etc. Are also preparing to blindly imitate Rajasthan amendments and the existing benefits of workers are being gradually withdrawn everywhere, it alleged.

It said that a chain of anti-worker labour reforms has prompted BMS, the largest trade union, to protest and go to streets and the recent coal strike is a glaring example.

The BMS said Small Factories Act is an example where factories with up to 40 people are being exempted from ESI, PF and other labour laws, which means 71.2 pc of factories and 80 pc of workers will be out of coverage of labour laws.

"The safety provisions are totally diluted in Section 33(1) of Small Factories Act," it said, adding that it has been left at the discretion of employers.

"Labour law provisions for imprisonment have been dropped and replaced by small fines," the BMS said, adding it is against ILO convention C-81 which was ratified by India.