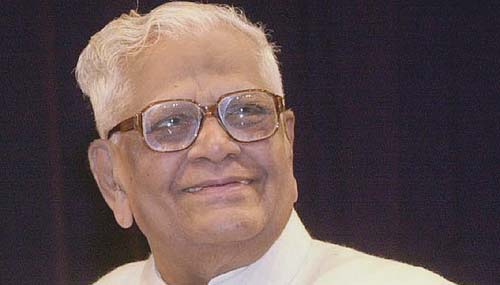 The 98-year-old former President, who was admitted to the Army Hospital (Research and Referral) on January 12 with complaints of Urosepsis (a toxic condition caused by the extravasation of urine into bodily tissues), died at 1430 hours.

"The former President passed away at around 1430 hours. His wife and son-in-law were beside him when he breathed his last," said Brigadier A K Sharma, hospital's administrative head.

Venkataraman was admitted to the hospital with complaints of delirium and dehydration.

Earlier in the day, the hospital said he was suffering from multi-organ failure and was on advanced life support systems including ventilatory support, continuous haemodialysis and drugs to keep his blood pressure normal.

A copybook president, R Venkataraman skilfully guided the country through a testing period of coalition politics in its nascent days that saw three prime ministers in two years.

Known for dignity and fairplay, Ramaswamy Venkataraman, popularly known as RV, will go down in history as the President who had the distinction of working with four prime ministers, appointing three of them--V P Singh, Chandrashekhar and P V Narasimha Rao-- during his five-year term.

He was chosen for the top post when late Rajiv Gandhi was the prime minister but some comments made by him a decade ago at the height of BJP's ascendancy in national politics earned him the wrath of Congress.

Elevated from Vice Presidency, Venkataraman succeeded Zail Singh, who had given some anxious moments to Rajiv Gandhi with reported threats of dismissing the government.

The stint of Venkataraman, the country's eighth President who held office from July 25, 1987, coincided with the period when the Indian electorate threw up a fractured mandate and politically the country was yet to accept coalition governments as a means of governance.

A lawyer by profession and an intellectual, Venkataraman, a die-hard Congressman from Tamil Nadu did have a testing time as never before the tenure of an Indian President been so eventful, thorny and also challenging.

Steeped in the Gandhi-Nehru tradition, Venkataraman had propounded the theory that the President in the Indian context was like the 'emergency light' which automatically came on when the normal flow of power was broken and went out after normal working was restored.

Venkataraman had also made a conscious suggestion for establishing a national government during a fractured verdict.

There were repeated controversies on the role of Governors, questions relating to the split and disqualification of members in Parliament even as debate surfaced from time to time on the discretionary powers of the president-- several constitutional issues that have normally eluded answers.

In fact, these thorny subjects set the stage for his biography 'My Presidential Years' published after he relinquished office.

Again, ever since out of office RV chose to make news a number of times suggesting drastic constitutional amendments and major changes in the country's political chessboard.

All these - he preferred to speak up despite the fact that Venkataraman himself has been the member of constituent assembly that drafted country's constitution.

Once at a function attended among others by the then Prime Minister Atal Bihari Vajpayee, he spoke against coalition form of government and mooted the idea that the Constitution should be framed in a manner to have two-party governance. "We should find means by which splinter parties do not enter Parliament and ruin democracy," he had said.

Another time RV suggested a national government consisting of all the parties in the Lok Sabha in order to ensure political stability. He made the first proposal in 1991 and Narasimha Rao's closer ties with BJP stalwart Atal Bihari Vajpayee only fuelled speculations for such a possibility.

He made yet another suggestion, which later looked quite relevant. He suggested constitutional amendment to provide in the Rules of Procedure of the Lok Sabha that a motion of no confidence against the ministry should in the same motion name the Prime Minister to succeed the present incumbent if the motion carries.

This system, Venkataraman had pointed out , prevails in Germany where there is a multi-party system. The suggestions sounded near prophetic in 1999 when Sonia Gandhi could not muster necessary numbers to form a government after the opposition brigade under her had brought down the downfall of Vajpayee government by just one vote.

While he made the suggestion after suggestion wanting to project himself as a "statesman former president" at the altar of nation building, there have been enough indications from people who knew him intimately that heart-in-heart RV had nurtured a dream of bagging Bharat Ratna.

In 1999, Venkataraman, who liked to be remembered as a 'copy book president', sort of embarrassed the then President K R Narayanan when in a media interview he had said Narayanan was wrong in not inviting Sonia Gandhi to form government when she claimed the majority support after the fall of Vajpayee government.

Narayanan had asked Sonia Gandhi to get letter of support from MPs which Gandhi failed to produce even after three days.

If former President Zail Singh is often ridiculed for his sycophantic comment that he would have swept the floor for his leader Indira Gandhi, it's paradoxical that Venkantaraman's comparative gesture to Rajiv Gandhi is either practically forgotten or given the camouflage of statesmanship.

Breaking all protocol, he had rushed to the Indira Gandhi International Airport to receive prime minister Rajiv Gandhi when he arrived after escaping unhurt from the attack by a Sri Lankan soldier during his visit to the island nation during the peak of IPKF operations against Tamil tigers.

Born on December 4, 1910 at Thanjavur in Tamil Nadu, Venkataraman served nearly 4 years as the 7th Vice-President. Elected in 1950, to free India's Provisional Parliament and to the First Parliament (1952-1957), RV had held various ministerial positions in the course of his political career, both in the Centre and in Tamil Nadu government.

In his own words, as the Defence Minister under Indira Gandhi in 1983, he later claimed he had personally supervised the arrangements for the nuke tests which was later cancelled by Indira Gandhi once the program was leaked out and the Government feared boycott and sanctions. RV had also served as the Union Finance Minister

In Tamil Nadu, his contribution as the state Industry Minister is said to have left salutary impact keeping the state on the fast track of industrial growth.

At the end of the day, historians will have a tough time doing the balance between RV's image of a dreamer of being a statesman or a Nehru-Gandhi loyalist.