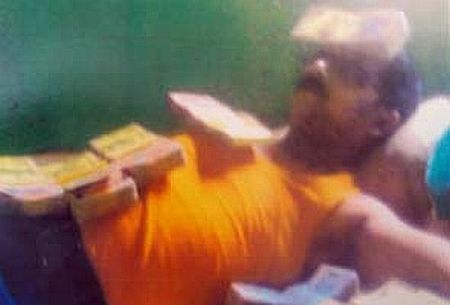 The Tripura CPI(M) leader, who was caught on camera lying on bundles of currency notes, has been expelled from the party for "immoral work" and tarnishing the image of the party.

Samar Acharjee, member of Bankumari Local Committee, was expelled from the party for immoral work, tarnishing the image of the party and earning money by illegal means, Subrata Chakraborty, Secretary of Dukli Divisional Committee said.

The decision to expel Acharjee from the party was taken following deliberations of the Dukli Divisional Committee last evening, he said.

Acharjee, a contractor by profession, was shown lying on bundles of currency notes on television footage last Thursday.

Acharjee was heard in the footage saying, "I have withdrawn Rs 20 lakh from my bank account and fulfilled my long-cherished dream of sleeping on a bed of money."

The CPI(M) leader said in the footage, "I am not a hypocrite like other party members who depict themselves as proletariat, yet have a huge amount of money."

Chakraborty said the matter came to the notice of the party on October 10 last and the divisional committee served him a notice to explain reasons for doing such an act, but his replies were not satisfactory.