Violence Over Alleged Sexual Assault of Minor Girl in School 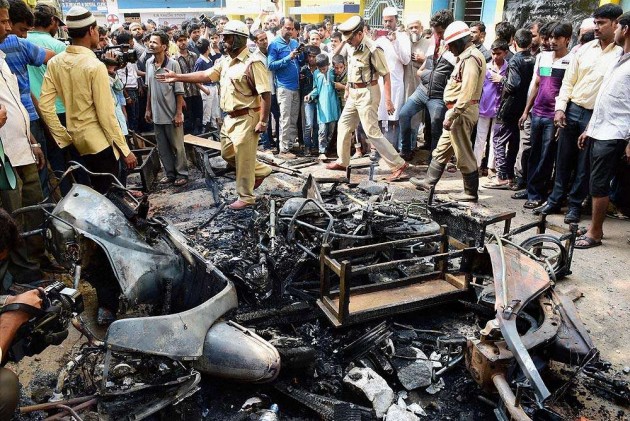 Print
A
A
A
increase text size
Outlook January 07, 2015 16:38 IST Violence Over Alleged Sexual Assault of Minor Girl in School

Violence erupted today over alleged sexual asssault of a minor girl here by a school teacher, as angry protesters demanded he be handed over to them and given "instant justice", leading to police laticharge and bursting of teargas shells.

Converging outside a school, the protesters turned violent, throwing stones and torching a bike and manhandled the teacher as police moved him from the locality, police said. Some policemen were injured in the violence.

The teacher was arrested and booked under Protection of Children against Sexual Offences Act and section 376 of the Criminal Procedure Code (punishment for rape), a top police officer said.

As tension escalated, Bengaluru Police Commissioner M N Reddi rushed to the spot to bring the situation under control.

Reddi said the teacher is alleged to have sexually assaulted the girl in the school and parents and other locals gathered in large numbers, demanding "justice should be instantly given to that particular person."

He said police force led by Additional Commissioner Alok Kumar stood firm that they will not allow such instant justice method and told the crowd that the police would investigate and produce the accused before the court which alone has the authority to impose any penalty.

But "some unruly elements" of the local area did not pay heed despite attempts to convince them over microphone not to disturb peace.

As there was some stone throwing and bottles were hurled injuring policemen, "We had to use teargas and lathi-charge to disperse the crowd," Reddy said.

In a disconcerting trend, as many as five incidents of alleged sexual assaults of minor girls in schools were reported in Bengaluru in as many months till December, which have led to growing public outrage and concern over safety of girls.

The series of incidents led police to come out with safety guidelines for schools, which in many cases have been found to be not observing them.