A Plastic Surgeon Must Have Fixed an Elephant's Head on Ganesha: PM 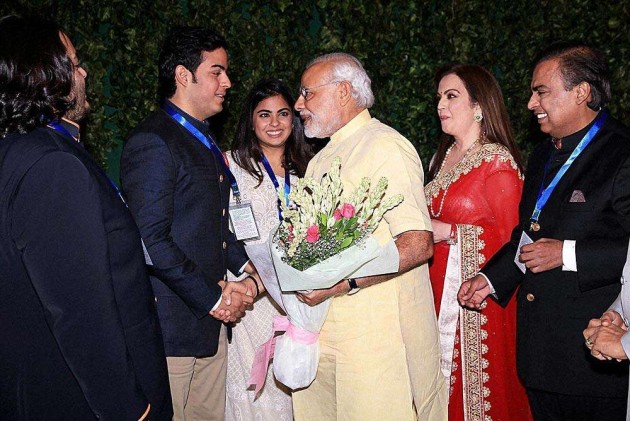 Print
A
A
A
increase text size
Outlook October 25, 2014 19:20 IST A Plastic Surgeon Must Have Fixed an Elephant's Head on Ganesha: PM

Describing neonatal and maternal mortality rates as a matter of grave concern, Prime Minister Narendra Modi today said his government wanted to effectively use its 'Make in India' and 'Digital India' campaigns to reach healthcare to the country's poorest of the poor.

Stressing upon cleanliness and hygiene, he said preventive care was the most important component of overall healthcare and also inexpensive.

"It is embarrassing to compare healthcare facilities in our country with those available abroad. Neonatal mortality is a matter of grave concern and so is maternal mortality.

"When a child falls into a borewell, families sit in front of TVs and the media gives a running commentary as gloom prevails everywhere, but we are hardly aware that hundreds of children die soon after being born. Many times, the mother and child both die for want of primary healthcare," he said after inaugurating the refurbished and partly newly built H N Reliance Foundation Hospital.

"Today, when diagnostic machines have replaced the doctor's expertise to a large extent, I want companies to come to India and manufacture expensive equipment needed for medical treatment, I want FDI to come into the sector.

"If hospitals like this are part of the network providing medical advice through telemedicine, quality healthcare can reach people living in remote areas for which Digital India can come in handy. I want the Digital India initiative to be effectively used for improving medicare and education," he said.

Modi, who is pursuing his 'Clean India' campaign with great zeal, underscored the importance of hygiene and preventive care to stay healthy.

"Preventive care is the most important component of healthcare. Getting treatment for a disease is expensive, staying healthy is inexpensive. If people get clean drinking water, they will not be afflicted by a number of diseases," he said.

Recalling how as Chief Minister of Gujarat he had developed the Sabarmati riverfront by rejuvenating the parched river with water from Narmada, he said, it helped tackle drinking water problem in Ahmedabad city.

"Water table rose and people started getting pure drinking water. Earlier, the poor of the city thronged hospitals due to poor quality of drinking water, but now, in the last 10 years, there has been no epidemic in Ahmedabad," he said.

Referring to a survey, the Prime Minister said the cause of untimely death of 40 per cent of the children in Pakistan was because they did not wash their hands before eating.

"We are no different, we share the same legacy," he said and lauded Madhya Pradesh government's initiative when lakhs of school children created a new world record by collectively washing their hands on Global Handwashing Day.

"Time has come for the country to start from here," he said.

The Prime Minister referred to his address to UN General Assembly in which he had pitched for observation of International Yoga Day and said holistic healthcare was the need of the present times.

"Today, the atmosphere is in favour of holistic healthcare...For transformation from stressful life to stress free life. It's time we start respecting life," he said.

In ancient times, the Prime Minister said, India had marked new frontiers in the field of science.

"Mahabharata says Karna was not born out of his mother's womb. This means people then were aware of genetic science. There must have been a plastic surgeon who fixed an elephant's head on Ganesha," he said, adding what mathematician Aryabhata said centuries ago, world has accepted now.

Modi said like the "kayakalp" (renewal) of the 98-year-old hospital by the Reliance Foundation, it was possible to "renew and transform" the nation.

"A true leader works with the intention of wiping the tears of the poor," he said, adding "the path of health assurance is more difficult than that of health insurance, but achievable".

The 90-year-old hospital will offer affordable modern healthcare to the masses and will focus on respect for life, Reliance Foundation Chairperson Nita Ambani said.

The hospital has partnerships with world-class institutions of Johns Hopkins, the MD Anderson Cancer Centre, Massachusetts General Hospital and the University of Southern California for a two-way exchange of doctors, knowledge transfer, nurses' training, globally acclaimed doctors as visiting faculty and access to latest technology, she said.

According to her, the thrust areas of the hospital include specialisations in oncology, cardiac science, neuroscience, urology, GI science, mother & child and orthopaedics and joint replacement.

"We have been able to attract the best professional talent not only from the country, but from across the globe. We have over 50 doctors and surgeons, who have joined us from the US, Britain, Australia etc," she said.

Company Chairman Mukesh Ambani said his group vows that the hospital will serve the poor and the underprivileged, and will strive hard to make the hospital top class.

Some of the latest equipment that hospital has includes the SPET-CT, which is a first-of-its kind machine in Asia, the PET-CT, which a first in Mumbai, a hybrid cath lab, nuclear medicine and radiation to ensure quick access of vital diagnostics, five modular and integrated operation theaters including robotic surgery, dedicated patient lifts, designed to carry beds, digital records of patients stored on cloud; and RIFD technology to keep track of patients and equipment in the hospital, among others.