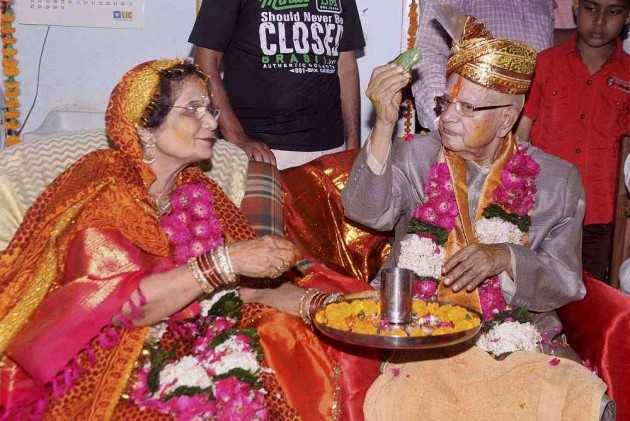 Veteran Congress leader N D Tiwari has married Ujjwala Sharma, mother of his biological son Rohit Shekhar with whom he was involved in a six-year-old legal battle.

67-year-old Sharma said the marriage was conducted in a traditional way.

"He wanted to give social sanctity to our relationship, which was very old and we have a 35-year-old son. We will complete legal formalities after which we will invite all," she told reporters.

Tiwari, the former Chief Minister of Uttar Pradesh, was involved in a lengthy legal battle with Sharma, a retired teacher, to accept Shekhar as his biological son.

Sharma had earlier this month staged a protest outside Tiwari's residence. Later, she was allowed entry in Tiwari's house here and had been staying with him since then.

The Delhi High Court had on April 22 held that Tiwari was the biological father of Rohit. Ahead of the court verdict, Tiwari had accepted that Rohit was his son.

Rohit had in 2007 filed the paternity suit claiming the veteran Congress leader and Sharma be declared as his biological parents.

Besides serving as chief minister of UP thrice and Uttarakhand once, Tiwari served as Governor of Andhra Pradesh between 2007 to 2009, when his name figured in a sex scandal and he had to resign .