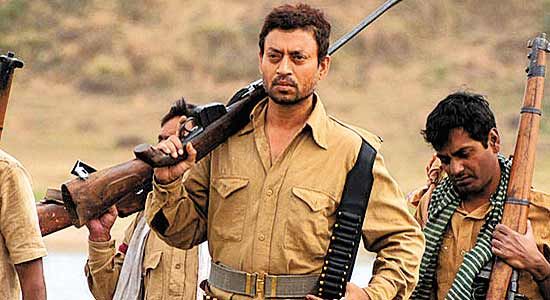 Irrfan was chosen for his intense portrayal of the steeplechase player Paan Singh Tomar. A seven-time national champion in the '50s and '60s, Tomar, who served in the Indian army, turned a bandit after a land feud in his family. He was killed in 1981.

Gokhale, who has acted in many Hindi films as well, was honoured for his poignant depiction of a man struggling to save his dying wife in Marathi film Anumati.

Usha Jadhav was adjudged the best actress portrayal of a rustic housewife in Marathi film Dhag while its filmmaker Shivaji Lotan Patil was declared the best director. The film depicts the struggle of a family, who take care of their village crematorium.

A beaming Irrfan, 46, dedicated his award to the athlete and his family. "I am happy that Paan Singh Tomar, who was unknown, became a household name through this film. I share this award with his family. I hope that the film helps people realise that talent should not go to waste," Irrfan told PTI.

Bollywood shared the spotlight with Malayalam and Marathi films with the jury recognising wide variety of movies from different regional cinema industries. Though not in the main categories, Malayalam films bagged 13 awards to emerge at the top.

Headed by veteran filmmaker Basu Chatterjee, the 11-member feature films jury announced the awards today. The National Film Awards along with Dada Saheb Phalke honour, to be declared later, are likely to be given by President Pranab Mukherjee on May 3, officials said.

Kahaani, about a pregnant woman's quest for her missing husband in Kolkata, won Namrata Rao the best editing honour.

Malayalam film Spirit, which deals with the topic of alcoholism, was named as the best film on social issues.

Another Malayalam film Black Forest was declared the best film on environment conservation/preservation.

Bollywood dominated in the special jury award with Aamir Khan starrer Talaash, Gangs of Wasseypur, Kahaani and Dekh Indian Circus being named in the category with Bengali film Chitrangada.

The others in this category were: Investment (Marathi), Nabar (Punjabi), Vazakkuenn 18/9 (Tamil), Eega (Telugu), Harud (Urdu), Lessons in Forgetting (English) and Ko:Yad.