6 Yards of Glamour: Deepika Flaunts a Sari at Cannes 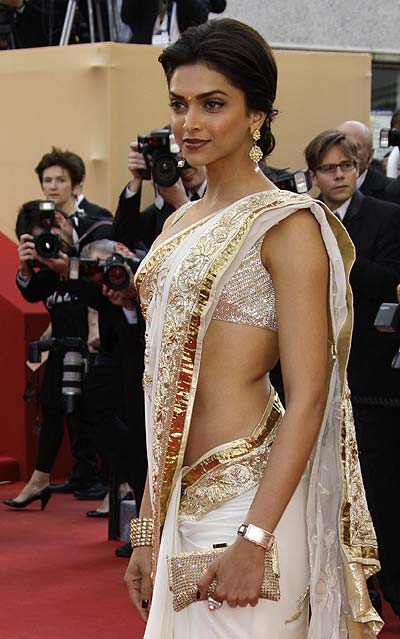 outlookindia.com
-0001-11-30T00:00:00+0553
Cannes has been getting ample doses of Bollywood glamour courtesy Aishwarya Rai and Mallika Sherawat, but it was Deepika Padukone who flew the flag for India high today on the French Riviera, looking glamorous in a sari.

While both Aishwarya and Mallika opted for Western couture, the 24-year-old took the six yard route to style as she stepped out on the red carpet in a Rohit Bal sari.

She teamed the cream and gold confection with Kundan jewelery, a stone studded clutch and added a quirky touch with a chunky watch.

The former model's traditional attire was complimented by a sparkly bindi and a neat bun, which left the 'RK' tattoo on her neck visible.

Deepika who is at the prestigious film festival as the brand ambassador of Chivas Regal, attended Mathieu Amalric's French movie, Tournee along with Bal.

"When one is representing India in a very visible platform like the Cannes, gowns and elaborate western dresses do not really represent India. One should not only feel Indian, but also look Indian," the designer said.

The criticism seems to be levelled at Aishwarya, who always opts for Western designers for her stint at the film festival.

The 36-year-old wore a violet tulle and mousseline gown from Elie Saab for the festival opening, but her ensemble did not win her any brownie points as her pompadour updo was criticised as "matronly".

For her second outing on the red carpet with fellow L'Oreal spokesmodel Eva Longoria, Aishwarya opted for a black Armani Prive strapless number, which hugged her curves.

Meanwhile Mallika who likes to shock with her fashion choices, has kept a low profile this year.

She had opted for a simple white dress for the opening and wore a red gown for an after-party.

She had grabbed headlines with her first appearance at Cannes, when she opted for a plunging golden blouse paired with a slashed skirt as she posed with Jackie Chan for the photocall of their film The Myth.

Her fashion choices again caused a stir when she turned up at the premiere of Inglorious Basterds in Los Angeles wearing a sheer black gown with her underwear visible.

Actress Nandita Das who was a part of the Cannes jury in 2003 had won praise for wearing Indian ensembles at the festival including a silk sari, which she said had been a part of her wardrobe for years.

The sari has moved on from being a daily Indian staple to an international style statement.

Sugababes, the popular girl band sported sarees and bindis in their latest avatar as Indian brides.

The musical trio of Amelle Barabah, Heidi Range and Jade Ewen got an Indian make-over for the cover of Asian Woman magazine, reported Sun online.

Liz Hurley, Victoria Beckham and Ashley Judd are some other Hollywood beauties who have worn the Indian ensemble.