50% Reservation for Women in Panchayats Approved 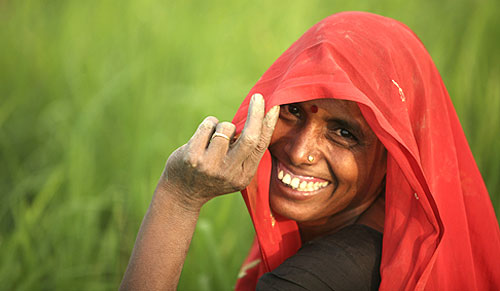 outlookindia.com
-0001-11-30T00:00:00+0553
In a path-breaking move to empower women at the grassroots level, government today approved a proposal to increase reservation for them in panchayats to 50 per cent.

A meeting of the Union Cabinet, chaired by Prime Minister Manmohan Singh, decided to bring a bill to amend Article 243(D) of the Constitution to enhance reservation for women in panchayats at all tiers from the current one-third to at least 50 per cent.

"This is a path-breaking decision," Information and Broadcasting Minister Ambika Soni told reporters.

She said the Panchayati Raj Ministry is likely to move a bill to amend the constitution in the next session of Parliament to give effect to the increased quota.

"Enhancing reservation for women in panchayats will facilitate more women to enter public sphere. This would lead to further empowerment of women and make panchayats more inclusive institutions, improve governance and public service delivery," Soni said, adding there was no financial implications in operationalising the proposal.

At present, out of the total elected representatives of panchayats numbering approximately 28.1 lakhs, 36.87 per cent are women.

With the proposed constitutional amendment, the number of elected women representatives is expected to rise to more than 14 lakhs.

The amendment would cover all states and union territories except Nagaland, Meghalaya, Mizoram, tribal areas of Assam, Tripura and hill areas of Manipur.

President Pratibha Patil, in her address to the joint sitting of Parliament on June 4, had said a Constitutional amendment would be brought to provide 50 per cent quota for women in panchayats.

Soni said the proposal to have 50 per cent quota for women in urban local bodies is likely to be taken up separately later.

States like Bihar, Uttarakhand, Himachal Pradesh and Madhya Pradesh have already implemented 50 per cent quota for women in the panchayati raj institutions.

While Rajasthan has announced implementation of the proposal from the next panchayat election in 2010, Kerala has declared that it would implement it.

'Reservation in PRIs is Historic'

Terming the reservation as "historic", Union Minister for Rural Development C P Joshi said the government fulfilled it's promise and will further stand by it.

"Government of India has taken a historical decision today by approving the proposal to increase reservation for women to 50 per cent in Panchayati Raj Institutions (PRI)...We fulfilled our promise. We will stand by it," Joshi told reporters here.

Union Cabinet passed the proposal for moving a Constitutional Bill for enhancing reservation for women in PRIs "at all tiers" from one third to 50 per cent, he said.

He said President Pratibha Patil's announcement of the 100-days agenda of the government in June had mentioned the intent to provide fifty percent reservation for women in Panchayats.

"We have done it and will move the Bill for amendment in Parliament," Joshi said.

CPI(M) politburo member Brinda Karat said, "this reservation is there in several states. Kerala Assembly is convening a special session soon to pass such a law.

"Providing reservation for women in panchayats is under the jurisdiction of states and so many states have exercised their rights to give such reservation".

She said what "we want the Central Government to do is to take action for ensuring reservation for women in Parliament and state assemblies, an action which only they can take as it is in their jurisdiction".

"The generosity and sensitivity which they (Centre) have shown by giving 50 per cent reservation is lacking in their resolve as far as quota in Parliament and State Assemblies is concerned," she added.

CPI's Annie Raja said, "I welcome this move by the Centre but we expect that the government should not stop here. This step should not be an eyewash or a step to pacify women groups which are fighting for women's reservation in Parliament and State Assemblies".

"Only a few days are left for the deadline to fulfill for the new government's 100-day agenda which has women's reservation in it and we don't want the government to go back on this," she said.

Bihar Chief Minister Nitish Kumar said the state had virtually taken a lead on the issue by introducing quota for them long back.

"Soon after the NDA came to power, we decided to increase the reservation for women to 50 per cent in the Panchayati Raj institutions in Bihar," Kumar told reporters.

"Bihar has virtually taken lead on the issue," Kumar said and added that it was an effective step towards empowerment of women.

"For me it is a day of happiness as the women across the country will be able to enjoy the facility," he said.