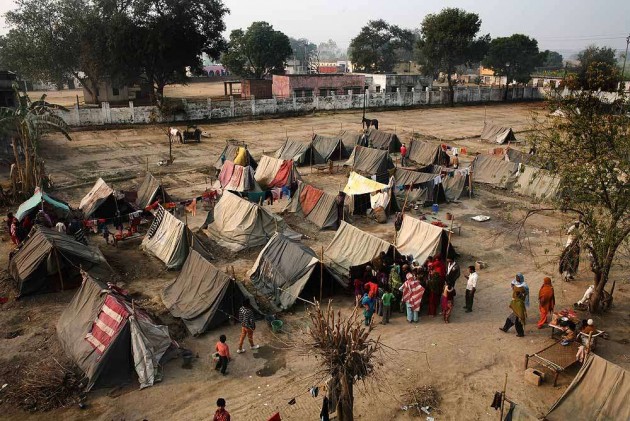 Contradicting Mulayam Singh Yadav's claim, a high-level official panel today said a total of 4,783 "displaced" people were still living in relief camps for riot-hit victims in Muzaffarnagar where at least 34 children below 12 years lodged there had also died.

After Rahul Gandhi's sudden visit to the relief camps, Yadav, the chief of ruling Samajwadi Party, stoked a controversy on Monday claiming there are no riot victims at all in the camps and that people staying there are conspirators from the Congress and the BJP.

According to the report of the panel submitted to the Uttar Pradesh government, 4,783 people are still living in five camps including one in Loi (Muzaffarnagar) and Madarsa Taimul Shah, Malakpur, Barnavi and Edgah (all in Shamli).

To a question on whether there are any "conspirators" in the camps, Principal Secretary (Home) A K Gupta told reporters that the committee has said that "only displaced people are living in the camps".

"Most of the children who lost their lives are the ones who had been taken outside the camps for treatment by their parents or were referred to government hospitals for treatment," Gupta said amid allegations that children in relief camps who died perished due to cold wave.

The report quoted by Gupta said the the deaths of the 34 children occurred between September 7 and December 20.

"The cause of the death of all these children is different with about four dying because of pneumonia while some others died because of dysentery and one due to premature birth," Gupta said adding that the report was submitted yesterday.

On the conclusion of the report, Gupta said that it has been recommended that the quality and facilities in the camps should be improved, and steps should be taken for early return of the people living in the camps to their homes.

He said that all the children had got medical attention and "it cannot be termed as medical negligence or incapability of the doctors".

The panel headed by Commissioner Meerut had District Magistrates of Muzaffarnagar, Shamli and Chief Medical officers (CMOs) of these districts as members. It was constituted by the UP government to go into the factual details of the deaths of children as reported in the media.

Union Minister Beni Prasad Verma, meanwhile, demanded an "apology" from Yadav over his remarks that those living in relief camps are conspirators.