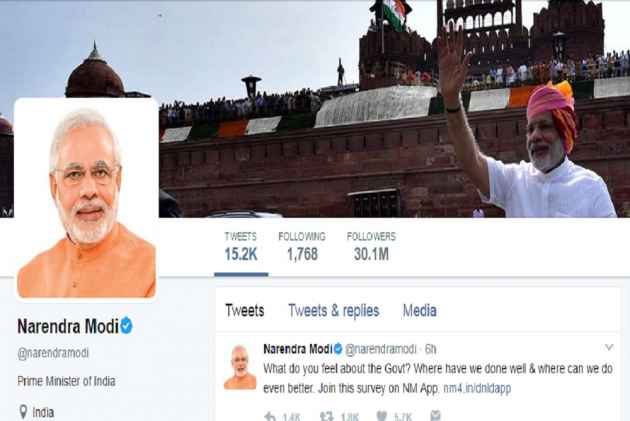 Print
A
A
A
increase text size
Outlook May 26, 2017 14:27 IST 3 years of Modi Government: Twitter Overflows With Wishes

With the completion of three years of Prime Minister Narendra Modi Government in power at the Centre, Chief Minister Yogi Adityanath on Friday took to micro-blogging site twitter and on behalf of Uttar Pradesh, heartily congratulated the former for fulfilling his commitment to the public.

Adityanath in his tweet said, "I on behalf of the people of Uttar Pradesh congratulate Honorable Prime Minister, Shri Narendra Modi for three years of good governance and development."

Echoing similar sentiments, in a series of tweets, Haryana Chief Minister Manohar Lal Khattar wrote; last three years of the NDA Government under the leadership of Prime Minister Modi have seen dawn of a new era of Governance that is Corruption Free, Transparent and Accountable.

Asserting that Indian borders are more secure than ever under the Bharatiya Janata Party (BJP) Government, Khattar said we are replying to provocations with firmness and our jawans have been empowered.

"Haryana is playing its role in realising @narendramodi ji's vision of a #NewIndia," he added.

@narendramodi The last 3 years have seen the dawn of a new era of Governance that is Corruption Free, Transparent & Accountable. #3YearsOfModiGovt

@narendramodi Haryana is playing its role in realising @narendramodi ji's vision of a #NewIndia. #3YearsOfModiGovt

@narendramodi Indian borders are more secure than ever. We are replying to provocations with firmness & our jawans have been empowered. #3YearsOfModiGovt

@narendramodi I congratulate PM @narendramodi , his entire team and millions of countrymen & supporters on successful #3yearsofModiGovt

Midi as BJP is going to win in all states with absolute majority. Congratulations. Dr. Rama Shankar Singh. Deoria. UP pic.twitter.com/ZxEa6rBxfP

Sabka Saath, Sabka Vikaas has been truly made possible - #India well on its way to becoming a Global Super Power. #3yearsofModiGovt

On the occasion of completion of three years of the National Democratic Alliance's ( NDA) government at the Center, Prime Minister Narendra Modi on Friday said these years have seen concrete steps that have transformed people's lives.

Earlier today, the Prime Minister arrived in Assam and began the celebrations by inaugurating the Sadia Bridge across River Brahamputra in Purana Sadiya.

The Prime Minister took to the social media to ask the people their views on completing three years as Government at the Center.

"What do you feel about the Govt? Where have we done well & where can we do even better. Join this survey on NM App," Prime Minister Modi tweeted.

The Bharatiya Janata Party (BJP) will be organising a pan-Indian festival-like publicity campaign to highlight the achievements of the Narendra Modi-led NDA three year rule.

The campaign's name has been linked with the surname of the Prime Minister- ' Making of Developed India (MODI).

All union ministers, BJP's Members of Parliament, chief ministers and deputy chief ministers of the BJP ruled states will take part in the massive exercise to ensure that Prime Minister's message of growth and development reaches every district in the country.

Union Home Minister Rajnath Singh will attend the events in Jaipur and Mumbai, while External Affairs Minister Sushma Swaraj will be in Delhi and Lucknow.

Union Ministers Arun Jaitley will participate in the MODI fest in Bengaluru and Ahmedabad; M. Venkaiah Naidu in Bhuwaneshwar and Chhattisgarh, Nitin Gadkari in Chennai and Ranchi in Jharkhand.

The Chief Ministers of the BJP-ruled states will not only take part in the MODI fest in their states but also in other states.

Intellectual meets will also be organised across the country wherein the achievements of the Modi government will be presented.

All the union ministers, MPs will attend two functions in the assigned state, one programme each in home state and constituency. (ANI)