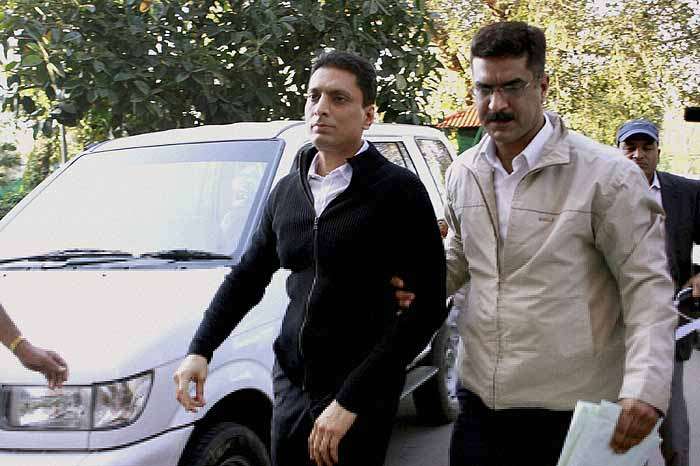 Castigating Swan Telecom promoter Shahid Usman Balwa for his "nefarious conduct" and "sinister and reprehensible" act during recording of his statement in 2G spectrum allocation case trial, a special court today imposed a cost of Rs one lakh on him for wasting its time.

Special CBI Judge O P Saini imposed the "nominal cost" on Balwa, facing trial in the 2G case, saying he had wasted time of the court and had also caused unnecessary inconvenience and adjournments on several occasions.

The court ordered that recording of Balwa's statement, which was halted after some objectionable contents were found in it, would resume and all the "objectionable part" shall be deemed to be deleted.

"Accordingly, considering their apologies on record, accused Shahid Usman Balwa is let off by castigating him for his nefarious conduct in the court accompanied by imposition of a nominal cost of Rs 1,00,000 on him for wasting time of the court, causing unnecessary inconvenience and forcing unnecessary adjournments on the court for several days," the judge said in his 67-page order.

"In view of the above discussion, all four applications (filed by Balwa) stand disposed of with the direction that the existing statement(s) shall remain on record minus the objectionable parts, wherever the same occur, whether detected or not, which shall be deemed to be deleted and that further recording of the statement of accused shall resume from the stage where it was stopped," the court said.

"The cost be deposited within seven days from today, failing which warrant of attachment shall issue," it said.

The order came while disposing of four separate pleas filed by Balwa seeking to record his statement afresh and for tendering apology for the mistakes that had occurred in his statement which was partly recorded on May 7 and 8.

The court, in its order, said that it had supplied a draft questionnaire to all the accused and had allowed Balwa to use pen drive for answering the questions to facilitate recording of answers.

"Finding them (Balwa and his lawyer) insistent and rather adamant, it (answering of questions) was allowed through the use of pen drive. When an accused wishes to be rambling and ranting, and, if I may say so, rambunctious and rampageous and insists upon it, sometimes it has to be allowed, more so when the case is quite complicated having serious consequences to the accused, as the instant case is," the judge said.

On the issue of whether to record Balwa's statement afresh, the court said, "Thus, in case of need, there is no bar in re-examining an accused under section 313 CrPC and one of the reasons for re-examining may be the errors committed by the accused in his statement deliberately or otherwise."

It observed that although the court had allowed use of pen drive and had permitted long and detailed answers as insisted on by Balwa and his counsel Vijay Aggarwal, they "had other designs of vitiating the proceedings by misusing the opportunity."

"I may note with regret that in the course of the day when I was checking the replies (by Balwa) on the computer screen, Vijay Aggarwal advocate and accused Shahid Usman Balwa kept repeatedly addressing me and thereby diverting my attention from the computer screen.

"I may also note that without any reason at two different times Vijay Aggarwal supplied me photocopies of two long judgements recently delivered by the Supreme Court. And kept requesting me to go through the same. This way he diverted my attention from the computer screen," the judge said, adding, "On account of this objectionable material contained in several replies went unnoticed and undetected."

"In view of the above discussion, I have no manner of doubt that this was done deliberately and designedly by accused Shahid Usman Balwa and advocate Vijay Aggarwal to mislead the court, to show the proceedings in poor light and to ultimately obstruct and subvert the judicial process by claiming prejudice," the special judge observed.