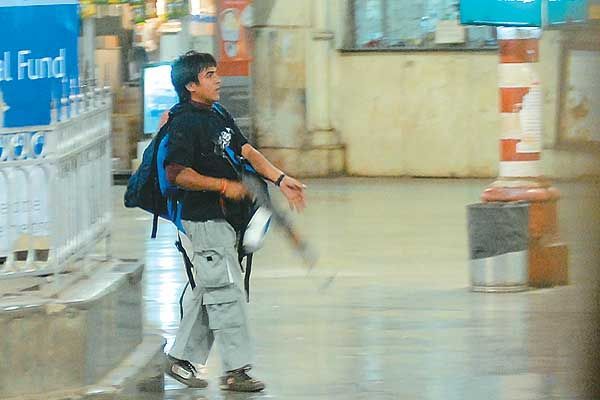 outlookindia.com
-0001-11-30T00:00:00+0553
Ajmal Kasab, the lone Pakistani gunman caught alive after the Mumbai terror attack, was hanged to death at the Yerawada central prison here in a top-secret operation this morning, less than a week before the fourth anniversary of the carnage.

25-year old Kasab was hanged at 7.30 am, Maharashtra Home Minister R R Patil said in Mumbai shortly after the hanging. Pakistan government was kept informed about the execution.

Kasab did not have any last wish or a will, Chavan told reporters in Mumbai.

The execution in the Mumbai attack trial brought closure to many people affected by the audacious strike by 10 terrorists of Pakistan-based terror outfit Lashkar-e-Taiba (LeT) in which 166 people were killed. Nine LeT men were killed during the 60-hour siege which began on the night of November 26, 2008.

Kasab was executed after he exhausted all legal remedies available to escape the noose with President Pranab Mukherjee rejecting his mercy plea on November 5.

Kasab, who has been lodged at the Arthur Road prison in central Mumbai ever since his arrest soon after the terror attack, was whisked out of his heavily-guarded cell in the intervening night of November 18 and 19, a senior police official said. The team, along with Kasab, reached Pune's Yerwada jail in the wee hours of November 19.

"The President rejected the mercy petition on November 5. I signed it on November 7 and on November 8, the Maharashtra government had been communicated to take action. It was decided that he would be executed on November 21 at 7.30 AM. and accordingly the whole process has been completed today," Shinde said, adding secrecy about the hanging was a key.

"We attempted to convey to Pakistan's Foreign Office that this decision has been taken and the execution will be done this morning. Since those were not accepted by Foreign Office, by fax we indicated the information to them," he said in New Delhi.

Minutes before execution, Kasab appeared to be nervous but was quiet and offered prayers, a jail official said.

"From his body language, we could make out that he was very nervous. However, he remained quiet before he was taken out from his cell for the hanging," the official added.

Kasab had also offered prayers and asked if his family was informed in advance about the hanging for which jail authorities replied in positive, the official said.

'Tell my Ammi', this was the message conveyed by Kasab when he was told about his November 21 execution, official sources said in New Delhi. He was informed on November 12 about his hanging, the sources said.

Nooree Lai, mother of Kasab, was apparently the closest person to him as he only uttered her name when asked about his last wish, the sources said.

After completion of the formalities, Home Secretary R K Singh wrote to Foreign Secretary Rajan Mathai to inform Kasab's mother and other family members who are in Pakistan.

Accordingly, the authorities, through the Indian High Commission in Islamabad, had sent a letter to his mother through courier yesterday, fulfilling his last desire, the sources said.

Kasab was also made to sign his death warrant before being moved to the Pune jail on November 19.

Official sources said a senior jail official read out the death warrant to Kasab at his cell and also informed him that his clemency petition had been rejected by President Pranab Mukherjee.

After reading out his death warrant, Kasab was asked to sign it which he did, the sources said.

Later, he was taken by the Yerwada Jail police and the Mumbai police was kept out of the loop to maintain secrecy of the operation.

Barring a couple of officers, the 200-strong contingent of ITBP, which has been guarding him since March 2009, had been kept out of loop about his transfer to Pune jail.