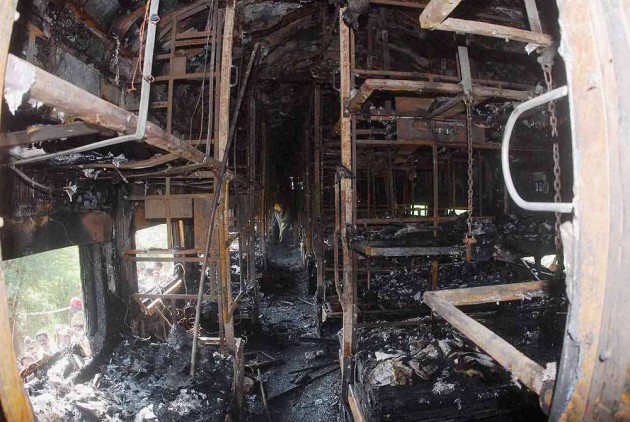 A devastating fire ripped through an AC coach of the Bangalore-Nanded Express train, charring to death 26 people, including two children, in sleep and leaving 13 others injured in the wee hours today in the district.

The fire broke out in the AC 3-tier coach B-1, fourth from the engine, near Sri Satya Sai Prashanti Nilayam Railway station, about 170 km northeast of Bangalore, at 3.45 am when most of the passengers were fast asleep.

There were 65 passengers in this coach, many of whom managed to jump out or escape by breaking open the window panes of the toilet cabins, Railway and police officials said.

After noticing the fire, the driver stopped the train near Kothacheruvu station and the ill-fated coach was detached, preventing the fire from spreading.

According to survivors, they woke up to the "burning sensation" and screams of "fire fire" and cries for help, and managed to escape rushing towards the door and jumping out or by breaking open the windows in lavatories.

Though 39 of the passengers were lucky as they managed to alight, some of them lost their loved ones on board.

Charan, a resident of Bangalore, saved 20 other passengers from the bogie but his wife and fahter-in-law were consumed by the fire, AP Revenue Minister N Raghuveera Reddy, who hails from the district said.

Ramamurthy, one of the survivors, said he was suddenly shaken from his deep slumber as smoke and fire engulfed the compartment.

"I saw panic-stricken people scrambling towards the door, all trying to get out. I managed to get out when the train stopped," he said.

Railway Minister Mallikarjun Kharhe, who rushed to the accident spot, said 26 people have died and the bodies have been sent for forensic examination and kept in the hospital in Bangalore for identification.

He said only nine bodies had been identified and efforts were on to find out the kith and kin of the victims through the addresses given by them or using the mobile phones. A two-year-old baby girl is among the dead.

SP of Guntakal Railway Police Janardhan said 13 people were injured in the mishap.

Kharge announced an inquiry by Railway Safety Commissioner adding the probe would unearth "what are the lapses.. How it happened, lack of maintenance or negligence of staff or faulty electricity , everything will be done."

Quoting preliminary reports, Kharge, who described the incident as "tragic and most unfortunate" said a short circuit could have caused the fire but the inquiry would throw the light on the exact cause.

Railway Board Chairman Arunendra Kumar said prima facie there could be two reasons - one is short circuit and the other presence of inflammable material.

"Preliminary reports indicate that the cause of the fire was electrical short-circuit near the Air-Conditioning Unit," Andhra Director General of Police B Prasada Rao said.

The train had left Bangalore at 10:45 PM last night for Nanded in Maharashtra with 16 coaches, South Western Railway said.

"We woke up to the screams of fire fire...Everybody was screaming," said Patil, who was on the ill-fated coach but survived along with his father.

"It was like Agni Kund," as he watched the burning bogie a little distance away after jumping out, M B Patil, father of Patil, said. "It was all over in 15 minutes," describing the experience as "terrible".

Another passenger undergoing treatment at one of the hospitals said he broke open the windowpane to let some air in as people were finding it difficult to breathe due to thick smoke in the air-conditioned compartment.

The Revenue Minister, who supervised the relief and rescue operations, said most of the bodies were beyond recognition and could be identified only after conducting DNA test.

Forensic teams from Hyderabad collected samples for analysis from the mishap site. Later, the bodies were brought to government-run Victoria Hospital in Bangalore.

Prime Minister Manmohan Singh expressed shock and grief over the loss of lives in the mishap and spoke to Kharge and inquired about the rescue and relief works.

The Railway Minister announced an ex-gratia of Rs 5 lakh to the next of kin of the deceased, Rs 1 lakh for grievous injuries and Rs 50,000 for simple injuries.

This is the second train mishap in Anantapur district after last year's train tragedy in March in which 25 passengers were killed near Penukonda when the Bangalore-bound Hampi Express rammed into a stationary goods train after the driver apparently overshot the signal near the station.

Speaking to reporters at Sathya Sai Prashantinilayam station, Kharge said based on the findings of the Railway Safety Commissioner action would be taken if lapses were found on the part of the officials.

He said a committee under the Railway Board had also been constituted into the mishap and another independent unit under civil aviation will also investigate and find out the reasons and suggest measures to "improve the conditions."

"We will also see safety measures... Some people smoke in the compartment, carry liquor or sometimes carry explosives. All this will be checked," Kharge said.

Continue FREE with Ads Pay Rs. 1 to Read Without Ads
READ MORE IN:
National
Next Story : BJP Leader Killed in Spat With Neighbour in Chhattisgarh
Download the Outlook ​Magazines App. Six magazines, wherever you go! Play Store and App Store