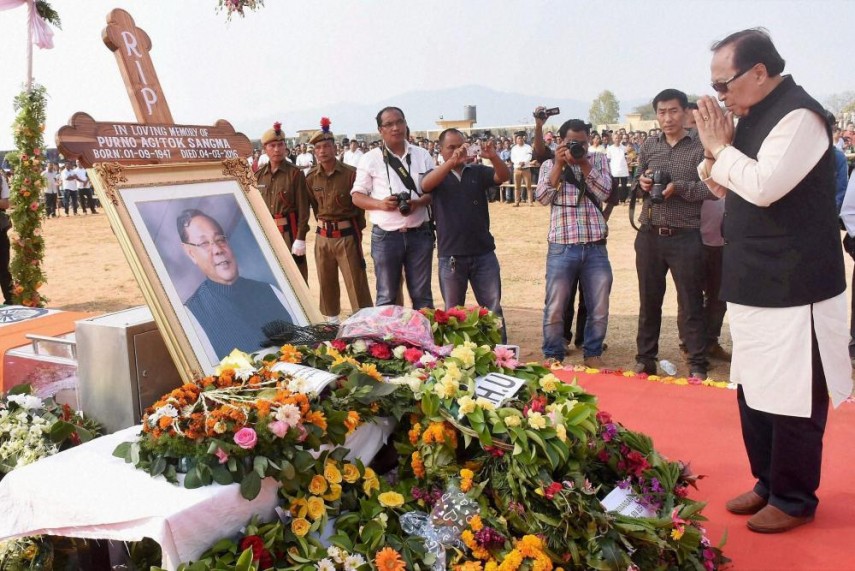 Meghalaya lost one of its tallest leaders and former Lok Sabha Speaker P A Sangma in 2016, which also saw ruling Congress suffering back-to-back electoral defeats amid murmurs of dissidence and militant activities in the state apparently hit by demonetisation.

The people of the state rejected Congress candidates in the parliamentary bypoll and also in the recently-concluded tribal autonomous district council elections.

Congress has never come close to winning the Tura parliamentary seat held by P A Sangma for over four decades.

The party, which introduced a law barring a legislator to hold two elected posts resulting in seven of the eight MLAs holding 'dual posts' vacating the council membership, however failed to impress voters.

Home Minister HDR Lyngdoh who fielded his son from his constituency in Sohiong was defeated while only two of the six candidates the party fielded managed to win from their respective seats to the two autonomous district councils.

Police claimed militants have been hit by demonetisation particularly in the western part of the state where terror activities were frequent.

Meghalaya co-hosted with Assam the 12th edition of South Asian Games in February. Eight sports disciplines including women's football, badminton and boxing were held in the state.

Mukul Sangma had a narrow escape when his official car was hit by a tourist taxi in February. None was hurt but the chief minister's car was damaged.

The state government also formed a consultation committee of political parties to pursue the long-pending inter-state boundary issue with Assam. The panel was set up after the Centre turned down Meghalaya's request to appoint a boundary commission to resolve the issue.

The Comptroller and Auditor General of India rapped the forest department and six cement companies for 'conniving' to set up cement plants in forest areas resulting in commercial benefits of over Rs 42 crore.

The 65th plenary session of the North Eastern Council (NEC) was held here and was addressed by Prime Minister Narendra Modi. During his visit, Modi tried his hand in playing the Khasi traditional drum.

Twenty-nine people were killed and nine injured when a bus they were travelling in skidded off the road and rolled into a 500-feet deep gorge in remote Sonapur village in East Jaintia Hills district.

During the year, the state government gave its nod to 100 per cent enhancement of salaries for teachers in all ad hoc secondary and higher secondary schools.

Meghalaya became the 21st state in the country to ratify the Goods and Service Tax (GST) Bill which was unanimously passed by the assembly.