2016: It Was Consolidation Time for TRS in Telangana 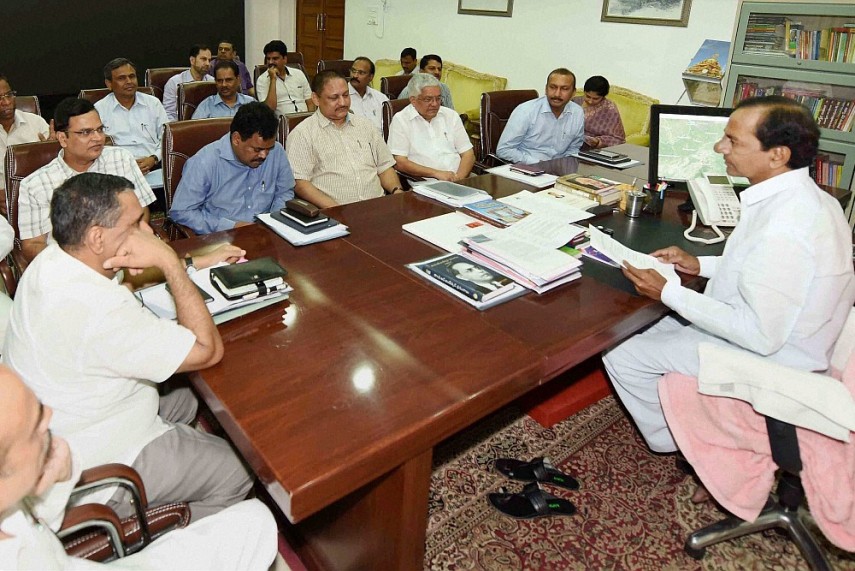 2016 was a year of consolidation for ruling TRS in Telangana as it put itself firmly in the saddle by winning it big in the Greater Hyderabad Municipal Corporation (GHMC) polls.

Beyond politics, star sportswomen from Hyderabad Sania Mirza and P V Sindhu dazzled on the sports arena with their superb performances on the world stage.

For a party that had not been a major force to reckon with in the city, the comprehensive win in the GHMC polls (bagging 99 out of 150 seats in the civic body) in February was a morale booster for TRS. The party did not contest the previous GHMC elections held in 2009.

Besides being the jewel in the crown of Telangana, Hyderabad is equally significant politically as the GHMC is spread over 650 sq km and covers four Lok Sabha constituencies.

Only the MIM (winning 44 seats) could withstand the onslaught of the ruling party in the GHMC polls and Opposition Congress and TDP-BJP had to bite the dust.

The TRS government is now focusing on implementing its flagship schemes like 'Mission Bhagiratha' that promises to provide safe drinking water to all households and 'Mission Kakatiya' for renovating tanks and other water bodies.

The ruling party had even vowed not to seek votes in the next assembly elections if it failed to provide piped drinking water.

The TRS government often claims to be number one in the country in implementing welfare programmes for the disadvantaged sections as it hiked social security pensions and implemented other welfare measures.

However, Opposition Congress and TDP hit out at TRS for not implementing farm loan waiver at one go and allegedly not releasing pending dues for students' tuition fees reimbursement and the much-publicised two-bedroom houses for poor.

The state government received a shot in the arm in 2016 as Telangana shared honours with neighbouring Andhra Pradesh as the two Telugu-speaking states emerged as number one states in Ease of Doing Business rankings given by the Centre.

Having introduced a "revolutionary" industrial policy, named Telangana State Industrial Project Approval and Self Certification System, the state government has till now accorded approvals to 2929 units with an investment of Rs 49,463 crore, according to Industries Minister K T Rama Rao.

As many as five lakh new jobs have been created.

In a major administrative reform in the state, the government undertook districts re-organisation during the year and increased their number from 10 to 31. Revenue divisions and other administrative units have also been reorganised.

The state government planned to construct a new Secretariat building complex by demolishing the existing one and sought the buildings to be vacated by Andhra Pradesh.

The neighbouring state shifted its Secretariat from the common capital of Hyderabad to its permanent capital city of Amaravati during the year.

Congress voiced strong opposition to raise a new Secretariat by demolishing the existing buildings complex, but the government has not come up with a final word on the matter.

A new and spacious residence and office buildings complex was constructed for the chief minister during the year and reports in a section of the media claimed that some bathrooms in the residence are "bullet-proof".

Meanwhile, the friction, often witnessed between Telangana and Andhra Pradesh following a bitter state division in 2014, continued in the outgoing year as well.

There was no headway in final division of assets between the two states, including the Andhra Pradesh Bhavan in New Delhi, though two-and-a-half years have passed since bifurcation.

There has been no let up in disputes over river water sharing as well.

In a move hailed as being pragmatic, the Telangana government came out strongly in support of the Centre's demonetisation drive.

The deadly 2013 Dilsukhnagar blasts in Hyderabad reached a logical conclusion this year with a special NIA court handing out capital punishment to five of the convicted persons in the case.

Hyderabad had a reason to smile in 2016 with local girl and Telangana brand ambassador Sania retaining her number one position in women's doubles in the world for the second year in a row.

The city girl Sindhu, though she has her roots in Andhra Pradesh, made the country proud by winning silver medal in the Rio Olympics.