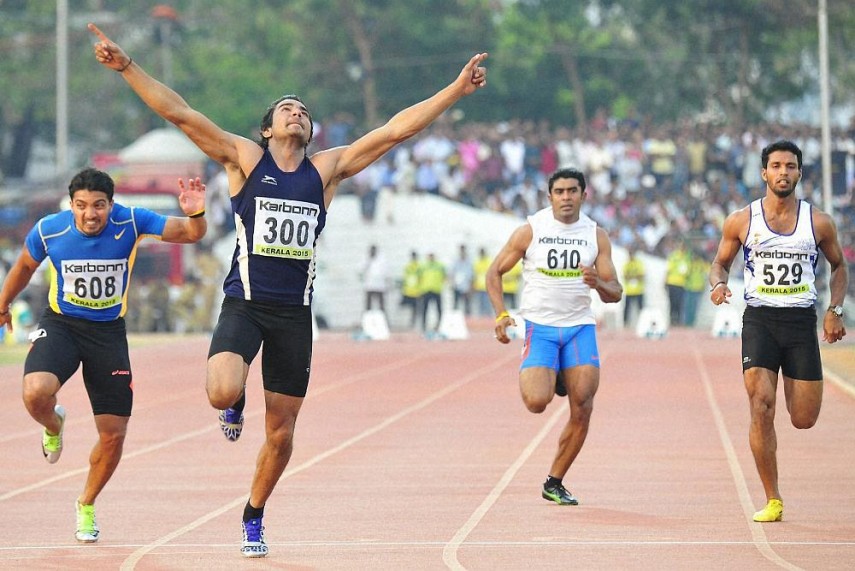 A disastrous Olympic campaign where they made up just the numbers and a doping fiasco to add to the misery, Indian athletics yet again did little to shrug off the tag of country's most underachieving sport in the year gone by.

The only silver lining in an otherwise unfruitful year was the world junior record set by javelin thrower Neeraj Chopra, who became the first Indian to own a world record, though in the junior category.

That gave the embattled Athletics Federation of India the bragging rights that India also can produce world beaters in athletics.

The 18-year-old lad from Haryana hurled the spear to a stunning distance of 86.48m at the IAAF World Under-20 Championships in Bydgoszcz, Poland, nearly two meters beyond the earlier world Under-20 record of 84.69m which was in the name of Latvia's Zigismunds Sirmais.

Chopra, currently studying at DAV College in Chandigarh, also broke the existing national senior record of 82.23m which was in the name of Rajinder Singh.

His achievement was all the more stunning as his effort was better than that of Rio Olympics bronze-winner Keshorn Walcott (85.38m) of Trinidad and Tobago.

Chopra did not qualify for Olympics as his achievement came after the Olympics qualifying deadline of July 11 though he crossed the Rio entry standard of 83m.

A record 34 track and field athletes (out of India's total 117) took part in the Olympics -- the grandest of the world stage -- but in the end, except for Lalita Babar it turned out to be a mere presence.

The Rio performance was one of the worst in India's athletics history. In London 2012, two athletes -- Vikas Gowda and Krishna Poonia -- made it to the finals while two race walkers came up with national record timings.

But this time the performance was disappointing despite the Sports Ministry splashing crores of rupees on their training under the Target Olympic Podium Scheme.

Babar qualified for the finals in the women's 3000m steeplechase, the first time by an Indian in track events after P T Usha did 32 years ago in 400m hurdles in 1984 Los Angeles. She finished a creditable 10th to be the only saving grace among her underperforming colleagues.

The build-up to the Games was not good either as it was rocked by dope flunks by two national record holders -- shot putter Inderjeet Singh and 200m runner Dharambir Singh. Both were barred from taking part in the Olympics.

Dharambir was later banned for eight years last month as it was his second dope offence. The case for Inderjeet is still in the hearing stage before the Anti-Doping Disciplinary Panel of the NADA.

On the administrative front, Adille Sumariwalla was re-elected unopposed as the president of AFI for a second term at its Annual General Body Meeting. Sumariwalla, also a member of the powerful IAAF's ruling council, was the lone nomination received for the top post and he will serve as president till 2020.

Despite being lightweights in the competitive arena, India continued to rule the roost as far as doping was concerned and the country was placed once again in the top three in a WADA report based on the information supplied by various national bodies.

India had the third highest Anti-Doping Rule Violations (ADRVs) in 2014, with 96 cases, behind Russia (148) and Italy (123), according to a World Anti-Doping Agency (WADA) report.

In that, athletics contributed most dope cheats with 29 cases, followed by powerlifitng (23) and weightlifting (22) as the trend of the last few years continued.

The year 2016 was also a sort of achievement for Odisha sprinter Dutee Chand who came out of IAAF ban following a 'gender test' to qualify for the Olympics though her campaign in Rio ended disappointingly as she finished seventh in her 100m heats with a below-par 11.69secs.

The 20-year-old became the first Indian female athlete to qualify for the 100m dash in Olympics in 36 years after legendary P T Usha competed in the blue-riband event in the 1980 Moscow Games.

She qualified for the Olympics with a national record time of 11.24 seconds at the 26th G Kosanov Memorial Meet in Almaty, Kazakhstan.

The year began with the Indian track and field athletes enjoying expected supremacy in the South Asian Games (SAG) in Guwahati by winning 28 gold medals out of the country's 188. Veteran long distance runner Kavita Raut clinched gold in women's marathon and qualified for Olympics in the process.

Then, the domestic season began with the athletes making frantic efforts to make the Rio Olympics ticket. Federation Cup, National Inter-State Championships and three Indian Grand Prix legs served as the domestic events while many athletes embarked on training-cum-competition tours outside the country to try and qualify for Rio.

The notable foreign exposure trip was the 38-member Indian track and field team for a 12-week training-cum-competition stint at the world class facility at Spala, Poland with dope tainted Yuri Ogorodinik among the support staff.

Several national records were broken in the process and the country saw some remarkable performances in the build-up to the Olympics, which also raised doubts about how clean they were in achieving these Rio standards.

It was, however, a stark contrast at the Olympics where the pre-Games 'remarkable' performances could not be matched and very few athletes could even achieve their personal best.

Topping the list of flops was none other than triple jumper Renjith Maheshwary who made it to his third Olympics after producing the season's third-best performance in the world at that time.

The Kerala jumper, who has flopped time and again on the world stage, touched down at 17.30m at the Indian Grand Prix in Bengaluru in July to qualify but crashed out in the first round in Rio managing just 16.13m.

Another big let down was discus thrower Vikas Gowda who travelled to Rio despite being on the recovery path from an injury. He ended his challenge with a best throw of 58.99m that was nearly six metres short of his best.

Gowda's female counterpart, discus thrower Seema Antil, finished a disappointing 20th in the qualifying round , and 20th overall, with a best throw of 57.58m, well below her personal best of 62.62 metres.

Legendary P T Usha's prodigy Tintu Luka came a cropper on the global stage once again as she failed to qualify for the semifinals of the women's 800m race after finishing sixth in her heat race.

The 27-year-old Luka clocked a season's best of 2 minute 00.58 seconds to finish sixth in heat number 3 and 29th overall out of a total 65 runners. It raised questions on how long Luka will take to make a mark at the global stage under Usha.

Rated high after their 2012 London show, the race walkers also produced a disappointing show this time in Rio and Manish Singh was the best Indian at 13th among men in the 20km race walk while Khushbir Kaur finished at 54th among women.

The women's 4x400m relay quartet finished seventh in the heats while the men's team faced the embarrassment of being disqualified.

O P Jaisha created an unnecessary controversy after returning home from the Olympics. Jaisha, who finished 89th and also fainted at the finish line, accused the Indian officials for not providing her water and drinks during her Marathon race despite designated stations being given for the country, a claim denied by AFI.

Her coach and AFI said she did not ask for drinks -- for which there will have to be permission a day prior to the race. A probe by Sports Ministry absolved the AFI from any inaction and blamed the athlete for the confusion.

Jaisha did not get the support of her coach Nikolai Snesarev who said that she herself had refused when asked by him if she would need personalised refreshment during the race.

He also said that Jaisha had never used personalised drinks during marathon competitions.

Sports Ministry set up a two-member inquiry committee to probe Jaisha's case but later ruled that there was no fault on the part of the athletics officials.

Towards the end of the year, the capital city witnessed a top class Delhi Half Marathon race with Kenya's reigning Olympic champion Kipchoge winning the event.

He said he came to run in the half marathon well aware of the poor air quality of Delhi to inspire the young generation of the country to take up running.

Continue FREE with Ads Pay Rs. 1 to Read Without Ads
READ MORE IN:
Sports
Next Story : WB Gets In Touch With Pakistan Over Water Dispute With India
Download the Outlook ​Magazines App. Six magazines, wherever you go! Play Store and App Store