Seven students were on their way to appear for an exam in Narela in the Honda City car when the accident took place. The police claim the car was being driven by a student named Rajat at high speed when the mishap occurred. 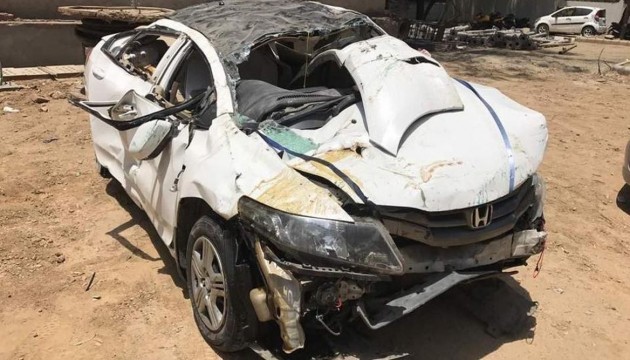 It took the police over 15 minutes to pull the students out as the car was completely damaged. The car skid off the flyover and fell off to land upside down on the ground.

Print
A
A
A
increase text size
Outlook May 15, 2017 13:01 IST 2 Students Died, 5 Critical After Honda City Falls Off Delhi Flyover

In a shocking incident on Monday, two teenagers were killed and five others injured after a Honda City car skid and fell off a flyover in Punjabi Bagh area of west Delhi on Monday morning.

According to a Hindustan Times report, seven students, including two girls, from Delhi Institute of Professional studies — were on their way to take an exam at IP college in Narela, when the incident occurred around 8am.  According to the police officials the student who was behind the wheels Rajat (18) lost his control over the car and crashed against the divider. “The car was at high speed,” Hindustan Times quoted police officials.

The police added that the car flung in the air on impact and fell off the flyover breaking the grille. It landed upside down on the ground and two of the students died on the spot.

The police received a PCR call from a passerby who was on his way to office from the route. The police team rushed to the spot, pulled the students out and took them to the hospital. “Sanchit (18) and Ritu (18), were declared dead on arrival at the hospital while the other five are critical. They have been shifted to AIIMS and are in the ICU,” Hindustan Times quoted  a senior police officer.

It took the police over 15 minutes to pull the students out as the car was completely damaged. “We even called the fire department to help us pull out the occupants as the car’s doors and roof was completely crushed. One student died on the spot as he was crushed between the roof and his seat. Preliminary examination suggests that excessive blood loss and severe head injuries led to their death. Their bodies have been sent for a post mortem and their families have been informed,” a senior police officer said.

The police have recovered some books and identity cards of the students from the car. “They were on their way for an exam as they were also carrying their admit cards and books. They were to appear for their second semester exam.”

All the students first assembled at his residence in East Punjabi Bagh, Delhi, and then left together. It is still unclear how they lost control of the wheel. We have accessed footage from CCTV cameras installed in the area to see if their were speeding. It appears that the car was being driven at least at the speed of 100km per hour,” a police officer said.