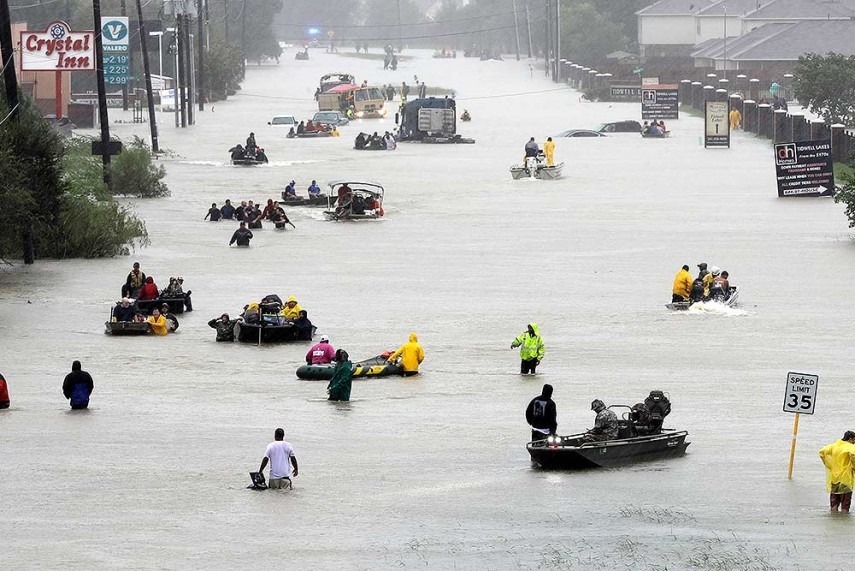 Operators at the Arkema Inc facility said the Harris County Emergency Operations Center notified them at approximately 2 am CDT (0700 GMT), of "two explosions and black smoke" rising from the plant in Crosby, a town about 25 miles northeast of Houston.

Arkema warned that "a threat of additional explosion remains," and urged people to stay out of the evacuation zone.

The Harris County Fire Marshal's Office in a later tweet confirmed "a series of chemical reactions at the @Arkema_Inc Crosby facility," which manufactures organic peroxides that can combust if not cooled to proper temperatures.

The incident confirmed the fears of operators who had already ordered the evacuation of an area within 1.5 miles (three kilometers) of the plant, which operators had said was at risk of exploding due to a "critical issue" triggered by monster storm Harvey's torrential rains.

The Harris County Sheriff's Office said one deputy had been taken to the hospital after inhaling fumes from the plant, with nine others driving themselves there "as precaution."

In a later tweet the sheriff's office said company officials said "the smoke inhaled by 10 deputies near plant in Crosby is beloved to be a non-toxic irritant."

But Arkema also said in a statement that "exposure to organic peroxides may cause eye, skin and/or respiratory irritation. The smoke may also contain organic peroxide degradation products, including hydrocarbons and alcohols."

The company said those products could cause eye, skin or respiratory irritation as well as nausea, drowsiness or dizziness, and urged residents within the 1.5-mile evacuation area to turn off their air conditioners to avoid potential smoke exposure.

East of the explosion site rural areas of Texas were drenched as Harvey headed eastwards, with the city of Port Arthur especially hard hit.

Vice President Mike Pence was to visit Texas Thursday to meet victims of the torrential rains and assess damage.

Officials believe at least 33 people have been killed in the storm, and expect the toll to rise further -- although many of those missing may simply have no phone or access to power.

More than 30,000 people have found refuge in shelters across the Lone Star State, from the giant Houston convention center to small churches, according to the head of the Federal Emergency Management Agency (FEMA), Brock Long.

In Houston, where Mayor Sylvester Turner issued an nighttime curfew to aid search efforts and thwart potential looting, the two major airports had reopened on a limited basis, signaling a slow return to normality.

At least a quarter of Harris County, which includes Houston and Crosby, is still under water.

Crosby resident John Villarreal, 45, told AFP he learned of the Arkema incident after leaving his home -- situated about a mile from the facility -- to survey flooding in the neighborhood when he saw "a lot of smoke, and you could see the flames in the smoke."

"We could hear a few pops," he said. "I would call it like an aerosol can in a fire type deal."

Villarreal -- who spent five years working at the plant making organic peroxide approximately two decades ago -- said he and many neighbors did not evacuate the area because "there was really no clear direction" from authorities concerning potential risks of staying.