17 Killed, Over 70 Injured in Fresh Violence in Kashmir 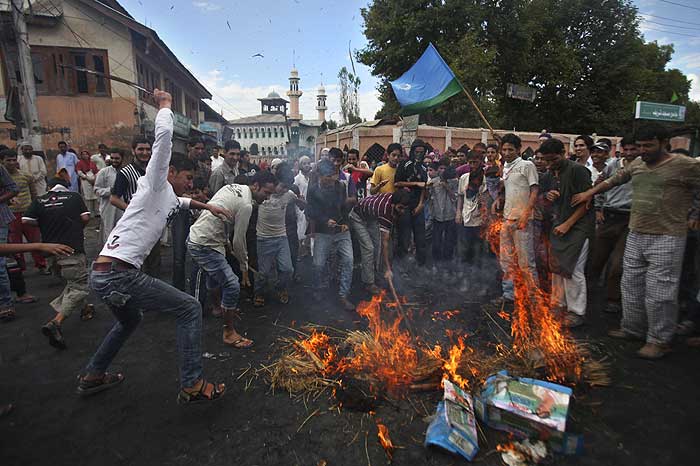 Kashmiri protesters beat the remains of an effigy of U.S. President Barack Obama after burning it during a protest in Srinagar.
AP Photo/Altaf Qadri

outlookindia.com
-0001-11-30T00:00:00+0553
In a sudden flare-up of violence in Kashmir today, 17 people, including a policeman, were killed and over 70 injured with mobs torching several government properties and a school, some of the trouble triggered by a TV report alleging desecration of the Quran in the US.

The state cabinet, which met this evening, condemned the alleged act of desecration and made a fervent appeal to the people not to take law in their own hands.

In New Delhi, Prime Minister Manmohan Singh voiced concern over the ongoing unrest in Jammu and Kashmir. He also sought to reach out to the people in the state, saying their grievances have to be addressed and promised talks within the Indian Constitution with those who abjure violence.

Five persons were killed and more than 20 others injured in firing by security forces at Tangmarg, 45 kms from Srinagar, in Baramulla district after protesters went on a rampage setting ablaze a private school, run by a minority educational group, following the report of desecration.

DGP Kuldeep Khoda said 41 persons were seriously injured and they included 2 SPs one of whom was airlifted from Bandipora to Srinagar.

The agitators then attacked a police station and tried to ransack it, prompting the security forces to fire at them.

While two youths -- Muddasir Ahmad Parray and Abdul Majid -- were declared dead at the nearby Magam Sub District Hospital, another youth succumbed to injuries at a city hospital here. He has been identified as Abdul Qayoom, officials at the hospitals said.

Another mob attacked a security forces camp at Humhama in Budgam district, prompting retaliatory fire in which two were killed.

In Charar-e-Sharief, protesters pelted stones at a CRPF camp, Deputy Commissioner, Budgam, Rafi Ahmed said. The CRPF personnel resorted to firing to disperse the mob. Seven persons were injured on of whom succumbed to his injuries.

A woman died on the spot when she was hit by a stray bullet inside her residential compound at Ompora in Budgam.

A policeman, Devender Singh, was killed when he was run over by a vehicle while chasing a stone-pelting mob also in Budgam.

In another clash in Bandipora, one person was killed and two others injured when security forces opened fire to quell a stone-pelting mob, police said.

Three persons lost their lives in clashes in Pampore town of Pulwama district and other parts of the Valley while a youth injured in firing allegedly by security forces succumbed in hospital.

A teenaged boy was killed and another critically injured when security forces allegedly opened fire to disperse a stone-pelting mob in Anantnag district of South Kashmir late in the evening, police sources said.

Aaqib Ahmad Wagay and Firdous Ahmad were hit by bullets when security forces opened fire in self-defence after their vehicle was attacked by a stone-pelting mob near Lazibal, 60 kms from here, the sources said. Both the injured youth were taken to hospital where Wagay was declared dead

One person was killed in a firing incident at Chanakhan in Sopore area of Baramulla district, the sources said.

Conflicting reports were, however, received as to who opened fire that killed Rafiq Ahmad Teli but a police spokesman said he was felled by a bullet fired by militants who tried to target security forces.

The spokesman said one policeman was also injured in the firing by the ultras.

A mob set on fire the house of a police constable at Kreeri in Pattan area of the district as he was posted at police station Tangmarg where five persons were killed in police firing. One of the deceased was a resident of Pattan area.

Today's violence coincided with the call of hardline faction of Hurriyat Conference headed by Syed Ali Shah Geelani for a march to the local office of the United Nations Military observors at Sonawar here. The march was, however, foiled by the authorities with the strict implementation of the curfew in the city.

A youth was feared dead after he jumped into a river to escape arrest while being chased by security forces at Khannabal, 55 kms from here in Anantnag district.

Two others also jumped along with the youth but they managed to swim to safety. Efforts are on to trace the missing youth, the sources

In Poonch, six persons, including two policemen, were injured when a mob turned violent.

Police resorted to teargassing and fired about 30-40 rounds in the air to disperse the mob, which pelted stones at a forest building and later set it on fire, besides burning two vehicles belonging to forest department, they said.

According to the police, four persons and two policemen were injured during the clashes.

Reports of demonstrations and bandhs were also received from towns of Bhaderwah, Bhalla, Doda, Batote and Banihal in Jammu province.

The state cabinet condemned the alleged act of desecration of  the Quran in the US and appealed to the people not to take law in their hands while staging protests against the incident.

The state cabinet meeting chaired by Chief minister Omar Abdullah this evening took stock of incidents of law and order breakdown in parts of the state which were prompted by reports about the alleged incident of desecration of the holy book in the US, an official spokesman said.

He said the cabinet was unanimous in condemning the alleged acts as reported by an international news channel.

The spokesman said the cabinet also expressed its understanding of the genuinely hurt sentiments of the people on this account.

However, it was decided to make a fervent appeal to the people of the state not to take law in their own hands while staging protests against the alleged incidents which only result in an avoidable loss of life and property, the spokesman added.

"Geelani strongly condemns the burning of a private school at Tangmarg. It is our religious duty to safeguard the property and life of the minorities," Hurriyat spokesman Ayaz Akbar told PTI.

"Control your sentiments ... The misdeed of a person should not be made an excuse to target any minority community," the spokesman quoted Geelani as saying.

The hard line Hurriyat Chairman cautioned people against attacking the properties of the minority community saying "it will only harm our movement".

In New Delhi, the US Ambassador Timothy J Roemer expressed dismay over the violence following reports of "a misguided individual desecrating the Quran".

He said the move was prompted after reports of the alleged sacrilege act. Also the channel was not registered with the Union Information and Broadcasting Ministry as required by law.

"We believe there is a gameplan...We appeal to the good sense of the people in Kashmir. Please don't take law in your own hands in this matter. Please cooperate with the administration," he said.

Meanwhile, according to officials, all flights to and fro Srinagar have been suspended today for three days in view of the situation.

The move to suspend the flights was taken after a security review which decided that ferrying the airport staff and passengers to Awantipora airbase, 32 km from here, was a security risk, the officials said.

The flights to Srinagar have been diverted to Awantipora airbase since September 3 due to resurfacing work going on at the only civilian airport in the summer capital of the state, which is expected to be completed by September 15.

Meanwhile, airforce officials manning the Awantipora airbase refused permission to a spice jet flight to land today in view of the deteriorating law and order situation in the valley. The flight returned to Delhi, the officials said.