16 Killed in Stampede in Haridwar 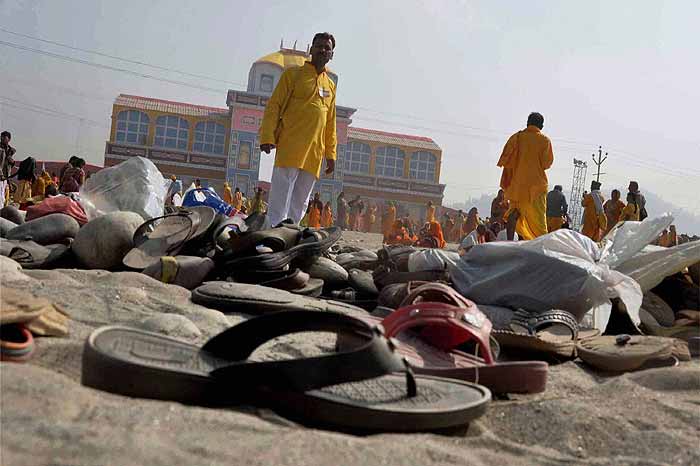 Footwears left in a field after a stampede during Gayatri Mahakumbh, a religious ceremony, in Hardwar. At least 16 people, mostly women, were killed and several others injured in the stampede.
PTI Photo

outlookindia.com
-0001-11-30T00:00:00+0553
Sixteen people--14 women and two men--were killed in a stampede today during a religious ceremony attended by tens of thousands of devotees near the famous 'Har Ki Pauri' ghat on the banks of the Ganges river.

At least 32 people were also injured in the stampede that broke out when people tried to enter the 'yajnashala'(place of sacred fire ceremony) at Chandidweep Ghat for the birth centenary celebrations of Acharya Pandit Shriram Sharma.

The Acharya, a Saint-Scholar-Philosopher, was the founder of Shantikunj Ashram and also the Founder Father of 'Akhil Vishwa Gayatri Pariwar' which has a huge following.

SDM Harbir Singh said 16 people were killed in the stampede in this popular pilgrim town in the hill state of Uttrakhand.

"It appears that suffocation in the area led to the stampede but exact cause will only come out after an inquiry," he said. Most of the dead were reported to be aged.

Eyewitnesses said the stampede in this holy town occurred at around 1030 am when a few people tripped while those behind continued to push forward after tens of thousands devotees had gathered to proceed to the fireplace at the ashram to make offerings.

The devotees were climbing stairs to cross a mini bridge ahead of the venue for the religious ceremony 'Gayatri Mahayagya', a male survivor said.

The situation soon went out of control with several women and children falling on the ground.

Uttrakhand Chief Minister B C Khanduri visited the mishap site and announced a compensation of Rs two lakh to the kith and kin of each of the victims. A compensation of an identical amount was also announced by Shantikunj Ashram.

District authorities ordered the organisers of the celebrations to call off the five-day event which was due to end on Thursday.

The organisers agreed to end the celebrations tomorrow after a prayer meeting.

Police sources said nearly two lakh people from home and abroad had gathered for the ceremony, which is considered to be biggest after the Kumbh mela.

Police officials blamed the Shantikunj Ashram authorities for not involving the police and district administration in the management of the ceremony where lakhs of people had gathered during the past few days.

Himachal Pradesh Chief Minister Prem Kumar Dhumal was also holding 'yajna' at the ashram when the stampede broke out.

Some of the injured men and women limped as they tried to walk while others were taken away on stretchers.

Ambulances, with sirens screaming, reached the scene and rushed the injured to a makeshift 10-bed hospital that the organisers had set up to deal with emergency situations.

"People fell on each other and the resulting stampede killed two in front of me. I don't even known if my mother, who was shouting for help, is died or alive," a female survivor said.

Khanduri said the deaths occurred due to suffocation. The condition of at least 10 persons was critical.

He said the five-day function, which began on November 6, has been curtailed and would now culminate tomorrow.

Another version was that when a sea of humanity tried to gatecrash into the 'yajnasthal' to offer 'aahuti' volunteers of the ashram allegedly resorted to lathicharge that created panic in the area.

As the lathicharge began, people ran for safety falling on each other creating a stampede, police sources and eye witnesses said.

Chaos reigned supreme in the area in the absence of police force. The function was being managed by the volunteers of Shantikunj only and services of police were not utilised.

Pandian said most of the victims belonged to Jhansi, Munger and Sultanpur areas of Uttar Pradesh.

Today's stampede is the second within 19 months at Haridwar. In the last stampede on April 14 last year, seven people were killed during the mahakumbh mela.

BJP President Nitin Gadkari also visited the stampede site and met some of the injured.

Shantikunj Ashram head Pranav Pandaya later took the moral responsibility for the incident and announced a separate compensation of Rs two lakh per family of the victims.

BJP President Nitin Gadkari expressed profound grief over the unfortunate incident and conveyed his heartfelt sympathies to the families of the deceased.

He visited Haridwar hospitals where the injured were undergoing treatment.

Meanwhile, Madhya Pradesh Chief Minister Shivraj Singh Chouhan announced a compensation of Rs two lakh each to the families of those who died.

Chouhan, who came to attend the Shatikunj function, also expressed grief over the incident and said his government would provide all help to the victims.

Opposition Congress demanded a compensation of Rs 10 lakh to each victim and said Union Minister Harish Rawat will hold inquiry into the incident and submit a report to the party high command.