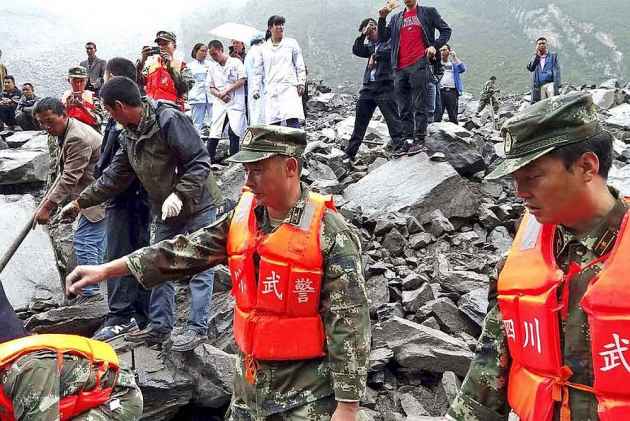 Fifteen bodies have been retrieved by hundreds of rescuers trying to find survivors among 118 people who are still missing a day after a huge landslide engulfed a village in China's Sichuan Province.

Rescuers had retrieved 15 bodies from the debris by 10 pm, the rescue headquarters said.

The search and rescue operation was underway overnight and people have been sent to observe potential secondary disasters.

Geological experts at the site said the chance of survival for the people buried was really slim.

Rescuers were combing the area with life detectors and sniffer dogs but no new signs of life have been found.

"We won't give up as long as there is a slim of chance," said one rescuer.

Xu Zhiwen, executive deputy governor of the Tibetan and Qiang Autonomous Prefecture of Aba said the identities of 118 missing will be soon made public on the government's website.

Xu also cleared up worries that some tourists might be among the buried as the village is in a tourist site.

All 142 tourists who entered the site Friday have reached to safety, said Xu.

The landslide from a high part of a mountain in Aba prefecture hit Xinmo Village in Maoxian County at about 6 am yesterday blocked a 2-km section of river and buried 1,600 meters of road.

The provincial government has launched the highest level of disaster relief response and sent rescue teams to the site.

Currently, more than 3,000 workers with life-detection instruments are engaged in the search for survivors.

The provincial department of land and resources said the landslide was caused by heavy rain. An estimated 18 million cubic meters of earth mass fell some 1,600 meters, engulfing half of Xinmo Village.

Only three people from one family were rescued five hours after the landslide struck. They were taken to Maoxian County People's Hospital and none suffered life-threatening injuries. Another three-year-old child of the family remains buried.

Qiao Dashuai, 26-year-old husband of the family, recalled that he and his wife woke up to cries of their one-month-old son at about 5.30 am.

"Just after we changed the diaper for the baby, we heard a big bang outside and the light went out," said Qiao. "We felt that something bad was happening and immediately rushed to the door, but the door was blocked by mud and rocks."

The husband and wife mainly suffered bruises and their one-month-old son was being treated for pneumonia as he inhaled muddy water.

"I arrived at the site at 7.30 am and found that the whole area was buried by the landslide," said He Dajun, a worker with Maoxian County Power Company.

Another 110 people living nearby in another part of the village were being evacuated to a township school on Saturday night, fearing there might be rain and secondary disasters.

The village was relocated to the current site in 1976 as their previous location was prone to landslides and since then, villagers have been living in two groups in nearby location.

Continue FREE with Ads Pay Rs. 1 to Read Without Ads
READ MORE IN:
International
Next Story : 14-Month-Old Girl Stuck In Borewell For 54 Hours, Pulled Out Dead In Telangana
Download the Outlook ​Magazines App. Six magazines, wherever you go! Play Store and App Store