Boots Off The Ground

Many argue that demilitarisation would help build confidence in Kashmir 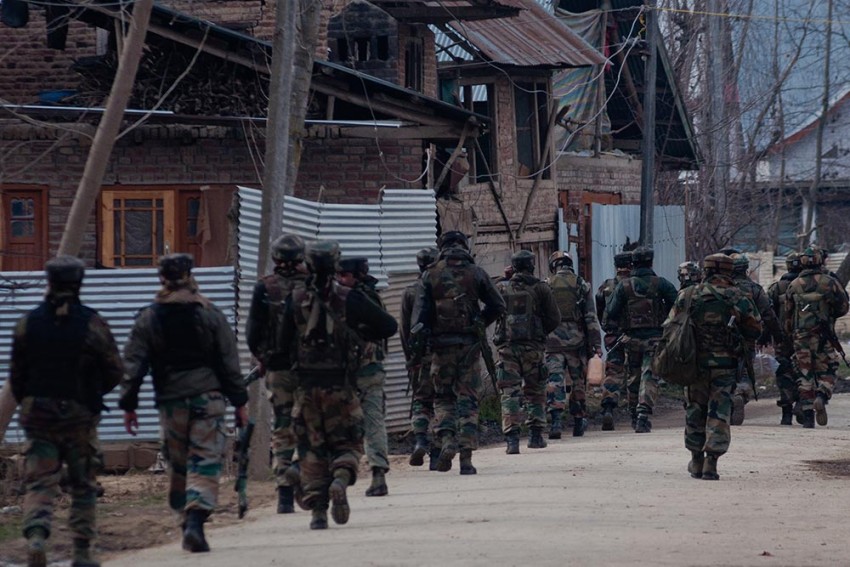 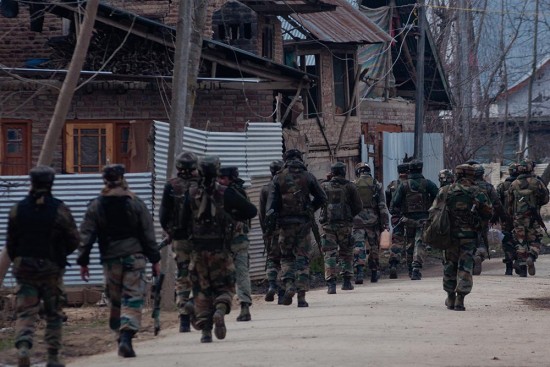 It can happen at any time. Amid an uneasy calm, they go about their business, identity cards always at the ready in a déjà vu harking back a quarter of a century. Fear prevails as they look over their shoulders, knowing that the soldiers might emerge at any moment from their camps planted deep in the poplar fields and apple orchards. The people know they mustn’t be caught with any damning evidence—and this is where the new age shows its face and we see that it’s not just a flashback, as they make sure to erase from their mobile phones any photographs or videos of militants, and indeed anything relating to the conflict.

This is reality in south Kashmir. The numbers of security forces deployed in the Valley are going up each year, according to official sources. Shopian district, which has a high militant presence, saw six camps established last year. Besides the permanent camps, the south Kashmir landscape is dotted with makeshift and mobile bunkers. The security forces have entrenched themselves in civilian areas over the past three years and carry out frequent operations. Cordon and Search Operations (CASO) are now so common that the acronym has entered the popular lexicon. The police say this helps keep militants in check, and there is a litany of outrages against civilians and policemen that they can point to. During the Ramzan ceasefire, militant-related incidents increased by more than 100 per cent from the previous month, while grenade attacks went up by 80 per cent, and around 25 youths were recruited.

The locals, on the other hand, have a different story, alleging human rights abuses and frequent detention of youths. On July 2, the people of Kundalan village in Shopian district, about 70 km south of Srinagar, said they had been living in fear since the new army camp was established in their area. They accuse the army of harassment and physical assault and insist that the camp should be moved elsewhere. Videos—reportedly ­taken by the security forces themselves—often emerge on social networking sites, showing local youths being beaten mercilessly and forced to chant ‘Hindustan zindabad’ slogans.

The presence of security forces in the Valley increased considerably after the killing of Hizbul Mujahideen commander Burhan Wani in 2016, which led to large-scale protests—­­­esp­ecially in south Kashmir—and pushed many young people towards militancy. In a recent blog, security expert Ajai Shukla esti­mated the number of army personnel in Jammu and Kashmir to be around 210,000, a little more than one-sixth of the Ind­ian Army’s total authorised strength of 1,215,049 soldiers. But separatists and human rights groups claim there are seven lakh military and paramilitary personnel deployed in the state, in addition to the police force, making it the most heavily ‘militarised zone’ in the world. The government has never provided a figure, but this level of militarisation is impossible to miss for anyone in the region.

Fozia Qazi, professor of mathematics at the Islamic University of Science and Technology in Pulwama district, addressed the problem in a Facebook post: “Today, I counted 122 military gunmen stationed along the highway stretch bet­ween Lasjan and Barus in Anantnag. A whopping average of more than eight gunmen per kilometre. This is my morning commute to work and your Kashmir math lesson for today!”

And how do the militants stack up? In 1996, according to home ministry records, there were around 6,800 militants from different organisations operating in the state, while former militant commanders claim a figure of 10,000 for 1995–96. In any case, their numbers have gone down over the years and there are currently only around 250 active militants. Separatists argue that the idea that security forces are deployed in huge numbers to tackle these 250 militants is misleading. The actual function of the deployment is to “intimidate the population and keep the population under control,” according to moderate separatist leader Mirwaiz Umar Farooq.

"Securing the border to stop ­terrorists sneaking in is far better than taking the fight to ­villages in the Valley.”
Waheed Parra, Youth president, PDP

What would be the alternative? Mirwaiz says that removal of bunkers and barricades and “the demilitarisation” would be a concrete confidence-building measure. Many are in agreement, including mainstream political parties—especially regional ones—who stress that such demilitarisation, which they gingerly term ‘thinning of the security forces’, would pave a way toward dialogue. Tanveer Sadiq, political advisor to National Conference president Omar Abdullah, says the military’s footprint must be scaled down. “We need to convince an average person that a man in uniform is not his enemy but someone who is there to protect him. We in our tenure were able to do that to a large extent, and the removal of bunkers from various places was a result of that.”

However, BJP state spokesperson Khalid Jehangir argues that Pakistan has always facilitated unrest in Kashmir and 2018 is no different. “We have to see how to save innocent people from getting killed. We called for the ceasefire. They responded to it by killing civilians. The presence of the armed forces is to secure the lives of people,” he argues. “When you use the term ‘demilitarisation’, you involuntarily say that Kashmir is a military zone. This is not the case. The state is ­going through a long-drawn insurgency. The armed forces ­belong to our country, our state; they are our own people, who are out there to secure us from terrorists,” Khalid says.  He ­argues that the security forces and their camps ensure stability in the Valley, and that without their large-scale presence, it would be impossible to think of peace.

Senior police officials agree with Jehangir’s view. While there were fewer incidents of stone-pelting during the Ramzan ceasefire, recruitment of local youths by militant groups and incidents of grenade lobbying rose alarmingly. Around 25 militant-related incidents were reported before the ceasefire was announced, from 19 April to May 16. However, after the announcement, 62 such incidents were reported, including 26 grenade attacks that wounded many civilians and 23 cases of indiscriminate firing by militants, as well as seven civilian killings including that of a prominent editor, Shujaat Bukhari.  The militants also kidnapped and killed Aurangzeb, a soldier who was on his way home for Eid.

Waheed-ur-Rehman Parra, youth leader of the People’s Democratic Party (PDP), has a nuanced take, telling Outlook that the relationship between militancy and militarisation is a chicken-and-egg story. “Some say that initially, the presence of terrorists in the villages necessitated the presence of the armed forces, and others say the armed forces’ presence led to the alleged harassment and ultimately recruitment to militancy,” says Parra. He states that most fidayeen attacks on the security forces have been carried out by foreign militants, who infiltrate the state by crossing the Line of Control and the International Border.  If militarisation is indeed needed, he argues, it is req­uired more on the LoC and IB to stop the infiltration, and not for finding militants in the hinterland of Kashmir. “We often hear that there are so many militants at launch pads across the border ready to infiltrate. If a few steps are taken to secure the border and not let those terrorists sneak in, it is a far better option than taking the fight to villages in the Valley,” he says.

Parra, a close confidant of Mehbooba Mufti, recalls that when bunkers were removed from Srinagar, there was fear it would cause problems. “It didn’t. You created local stakes in peace. The stake in peace is not created by yatra or tourism. Yatra and tourism were in Kashmir when J&K was a princely state,” he says, adding that a military presence only ensures enforceable peace, which proves cosmetic and temporary. He adds that Kashmir shouldn’t be seen as a problem of radicalisation or ideology. “Had Kashmir militancy been all about ideology, you would have people in their 30s joining the militancy. They don’t join. It is a problem of age as the only interface of the youth with the state is either police stations or army camps—and that needs to be changed,” he says.

Speaking anonymously, a senior official asserts that “If the presence of armed men is reduced, youth will have less reason to take up arms.” Logical, perhaps, but what guarantee is there that he’s right—and who will pay the price if he’s wrong?