Himesh is a hit crooner, and now even his film sings. So what gives? 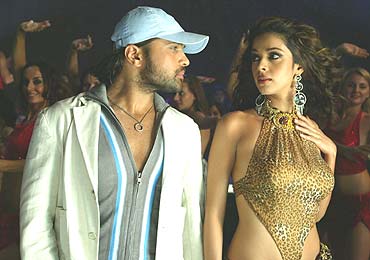 Himesh is Bollywood's Wonder Star, a most unlikely-looking hero who has managed to capture a huge fan base, despite the pronounced aversion to his music and persona among the intellectual elite. "No one had high hopes for Aap Ka Surroor. It's a bad product, but it has pulled it off," says Delhi distributor Sanjay Mehta. Shohini Ghosh, who teaches at the AJK Mass Communication Research Centre, Jamia Millia Islamia, and is a close observer of junk cinema and pop culture, admits to not having "paid attention" at first but now she's amazed at his popularity. "He's an interesting sociological invention," says sociologist Shiv Visvanathan.

It's tempting to explain this via that classic, persuasive, politically incorrect logic: that liking or disliking Himesh boils down to the "class" thing. That he's the kind of guy who people either love or hate: the auto drivers love him; those who drive around in swanky cars hate him. You hear his songs in neighbourhood barbershops, never in chic 'salons'. That he's Bollywood's latest proletarian hero and favourite whipping boy of the aristocracy. Except that there are too many of those who pretend to hate him even as their stereos blare his pop qawwalis behind closed doors—and, admit it, they can be annoyingly catchy.