'You Can't Plan For Miracles' 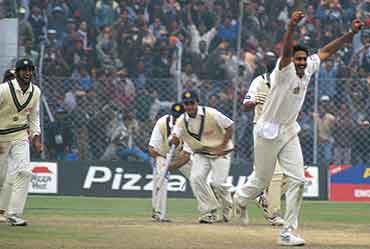 outlookindia.com
-0001-11-30T00:00:00+05:53
The last time Pakistan toured India, Anil Kumble demolished the Pakistan batting at the Ferozeshah Kotla stadium in New Delhi, to take 10 for 74, thereby becoming the first Indian ever to take all 10 wickets in an innings, and only the second in cricketing history. Here, Kumble, who, with 444 wickets, is the highest Indian wicket-taker, remembers February 7, 1999.

Do you think India will have an advantage over Pakistan?
Yes. It will definitely be a difficult task for them to forget the thrashing they have received at the hands of Ricky Ponting & Co in Australia.

So would India then start as favourites against Pakistan?
That would be true to some extent. But we have to play well to establish a psychological advantage.

What are the things that the Indian team needs to do before the series?
Well, we all needed some rest. By now, I think everybody has hit the gym and got into shape after the vacation. Many of us played in the Duleep Trophy and the Challenger Trophy, so we have some match practice under our belts as well. All we need to do is perform collectively. We have to do well in the first Test to put them under pressure. For that we need to do well and lay the foundation in the first innings of the first Test.

Javed Miandad, Salim Malik, Yousuf Youhana, Rameez Raja, Inzamam-ul Haq, Saeed Anwar. Who is the most dangerous Pakistan batsman you have bowled to?
I never bowled to Miandad in a Test match. Among the other greats you have mentioned, I would pick two. Inzamam and Saeed Anwar have always tried

to dominate the bowling. Whenever players of their quality get in, things start to drift.

Last time, when Pakistan came here, you got a 10-wicket haul in an innings...
Good to know that people still remember such an achievement. I suppose, it's because I became only the second bowler to achieve that unique feat, people still talk about it even though five years have passed. I will certainly remember it forever.

Did you ever dream of getting 10 wickets in an innings?
No, you can't plan for such miracles. It just happened.

Wasim Akram has lamented that he could not take 10 in an innings...
What a bowler Wasim was! One of the best of our time. But I am sure Wasim will also agree that luck plays a major role behind such a miracle. I am lucky in a sense that even someone as great as Wasim could not achieve it.

When did you actually believe you could get all 10?
I could not even imagine I would get 10 even after getting the fifth wicket. My team members started telling me to go for 10 after the seventh wicket—that of Salim Malik—fell. It was then that I felt getting all 10 was a possibility.

You have said many times that Shahid Afridi and Wasim Akram's wickets were the most crucial wickets in that particular innings...
It was because Afridi and Anwar had a partnership of 100-plus runs. We needed to break that partnership to win the match. So Afridi's wicket was very important at that particular juncture. So was the last. It was Akram's wicket which gave me the record.

Do you know much about Jim Laker, the England player who had achieved this feat first?
Yes, I have read about Laker. He was an off-spinner who took 19 wickets in that match. It is unfortunate that I never got a chance to meet him.

Which one would be at the top of your list—500 Test wickets or 10 for 74 against Pakistan at Kotla in 1999?
Let me reach 500 first, only then will I make a comment. While I certainly want to reach 500, by then, 10 wickets in an innings will remain my most important achievement on a cricket field.