You Can't Bank By This River

Gods or foreign athletes can occupy Yamuna Pushta, but the poor? They just don't make the cut. 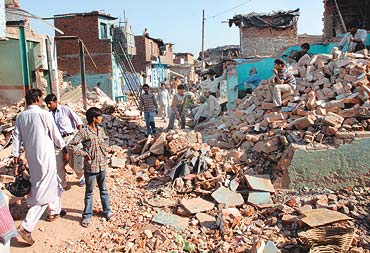 India is changing. By 2050, over half of Indians will live in cities. Of these, nearly 350-400 million will live in slums. Relentless urbanisation and a booming economy mean that housing the poor in our new megacities is one of India’s most critical developmental and human challenges. Our response so far has been less than heartening. The right to live and belong to the city, whether as a poor rural migrant or a trader seeking commercial space to join our much-touted economic boom, seems to belong to a privileged few. Even these few are chosen by criteria, laws and planning procedures that remain, at best, ineffective and opaque and, at worst, violent and discriminatory.

In 2004, the homes of nearly 40,000 families in Yamuna Pushta, a string of slum colonies on the banks of the river behind Old Delhi, were demolished with little or no notice. A settlement of 1,50,000 people that had existed, in some parts, for nearly 40 years, was labelled an "encroachment" by the Supreme Court, which ruled that the settlement violated the DDA Master Plan. The river bed, they said, was not meant for construction and habitation. Yet this same river bed apparently is a perfect site for a mammoth temple built, yet again, in violation of the Master Plan, as will be the games village and new hotels for the 2010 Commonwealth Games, and, in the greatest of ironies, the Delhi secretariat. God and foreign athletes apparently have a (highly subsidised) place to live in Delhi, but the urban poor simply don’t make the cut.