You Are (Really) Here

With the new tracking device in mobiles and cars, you can’t be lost 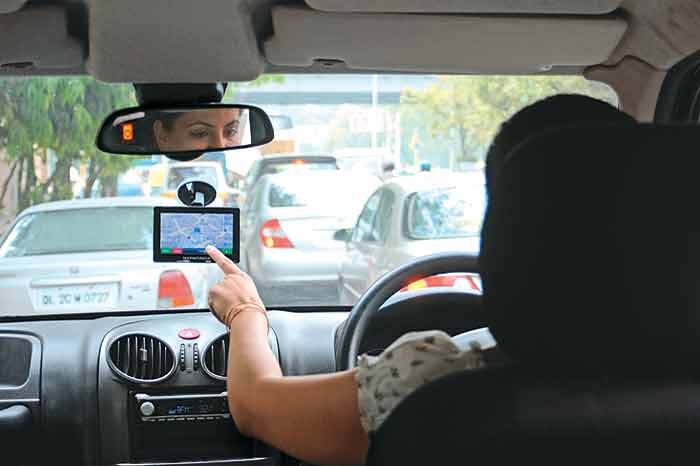 Urban folklore has it that “figuring out directions” is one of the top reasons for spats between couples. That’s now set to change for Indians on the move as Global Positioning System (GPS)-based navigation catches on across cities. The technology, which works via satellites, enables users to go from point to point using the cleanest and fastest routes. It also serves up restaurants, cinemas, hospitals and recreation centres around the place a user is travelling in. Why, some social networking sites are even using GPS to “connect” people in the neighbourhood.

“It works in multiple ways,” smiles entrepreneur Nicco Bhabu, an avid user of Google Maps while driving. “The man gets a smart toy to play around with. And the woman gets the man to defer to the map.”

The trigger for a spurt in usage over the past year is the humble mobile phone. Earlier, GPS-based navigation barely had takers—the concept of organised navigation hadn’t taken hold, it was available on expensive gadgets and didn’t work too well. Now, big handset makers like Nokia, Samsung and Motorola provide maps on their handsets. Even newer players like Micromax, which makes low-cost feature phones, have logged on. “The mobile phone will be a key enabler in the gaining popularity of GPS among Indian consumers,” avers Faisal Siddiqui, country head, mobile devices, Motorola India.

So how big is India’s GPS navigation pie? Industry analysts say India will follow the same path as other countries where GPS is a way of life. Explains Rohan Verma, director, Mapmyindia: “Three years ago, China was a 4,00,000 units market. Today the number has risen to four million. The US and Europe stand at 20 million devices. In India, we will see a similar trend in the next few years. We expect to sell more than 1 lakh GPS navigation devices by the year-end.”

“We don’t have a law on location-based services nor on privacy. If your privacy is violated, there’s no remedy.”
Pavan Duggal, Cyber law expert

One of the biggest roadblocks for the service in India was the absence of digital maps. This has changed dramatically over the past year or so. Today there are at least four companies with a comprehensive database of India maps with the barest details possible while many others are in the fray covering niche areas and specific services. Mapmyindia, for instance, claims to have the largest database of 600-plus cities, while Navteq, which provides mapping support to Nokia, currently has maps of 84 cities. Motorola, the latest entrant with its Motonav services, offers maps for 401 cities.

And then there is Google. Like the internet behemoth’s other services, Google Maps is free. That’s partly why it has a big following (unlike other navigation services which work directly through GPS, Google Maps is dependent on mobile internet). That’s prompted other service providers to change tack. Recently, Nokia made its Ovi maps and navigation free. Motorola also offers lifetime free access to fully voice-guided street-level navigable maps in India.

The move to push GPS adoption is also coming from the government. According to sources, the government is planning to make it mandatory for public transport to become GPS-enabled to help tracking of vehicle movements. In Delhi, moves are already afoot to make the public bus service GPS-enabled before the Commonwealth Games in October. There is also thinking within the government to get new private and passenger vehicles within the fold—like it is in the US and Europe. Currently, GPS is voluntary for cars.

Only a few vehicles, mostly high-end ones, come with this facility. But by the end of this year, more vehicles, including some basic models, will don GPS facilities. Once that happens, the government would not only be able to monitor the location of a car at any point of time, but also utilise the satellite for traffic management and monitor speeding, illegal driving and thefts. Looking at this, insurance companies are also discussing schemes where vehicles with GPS equipment will get discounts on their insurance packages.

To have control over GPS activities in India (currently, the services are available via US satellites), the government (or more specifically, ISRO) is also working towards launching its own satellites. The project is supposed to be completed by the end of next year. The first of these satellites, however, met with a setback when the rocket carrying it crashed earlier this month.

GPS and navigation-based social networking services is another factor pushing this technology among younger people. “There is a new dimension of ‘where’ in social networking...people are not just looking at who is online but also at their location,” says Jasmeet Gandhi, head, services marketing, Nokia India. Social networking applications like Four Square, for instance, awards points to users for disclosing their location.

And therein lies the problem as issues of privacy have come to the fore. Sure, GPS exists in other countries—but they have strict privacy laws. “In India, we don’t have a law on privacy yet and law has not evolved on location-based services. If your privacy is compromised, there is no effective remedy,” says noted cyber law expert Pavan Duggal. So, people using location-based services run the risk of misuse. And of course, a person’s geographical location can easily be misused.

Adds digital entrepreneur (and digital trend spotter) Prashant Mohanachandran: “The biggest problem is that most of the social networking sites allow feeds to be picked up externally and people don’t realise that they are opening themselves to the world.” With GPS services increasing exponentially, these questions will only multiply.

It’s still not clear who—the IT or the telecom ministry—will actually look into the issue and provide remedies. Says cyber evangelist Mahesh Murthy: “It is our legal right to say that we do not want to be tracked but in a country where the Do Not Call system has not worked, the effectiveness of such a law is doubtful.” One thing is clear: GPS-enabled services are on the cusp of a boom, opening up a large market for location-based services. But, knowing the direction this could all lead to, some valid privacy concerns need to be quickly answered.