Home  »  Magazine  »  Society  » Interviews  » Outlook Social Media Awards »  ‘Yes, My Open Letter To My Granddaughters Turned Out To Be A Good ­Promotional Tool For Pink!’

‘Yes, My Open Letter To My Granddaughters Turned Out To Be A Good ­Promotional Tool For Pink!’

Amitabh Bachchan, supernova of the Year 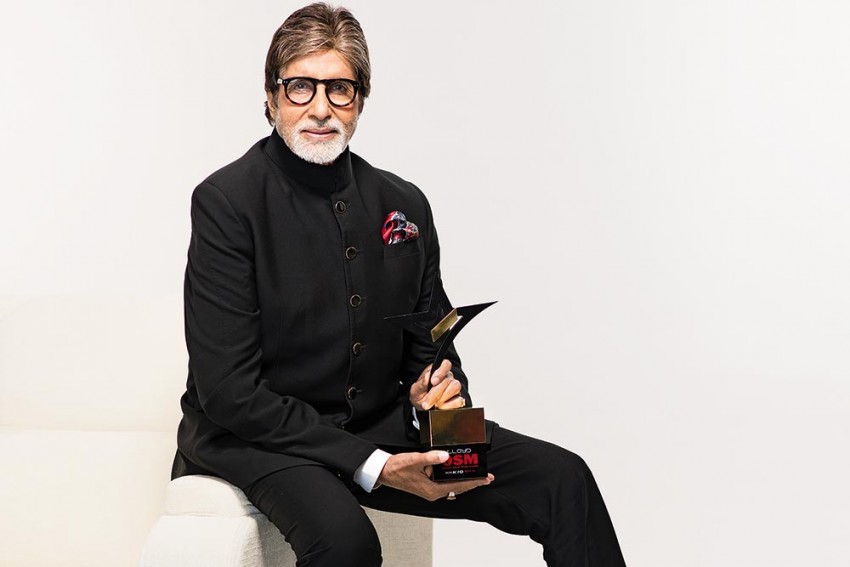 Photograph by Rohan Rajan Pingle
Giridhar Jha October 07, 2016 00:00 IST ‘Yes, My Open Letter To My Granddaughters Turned Out To Be A Good ­Promotional Tool For Pink!’ 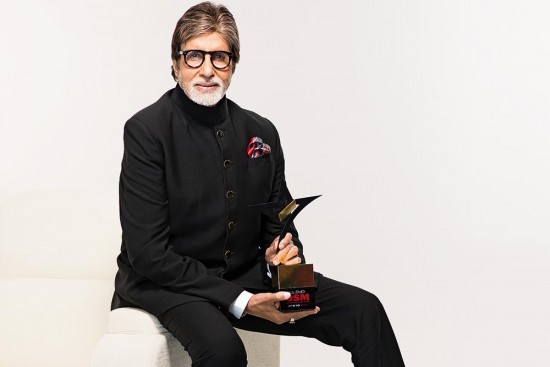 In conversation with Giridhar Jha, OSM Supernova of the Year Amitabh Bachchan talks about his movies, politics and the controversies coming his way

With Piku and Pink, your career is in an altogether new phase. You have enjoyed phenomenal popularity over the years, but do your recent movies revolving around socially relevant themes give you more satisfaction as an artiste than ever before?

I am satisfied with whatever I get to play in the films I work in. If they turn out to be socially relevant, I am happy. It’s a bonus. However, I do wish to question the veracity of your question. Do you think the films I worked in earlier were not socially relevant? Our films have always shown that good shall prevail over evil and justice shall be given to those who are right over those who are wrong. And also that there shall be poetic ­justice—all within three hours. You and I will never get that in a lifetime, perhaps several lifetimes!

Our films have always ­indulged in this sort of utopian social relevance. That has been the strength of Indian cinema through the 100-plus years of its existence. Cinema in India has been a unique phenomenon, and shall ­continue to be so. Its longevity proves that.

In your ‘angry young man’ days, most of your movies did not have meaty roles for actresses. But now you are part of films that have substantial roles for women. How do you see this transition?

Firstly, I am not in favour of these dramatic epithets and titles that get ­devised against my name. For each so-called ‘angry young man’ role in a Zanjeer or a Deewar, there was always an Amar Akbar Anthony, a Chupke Chupke, a Namak Halal or a Sharaabi, and each one of them had substantial roles for women. If the hero in each of these films was winning over the leading lady, it naturally means there was sufficient ­substance in the lady to be wooed by the leading man. The amount of effort he goes through to win the love of his lady, in those three hours, is enough proof of the importance of the woman he is pursuing. It is the standing of the actress in the story and screenplay of a film that reflects the so-called meat that you refer to. There has been no transition.

The subjects you are choosing now are different from the ones you did 10-15 years ago. Is there a conscious effort to do only meaningful cinema and avoid the usual ­commercial vehicles?

I shall be stepping into my 75th year in a few days. Fifteen years ago, I was younger. At 75, age chooses the part, not vice versa. At 75, what I do now is what I shall get. The only conscious effort in such situations is time. Time shall decide when a sportsman needs to stop his sport and an actor to stop his. Physicality is the decider. If your body is incapable of pursuing a particular sport, you will have to stop because someone younger and far more physically capable will take your place. Films follow a similar pattern. When your body is not accepted physically by the audience, you will have to stop. Another younger, better-looking and more capable actor will replace you.

For me, all cinema is meaningful and the term ‘usual commercial cinema’ is a misnomer; there is a box office quotient in every film ever made. There is nothing unusual about it.

Why do you think the new kind of movies are running to packed houses now? Has the audience turned more ­mature than in the days when women-centric films rarely ruled the box office?

Films that run to packed houses are the ones that enjoy the patronage of the masses. They have been responsible for packing or not packing the movie theatres. When they like a film, they see it in big numbers. What would you call a ­women-centric film? A Mother India, a Sujata, a Queen or a Piku? These are gender-surnamed preferred titles. But to me, as I explained earlier, there is ‘gender-centricity’ in all the films where a leading man and woman are deployed or ­depicted. Was a Chaudhvin ka Chand or a Guddi talking about men? Or a Bhabhi or a Chhoti Bahen?

After Piku, you said you were not the highest paid artiste in the film, in an apparent reference to its lead actress Deepika Padukone. For somebody who was once referred to as a “one-man industry”, has it come as a surprise to you that actresses are finally getting their due not only in terms of roles but also remuneration?

This response was in the context of a question asked of me on the salary ­inequality between male and female ­artistes. The interviewer told me that ­female artistes get paid less than their male counterparts. I responded by ­saying that this was not factual–Deepika Padukone was paid more than me in Piku. What is alarming or questionable about that? She is a bigger star than me, she attracts better attention at the box office than me, she demands a certain salary and gets it. Period. And just ­because a smart journalist devised a headline (“one-­man ­industry”) for his article on me, it does not become a ­reference of fact for me. I have neither believed nor accepted the sobriquet!

You have a massive following on social media and stay in constant touch with your followers, responding to their comments and ­suggestions. Has you direct interaction with them changed your perception about your fans?

Fans are a reflection of your deeds. If they have liked what you say and do, you honour and greet them, admire them, love them. My interactions with my well-wishers on social media have been a huge revelation and a great learning. Their feelings, impressions and wisdom need respect. I make an effort in my small way to be able to give to them what they desire at times. It is not always possible to comply successfully, but I do try. This has been my perception of the fans, from the very first one that came into my professional life. And it shall be so, until my dying days!

You have consciously steered clear of politics for more than 25 years but, every now and then, your name is dragged into political controversies, be it for the role of brand ambassador of Uttar Pradesh or the advertisement for Gujarat tourism. Do you give your nod to such projects because of your personal equations with different leaders or for purely professional considerations?

“To me, there is ­‘gender-centricity’ in all the films where a leading man or woman is ­deployed.... Was a Chaudhvin ka Chand or a Guddi about men?”

Leaders will come and go; the state and the country shall ­remain forever. Yes, I did enter politics and later left it ­because of my inadequacy and complete failure in it, never to come back. My pro bono voluntary involvement in a ­particular state or country campaign or vehicle has been on the invitation of those who have been given official charge of the region. My profession invites recognition among the public, which incidentally also includes political leaders, and when they seek your involvement in projects that could ­enhance their respective regions or the nation as a whole, I willingly do it. I do it because it is my country, a state in my country. If I am asked to, I would do that for any region. There are no “personal equations” or “professional considerations”. My personal equations are with my country, India. My professional considerations are voluntary and pro bono­—just in case you were referring to or hinting at the fees that I charge for such work. Well, work is an ugly word in this context. For me, it is a privilege and an honour.

You have been a brand ambassador of several products over the years. Do you think that celebrities should be held accountable for the quality and performance of each and every brand they endorse?

There has been recent talk on the ­legality of this issue, and we await ­formal legislation. If and when that is formalised, I shall be in a better position to answer this query.

Some people have alleged that the open letter you wrote to your ­grand­daughters recently was a bid to promote your film Pink. Does such criticism hurt you?

Criticism is always most welcome. Without it, we would all be as close to ­divinity as the gods. We are humans, not some divine force! The letter came about as a result of the various interviews we were doing during the promotional activity of the film, Pink.

We were continuously being asked what the film was about, what Pink meant, why this particular name and so on. Unable to relate to them the answer they desired, while at the same time taking care not to reveal the story of the film, which we wanted to protect because it was a thriller, Shoojit Sircar (the producer of the film) felt it would be a good idea to put across the essence of the film through a letter.

It was Shoojit ­who suggested that I should write to my granddaughters. So we thought out the content and put it out. It answered many a question and yes, it turned out to be a good promotional tool! Promotions, promoting, promote...these words have various connotations that can be debated over, perhaps on another occasion!

You have rarely taken on your detractors even when you are wilfully targeted. You accepted Justice (retd) Markandey Katju’s recent criticism of you without saying anything in retaliation. It clearly shows that offence is not the best form of defence in your scheme of things?

I would retaliate if there was ambiguity on fact. There wasn’t any in the remark of the honourable justice. What offence would one use to defend fact? Facts are facts, you just have to admit it! Does not every response of mine to your questionnaire amply endorse my empty-headedness?