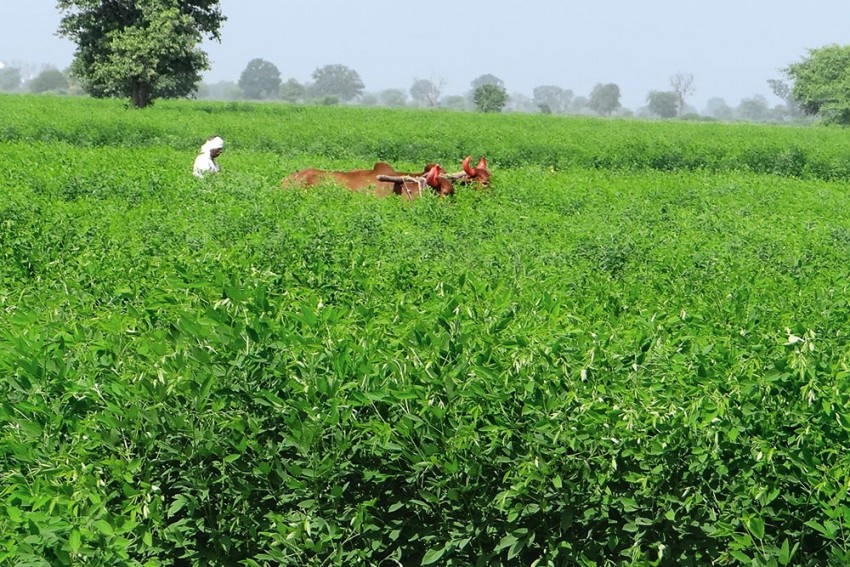 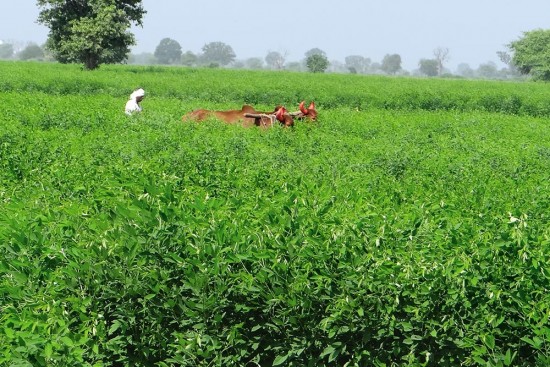 Last year’s monsoon did sprout many a dream in the minds of Maharashtra farmers. The rains were above average and spread out evenly, bringing huge relief as well as enthusiasm among growers of crops in the state’s Marathwada and Vidarbha regions. After four years of drought and sparse cultivation, several farmers paid heed to consistent and necessary persuasion of growing tur dal instead of sugarcane or cotton that needs more water.

With the prices of the dal—or pigeon pea, also called arhar—touching Rs 10,000 per quintal last year, the farmers sowed tur in anticipation of finally making up for the losses of the past few years. That hope has gone topsy-turvy now: the production is surplus. It is 20 lakh tonne this time compared to four lakh tonne last year. The five-fold inc­rease has thrown everyone off the track and the problem of plenty has shown no sign of solution, even as the next season is around the corner.

Among several districts in arid Vidarbha and Marathwada, which collectively pro­duce over  80 per cent of the state’s tur dal, the scene is gloomy outside some of the collection centres. There are winding lines of tractors that make for a parallel system of taking turns to guard the produce. One has to keep a tab on the centre and also rush back home for preparation for the next season. These are causing farmers an individual additional expense of Rs 1,000 per day. Many are still holding on to their stock at their homes, waiting for the government-run centres to accept their produce at the minimum support price (MSP). A majority of tur producers are small farmers and have non-irrigated fields with less access to water, forcing them to rely on less-demanding crops like pulses over sugarcane and cotton.

One of the thousands of such farmers is Kalyan Mote. From his Sumbha village in Osmanabad, he has made several trips to the collection centre, 34 km away, but is yet to dispose of his 35-40 quintal of tur, which he got on his 10-acre farm, a bum­per crop. “First we were told the centres do not have enough bardana (gunny bags), then the centres were closed beca­use they did not have space to store. For us the nearest private market is Latur, where traders are refusing to take our stock. It is already mid-May, and time for the next season,” says Mote, who has a crop loan of Rs 2 lakh and another loan of same amount taken to build a house on his fields. He is worried about depositing the stock in the open because of the risk of damage, thefts and delayed payments. Activists and farmers claim delays of up to two months in payments at the procu­rement centres, thus dissuading farmers who need money urgently.

In March, when Outlook visited an Osmanabad collection centre, the farmers managing it spoke of a range of hazards in taking care of the stock left in the open. Not different was the case in most nearby areas. Undoubtedly the procurement has been more than ever, nudging National Agricultural Cooperative Mark­eting Federation of India Ltd (NAFED) to start 100 more centres to procure 1 lakh tonne tur before May 31. 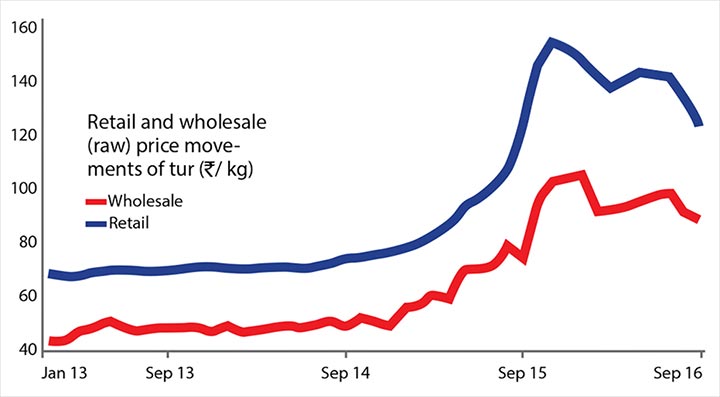 Veena Singh, the NAFED branch manager in Mumbai from where the entire procurement has been monitored, says price stabilisation is the idea behind the process. Till this April 22, four lakh tonne tur had been procured, of which NAFED’s share was 3.21 lakh tonne. “Even now farmers are holding tur; so the department of agriculture too is procuring. After the announcement to procure more came on May 8, we collected 20,000 tonne in five days. We will be able to collect 1 lakh tonne tur by May 31,” she says. “We have had 100 centres; there will be another 100 centres.” That would take estimated total procurement to 5 lakh tonne, still a far shot from actual production estimated at 20 lakh tonne. The state government has collected 50,000 tonne.

Activists and farmers allege that the lack of preparation smacks of lack of pol­itical will. Veteran farmers’ activist Vijay Jawandia says he had raised this issue as early as in last August, exhorting the government to protect farmers in the event of surplus production. “Why have they not opened exp­orts? Why not increase the import duty? Despite the bumper crop, the country is short of what it needs. Why can’t we ensure that the farmer gets MSP?” says Jawandia, who himself sold his produce in the private market at Rs 4,300 per quintal. “When the government said it will do satellite inspection for crop insurance, didn’t it have an estimate of the production?”

Let alone farmers’ activists, chief economic advisor Arvind Subramanian had called for rapid and sustainable enhancement in domestic productivity and production. His September 2016 report had cited these as the “only reliable way” to minimise volatility in prices of pulses so as to safeguard the interests of farmers as well as consumers.

“There need be no serious conflict in the medium run between the interests of these two groups. Short-term actions that apparently benefit consumers end up hurting them because production and availability of pulses decline over time. In turn, better incentives for farmers in the form of higher MSPs (to reflect the true social value of growing pulses compared to other crops) combined with eff­ective procurement offers the best way of increasing domestic availability and preventing price spikes,” it said. “The current crisis offers a rare opportunity to show that government intervention, esp­ecially procurement, can be effective bey­ond rice and wheat. It is also a rare opportunity for pulses to get the policy attention it deserves.”

While activists are nudging various systems to take note of the possible surplus, BJP state head Raosaheb Danve put his party in a spot this month by commenting that farmers “continue to crib despite so much procurement (tarihi radtat salein… [the rascals still cry]). The Jalna MP did apologise, rather belatedly, and kicked up public memory about senior Nationalist Congr­ess Party leader Ajit Pawar making a similar statem­ent four years ago: about people needing to urinate in dams to make up for the water shortage.

Danve’s May 10 outburst prompted activist and Congress worker Hanu­mant Pawar, along with five others, to protest in front of the parliamentar­ian’s house at Bhokardhan in Jalna district for two days. He claims farmers supporting them were generally disallowed to physically join the stir. “One could feel the terror when we were not able to buy water, hire a mandap for protest and fast,” Hanumant says. “Cops detained us; we didn’t get permission for a peaceful protest. Yet we went ahead with the plan as children of farmers.” 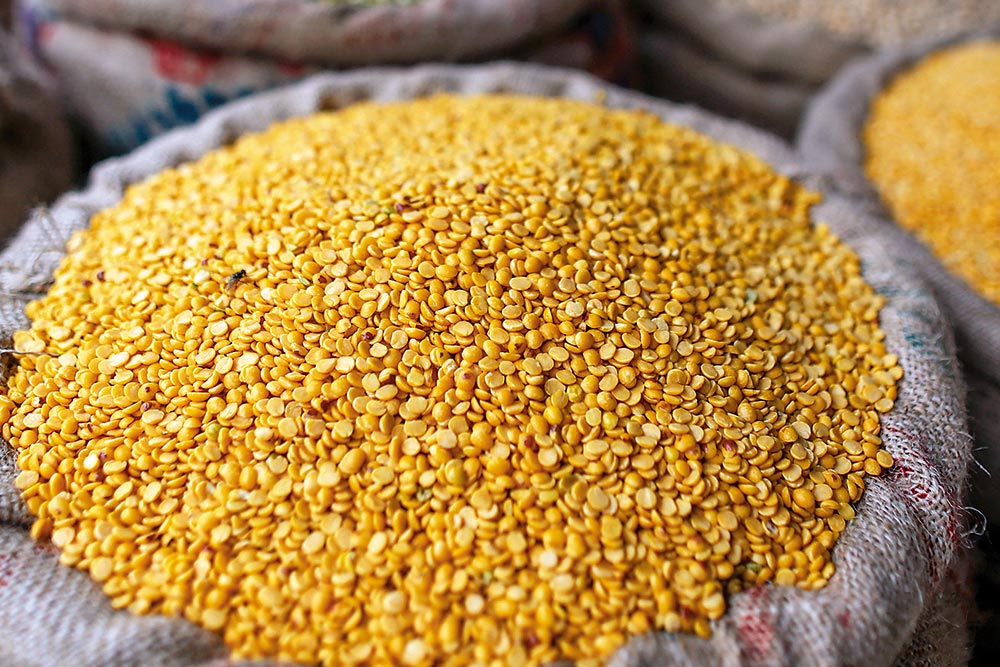 Procurement of tur dal is beng carried out to stablise its prices. For now, it will be on till May 31 in the state.

Former Congress chief ministers Prithviraj Chavan and Ashok Chavan have both criticised the present government for the tur crisis. In an attempt to explain the crisis, present CM Devendra Fadnavis has said the procurement has been riddled with serious financial irregularities to the tune of Rs 400 crore, wherein traders have sold their stock, purchased at much lower prices to the centres at the MSP, thus pocketing the difference as profits.

To cite an example, Subhash Desh­mukh, state minister for coop­eration and marketing, speaks of having found 1,400 quintals of tur lying unclaimed at one centre. So, what’s the action taken? “No we need to conduct raids to check this, but so far we haven’t found any culprit,” he shrugs. “Anyway, we will do whatever we can to help the farmers. We are still trying to see if the dates can be extended.” What happens to the tur that is not procured by May 31? “We will see, but it will be clear only after May 31. We cannot say anything now.”

There are takers for such assurances, but not all. A farmer named Nathrao Golde, for instance, went and sold his produce to raise funds at Rs 3,900 per quintal. He wasn’t alone. “We got little over 14 quintal in 1.5 acres, but we had to raise funds so that my son could buy a plot,” Golde says. “The centres were shut and they were not accepting anyone after April 22. So I sold the tur off in the private market, where I would get money within a week.” The farmer also ackn­owledges that they had never got such a bumper crop and so he is not complaining despite the lower rate. “Procurement must happen and so should the implementation of the MSP. All that by February or March, ideally.”

What should have been sorted by end-­February has spilled over to May and will possibly extend till June. In the absence of liquid cash and functional district coop­erative banks, the farmers may end up selling the stock at lower rates to get ready for the sowing season. In the meanwhile, retail grocery stores in Mumbai have tur priced at Rs 120 a kilo.

By Prachi Pinglay-Plumber in Marathwada and Vidarbha

At Peace With Strife