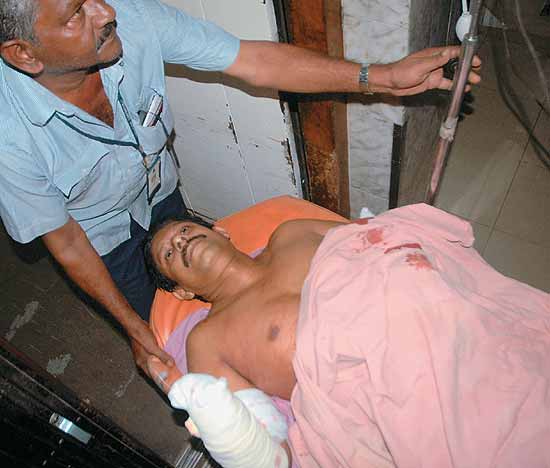 As professor T.J. Joseph of Newman College, Thodupuzha in south Kerala, recovers in hospital after a 15-hour surgery to reattach his right hand—hacked off by alleged Popular Front of India (PFI) assailants—questions are being asked over how a Taliban-model, cold-blooded  attack could take place in public and in broad daylight in what is one of India’s supposedly better policed states.

The police have arrested two PFI activists and the search is on for the other assailants. The attack, apparently, was in retaliation for a blasphemous question set by Joseph in the Malayalam semester examination paper for BCom students. Joseph, who education minister M.A. Baby later called a “fool”, set the question based on a short story by CPI(M) leader P.T. Kunju Mohammed about a village madcap who questions god. The students were asked to punctuate a passage from the story. But the nameless mad man in the story was referred to as Mohammed by Joseph while setting the paper. That was enough for the local edition of the Jamaat-e-Islami’s newspaper to carry a prominent report, sparking off the controversy. Soon, the Campus Front, the PFI’s student wing, launched an agitation. That was in March.

In the past few years, there have been many attempts by fringe Muslim outfits to lead the community astray.

Events took the usual course after that. The college authorities suspended the teacher, the Catholic Diocese apologised, the teacher surrendered and the police booked him for “creating religious hate”. But the real reprisal came three months later, on July 4. All political parties have condemned the barbarity. But neither the PFI nor its political arm, the Social Democratic Party of India (SDPI), have spoken out against the incident. Instead, its activists have been busy staging protest marches against the police raids.

But why did Joseph set such a question? Wasn’t he aware that it would hurt religious sentiments? Some say it was innocuously done. Others point out that the professor, who is close to the CPI(M), did not get on well with the college authorities and set the question to create trouble for the management. There is still no clarity on Joseph’s intentions.

His family, it seems, always anticipated trouble and had even filed police complaints citing a threat to Joseph’s life.  A confused police force had also dithered in arresting suspects even after a report that they had gone to the professor’s residence and done a recce days before the attack. Sources say even the state intelligence had warned the police that the situation was communally sensitive. Had the police acted, perhaps the attack could have been prevented.

But the police ignored the warnings. Says former DGP K.J. Joseph, “It’s unthinkable that an incident like this should happen in Kerala, that too in broad daylight, and three months after the initial provocation. It’s because the assailants believed they could get away with it. The blame rests squarely on the police for allowing such an impression to build up.”

In the past few years, there have been many attempts by fringe Muslim outfits to lead the community away from their  mainstream party, the Muslim League. The SDPI is the latest avatar of this, ready to play extremist politics in a state where Muslims make up a quarter of the population. Renowned litterateur M.N. Karasseri, himself a retired professor and someone who keeps tabs on Muslim politics, says, “The Muslim youth today are looking for idealism and adventure. They are being misguided by the proponents of Maududism that espouses a do-or-die battle for ensuring hukumathe ilahi (the rule of Allah). The SDPI, Jamaat and several other outfits subscribe to this philosophy. If the rest of society does not realise the inherent danger, more Taliban-model reprisals will follow.”