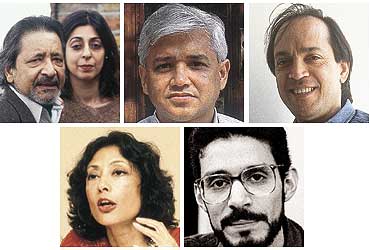 outlookindia.com
-0001-11-30T00:00:00+0553
February 2002 will be a memorable month in Himachal Som's eventful career. The country's ambassador-designate to Italy is between ambassadorial jobs. But the one that he is about to relinquish is dearer to him because it marks a major milestone in the history of literary India. As the outgoing director-general of the Indian Council for Cultural Relations (ICCR), he is capping his long tenure in the country's foreign service establishment with an event, the likes of which have never been held on Indian shores. "No bureaucrat can do this kind of a thing alone," says he, even as his organisation readies to co-host the country's first-ever conclave for Indian writers, irrespective of passport loyalties. Originally planned for December 2001, the International Festival of Indian Literature had to be rescheduled because of post-9/11 obsessions with war, fundamentalism and the war on fundamentalism.

Now as Som and his team sit poring over arrangement details of the six-day conference, beginning February 18 at the Vigyan Bhavan, the excitement is palpable. For, never before has the native literati obsessed with Indo-Anglian writers seen a guest list this long and this impressive. V.S. Naipaul, Vikram Seth, Pico Iyer, Rohinton Mistry, Amitav Ghosh, Amit Chaudhuri, Gita Hariharan and Bharati Mukherjee will be there. Salman Rushdie and Shashi Tharoor will not be able to make it because of their international commitments. Jhumpa Lahiri wanted to come but is pregnant. Among the participants living at home are Arundhati Roy, I. Allan Sealy, Dom Moraes, Khushwant Singh, Manju Kapur, Manjula Padmanabhan and Upamanyu Chatterjee. Writer-columnists like Farrukh Dhondy and Imtiaz Dharker will also be there. Literary critics of prestigious publications such as David Harspool of the Times Literary Supplement, Nancy Sladek of the Literary Review, David Pryce-Jones of the American litmag, National Review. Robert Silvers of the popular New York Review of Books is yet to confirm his participation. There were efforts to further internationalise the event by roping in J.M. Coetze, Gunter Grass, Seamus Heaney and Toni Morrison but they had other plans.

But it's not merely meant to attract attention by virtue of big names. The meet is also an effort to make Indian language authors feel 'at home in the world' (also the theme of the conclave). Considering that their lot continues to grapple with media invisibility and the slights of Indo-Anglian authors—the worst among whom was Rushdie in his trashing of Indian language literature some years ago. In that, the conference is more of a conciliatory handshake. A sort of recognition of the fact that most Indo-Anglian writing is essentially a translation of bhasha (language) idioms and thought patterns.

Among the leading lights of bhasha literature who will participate in this interface are Malayalam writer M.T. Vasudevan Nair, Bengal's prolific Sunil Gangopadhyay, Assamese writer Indira Goswami, who recently received the Jnanpith, Nayi Kahani doyens like Nirmal Verma and Krishna Sobti, Marathi playwright Vijay Tendulkar, Oriya poet Ramakanta Rath, chronicler of Punjabi angst Dalip Kaur Tiwana and Kannada writer U.R. Ananthamurthy. But what's really disconcerting, if one glances through the conclave's tentative programme schedule, is the scant attention issues and concerns close to Indian writers have received. But Som's defence is that "it's all tentative and we are open to suggestions".

The other spinoffs of this lit fest include the institution of a biannual award for writers from the diaspora, a 13-episode author portrait series for Doordarshan, a 30-minute documentary on the meet by Rajiv Mehrotra and a coffee-table book on the authors. An anthology called Mosaic is also being planned to etch the event in the reading public's memory.