Marjorie Taylor Greene, the newly elected Republican House representative in the US, ticks all the wrong boxes: she has racist, anti-Semitic and anti-Islamist views. Can the Democrats get rid of her? 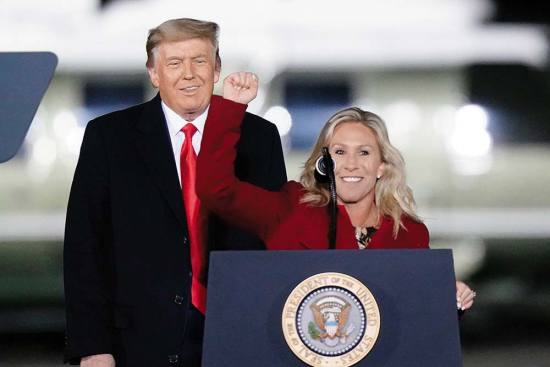 Democrats are mounting an effort to formally rebuke Marjorie Taylor Greene, a newly-elected Republican House representative from Georgia with a history of making racist remarks, embracing conspiracy theories and endorsing violence directed at Democrats. Some Democrats have called for expelling Greene from the House—an unlikely outcome that would require backing from Republicans, since expulsion requires a two-thirds vote. Another option is censure, reports the Associated Press.

Democrats’ willingness to act against a member of the opposing party underscores their desire to confront far-right politicians, like Greene, who are closely aligned with some of former president Donald Trump’s fringe supporters, including extremist groups that were involved in the violent Capitol insurrection. It also shines a light on the GOP’s reluctance to punish Trump supporters in their ranks for fear of alienating some of the former president’s most ardent voters.

The Georgia Republican has expressed support for QAnon conspiracy theories, which focus on the debunked belief that top Democrats are involved in child sex trafficking, Satan worship and cannibalism. Facebook videos surfaced last year showing she had expressed racist, anti-Semitic and anti-Muslim views. Top Republicans denounced her at the time, hoping to block her from capturing the GOP nomination in her reliably red congressional district in northwest Georgia. But after she won her primary, they largely accepted her.

In recent years, she ‘liked’ Facebook posts that advocated violence against Democrats and the FBI. One suggested shooting House Speaker Nancy Pelosi in the head. In response to a post raising the prospect of hanging former president Barack Obama, Greene responded that the “stage is being set”. In an undated video posted online, Greene...